Tech Jobs in Lithuania: What are employers looking for in 2020? 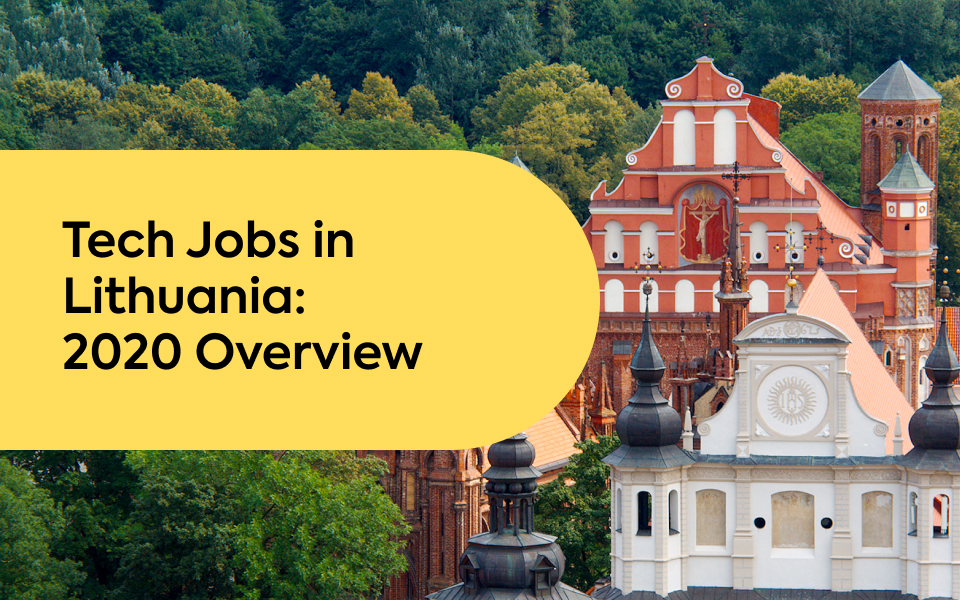 Lithuania recently celebrated its first unicorn, as the second-hand fashion market place Vinted reached the magical 1 billion valuation mark last November. This was not a fluke by any means, however, rather an event that was long overdue, as the country has become the hotbed of fintech, with global players opening their local hubs and new exciting startups popping up everywhere in the capital city Vilnius.

Looking at the job market statistics in MeetFrank and researching the local job market, here are some of the highlights we discovered: 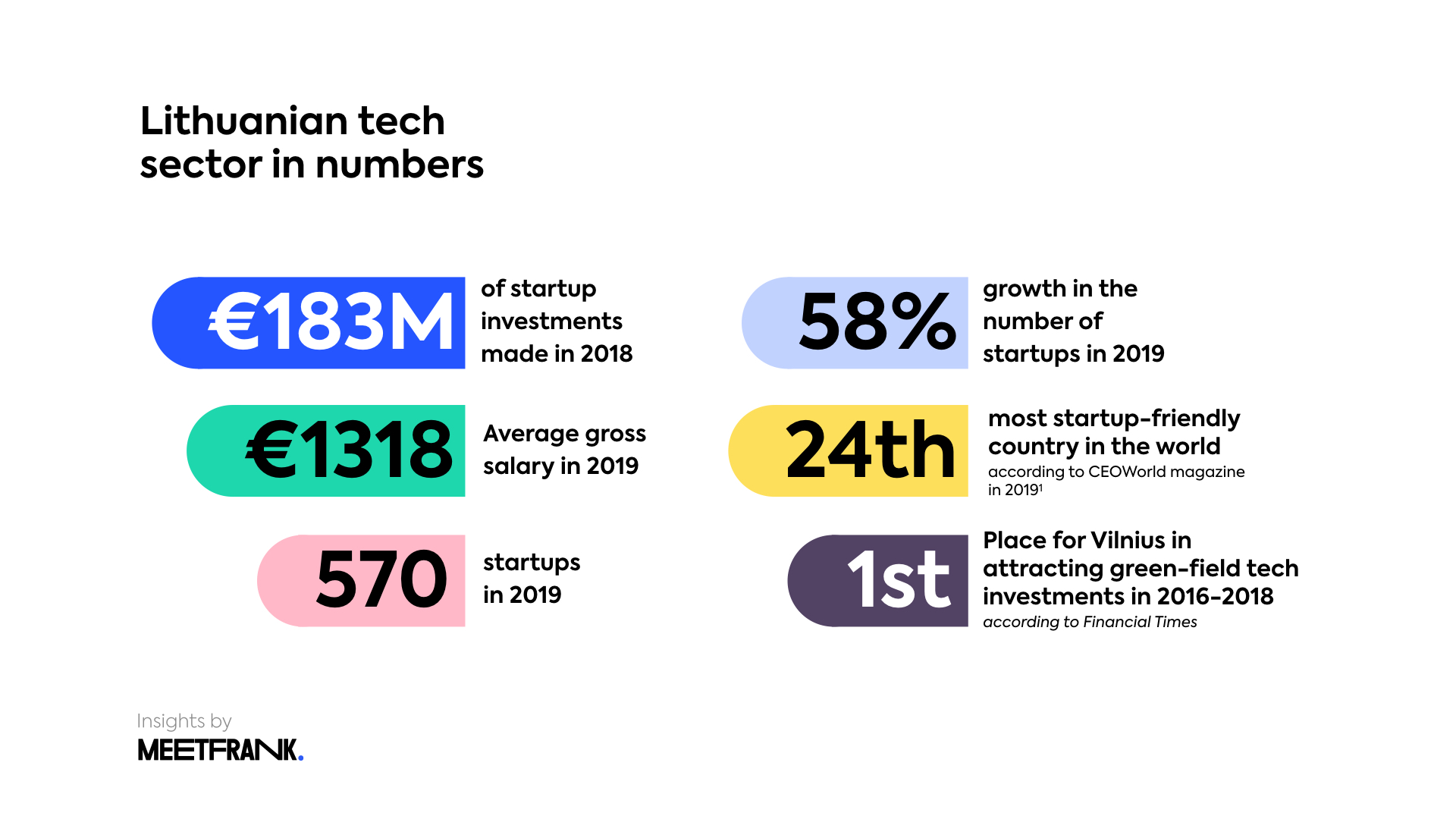 As Lithuania recently announced its own E-residency programme,  following in the footsteps of Estonia and just launched the Startup Employee Visa to attract highly qualified foreign talent, it would be an understatement that things are happening in the small Baltic country.

The capital city is home to the futuristic hub, co-working space and community center called Blockchain Center Vilnius (HL: https://bcgateway.eu/) and to the largest fintech conference in the Baltics FinTech Inn. In addition, Rise Vilnius, recently taken over from Barclay by Swedbank, and rebranded as Rockit has been vital in nurturing startups and fostering tech innovations in the country.

All of this has been attracting international and regional talent to Vilnius that just made the biggest leap in the world talent ranking, moving 8 positions upwards, placing 28th among 63 countries –  the highest among the three Baltic countries.

Currently, the Vilnius area is home to over 21 000 ICT sector and 6000 research & development employees, while the city is one of the youngest European capitals with more than 50% of residents younger than 40 years old.

Whom are employers looking for? 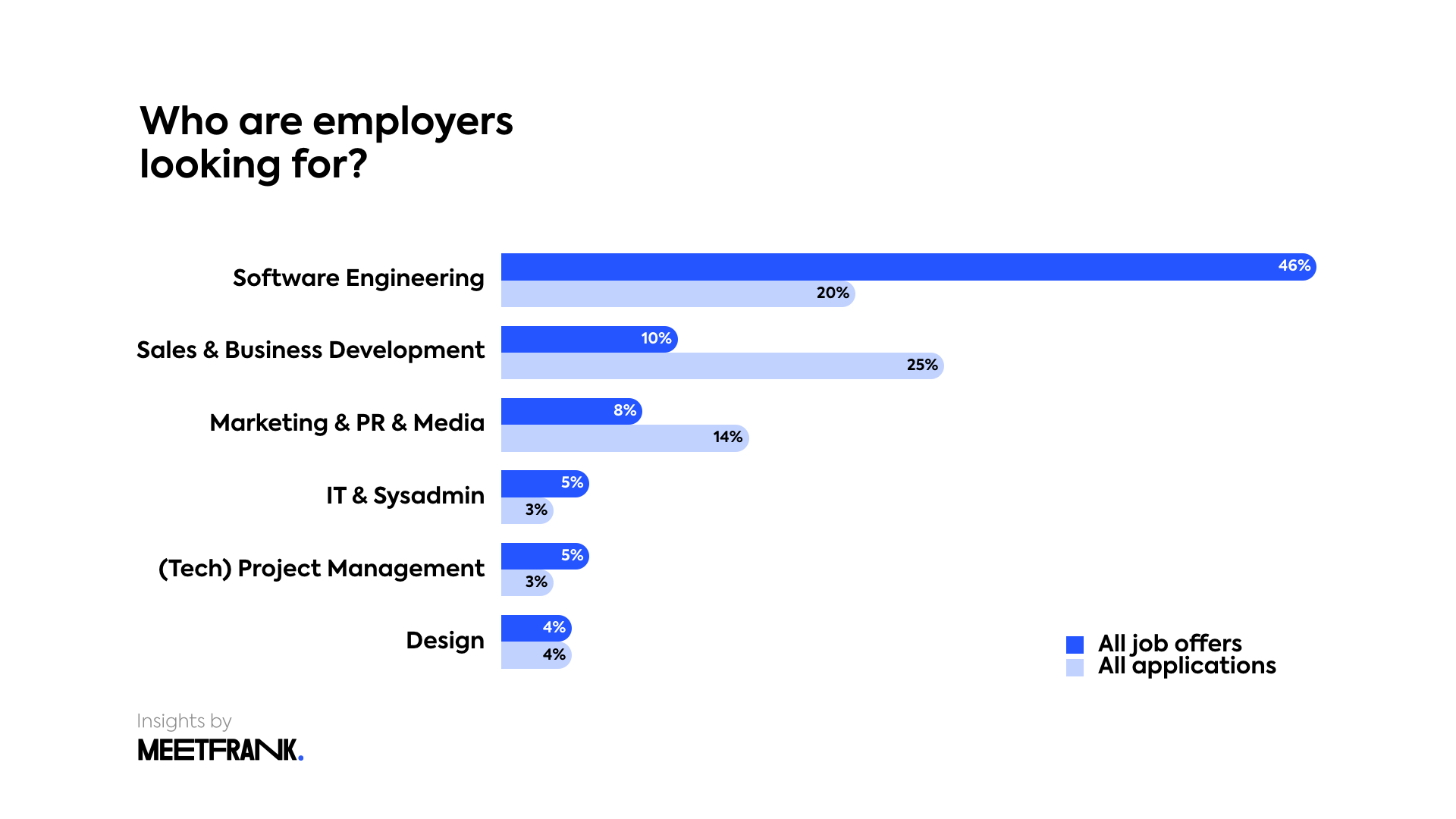 Similarly to the rest of the European job market, software engineers are among the most sought-after workers at the moment, with nearly half of all the job offers. However, only 20% of the applications are made for these jobs, marking a very low level of competition.

It is completely the opposite for sales and business development and marketing & PR, the second and third in terms of the number of job offers, as both have the % of applications per job offer that is considerably higher, thus meaning a higher level of competition. 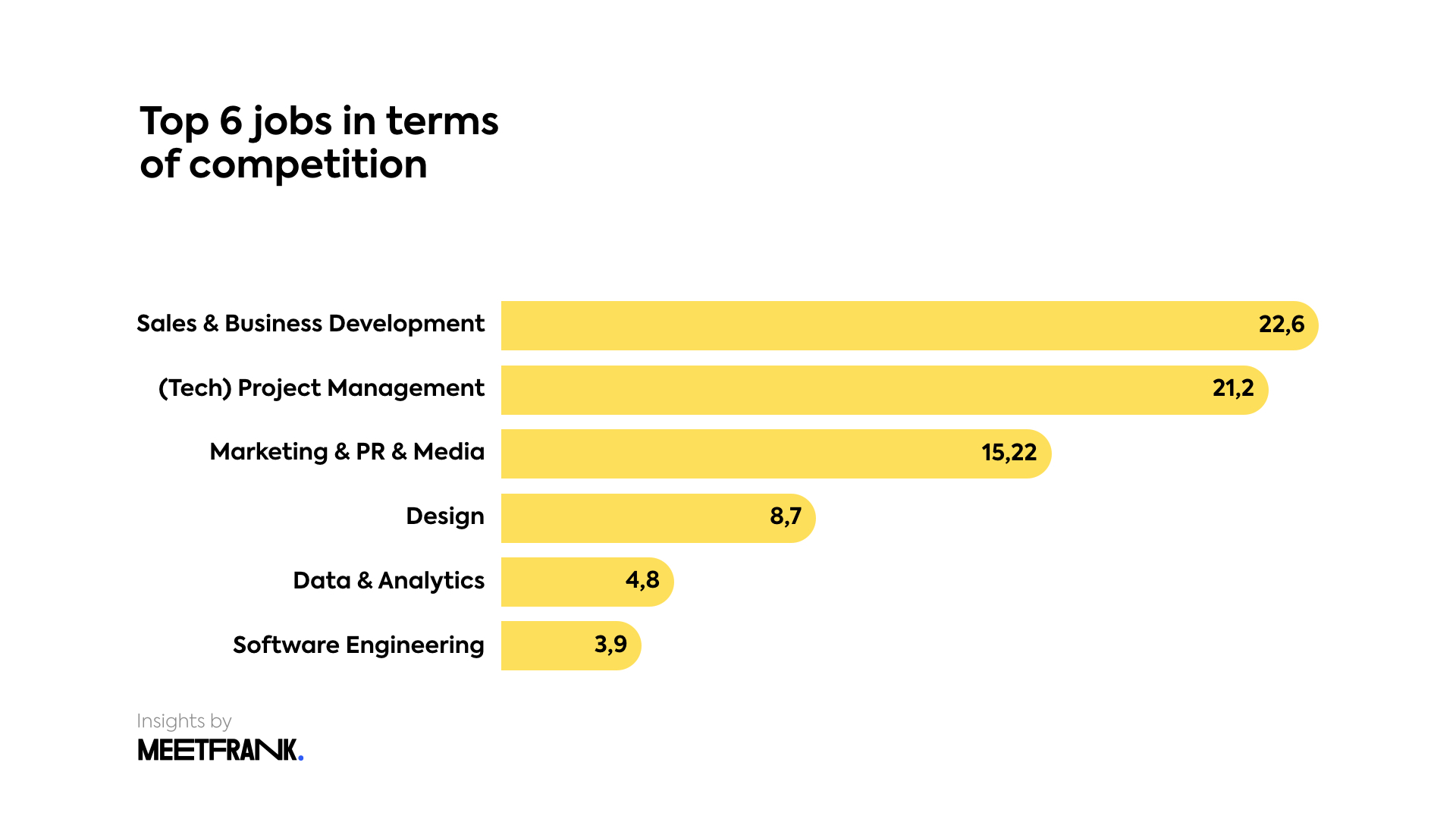 The competition for top tech jobs in Lithuania is way below the European average as the ratio of applications per offers is usually twice as little.  Sales & business development and (tech) project management are the most competitive with slightly over 20 candidates per job.

As with the rest of Europe, marketing & PR is also among the more competitive jobs, but the rate of competitiveness is still quite low – 15 applications in Lithuania vs 35 as the European average.

Software engineering, the job that is most in-demand and the most well-paid in Lithuania (as in the rest of Europe), is also the least competitive in Lithuania, with IT & system administration following close.

Salary offers for 6 most popular jobs 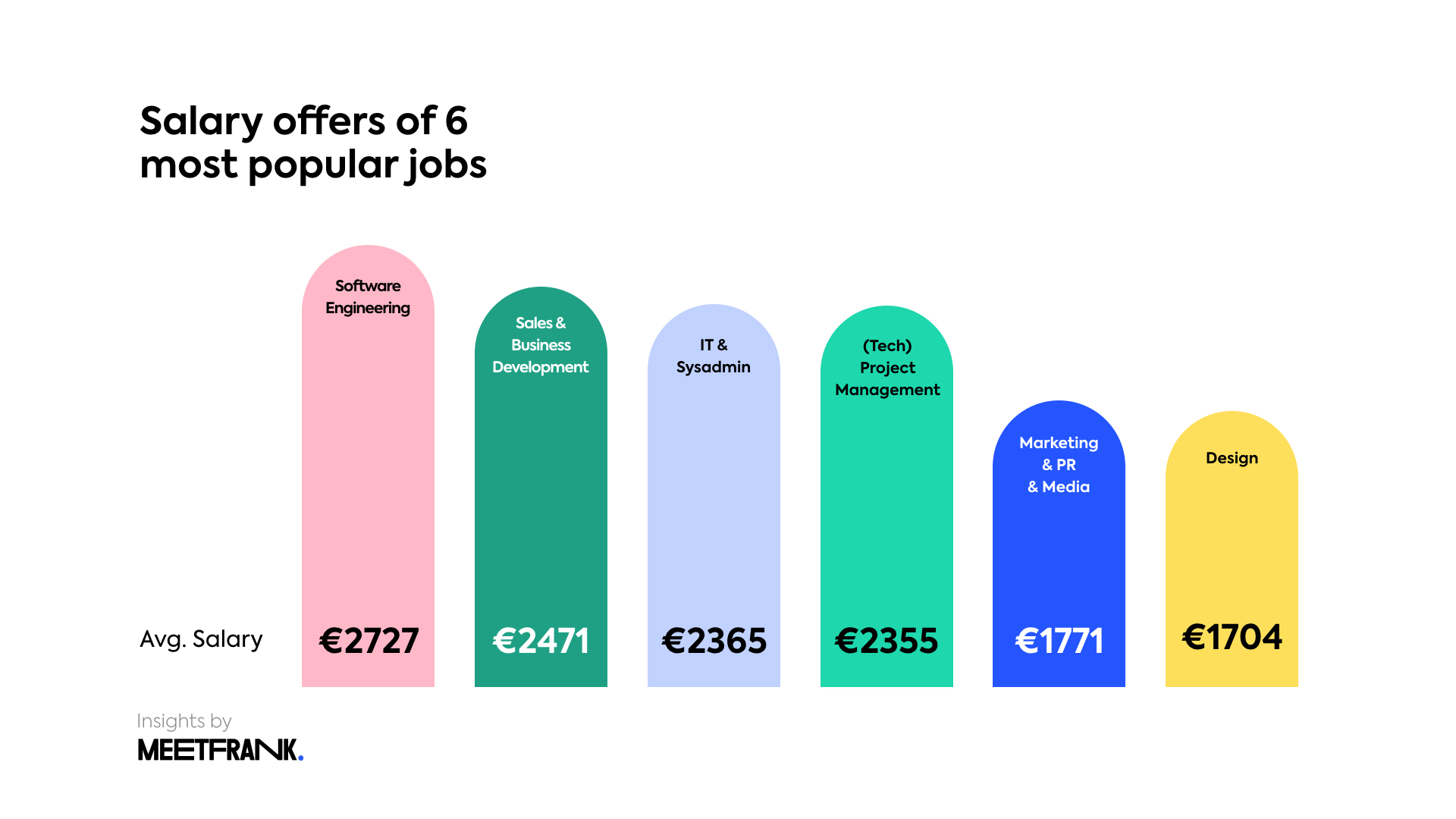 The average salaries in the Lithuanian tech sector are currently around 40% lower than in the EU on average, but so are the living expenses in Vilnius. Among the 6 most popular jobs, software engineering tops the list as in the rest of Europe, with an average payment offer of €2727 gross.

Jobs for sales & business development, IT & sysadmin and (tech) project management offer around €2400 gross with IT & sysadmin having the lowest pay gap with the rest of Europe – €2365 vs €2747 gross.

Creative fields – designers and marketing – are currently lowest-paid jobs here with an average salary offer around €1700 gross, but the gaps with the European average are not bigger than with tech jobs. 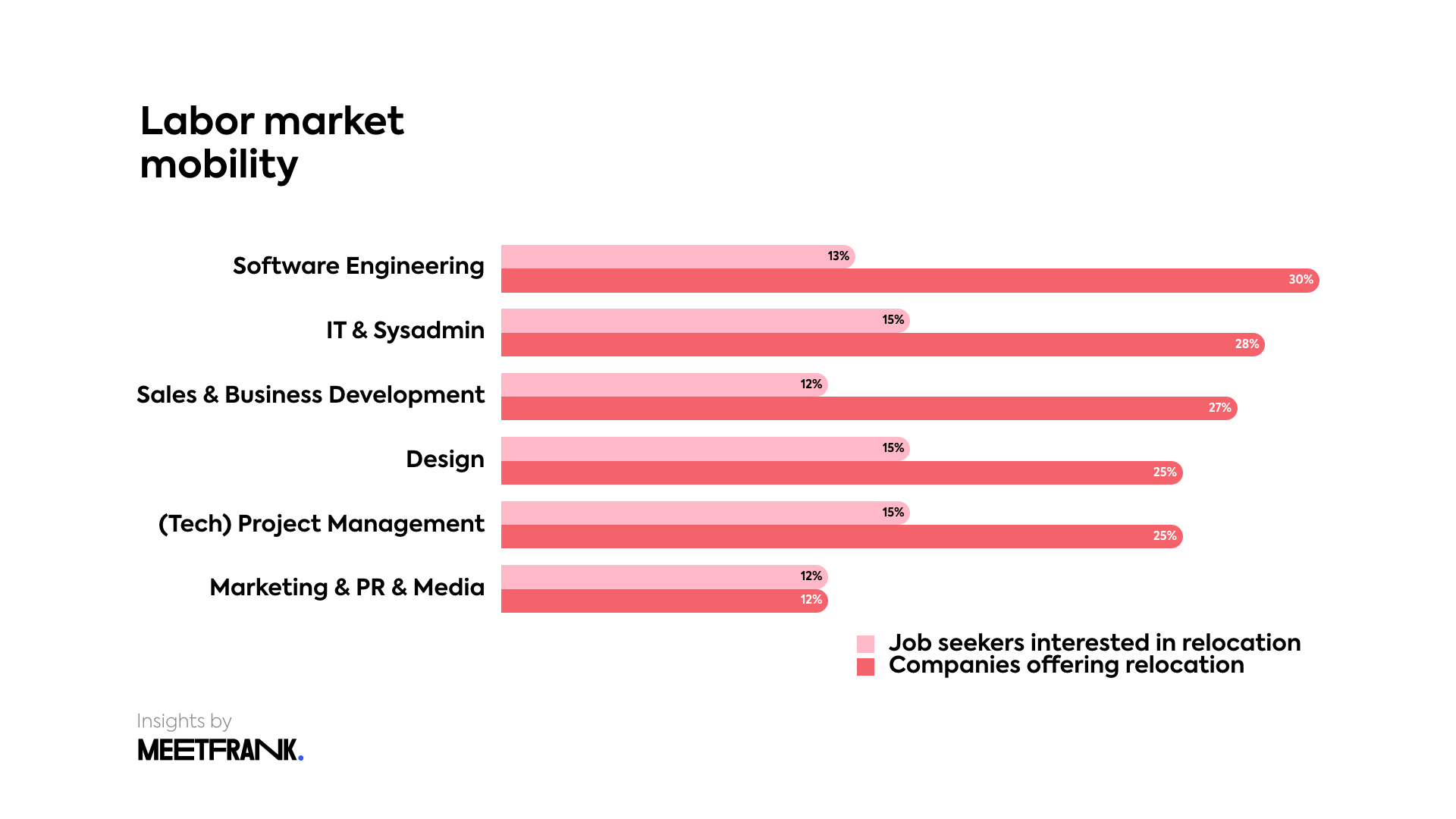 When it comes to relocation, the readiness of Lithuanian companies to offer relocation is almost twice as low as the EU average. For the offers of top 6 jobs, 25% offer relocation, whereas the same figure for EU average is 43. This is understandable, as the opportunities for the companies are more limited, however, all signs show that Lithuanian companies are in a growing need for tech talent from abroad, so recruiters should try to find the means to offer this option more.

It comes as no surprise that the most sought-after roles, such as software engineering and sales & business development, are the ones who offer relocation the most.

On the workers’ side, however, Lithuanians are slightly more eager to relocate as the % of users interested in relocation is 14% vs the 12% that is the EU average. Curiously enough, the differences between fields are almost non-existent, as all fall between 12% and 15%.

Top 6 countries with applications to relocate to work in Lithuania 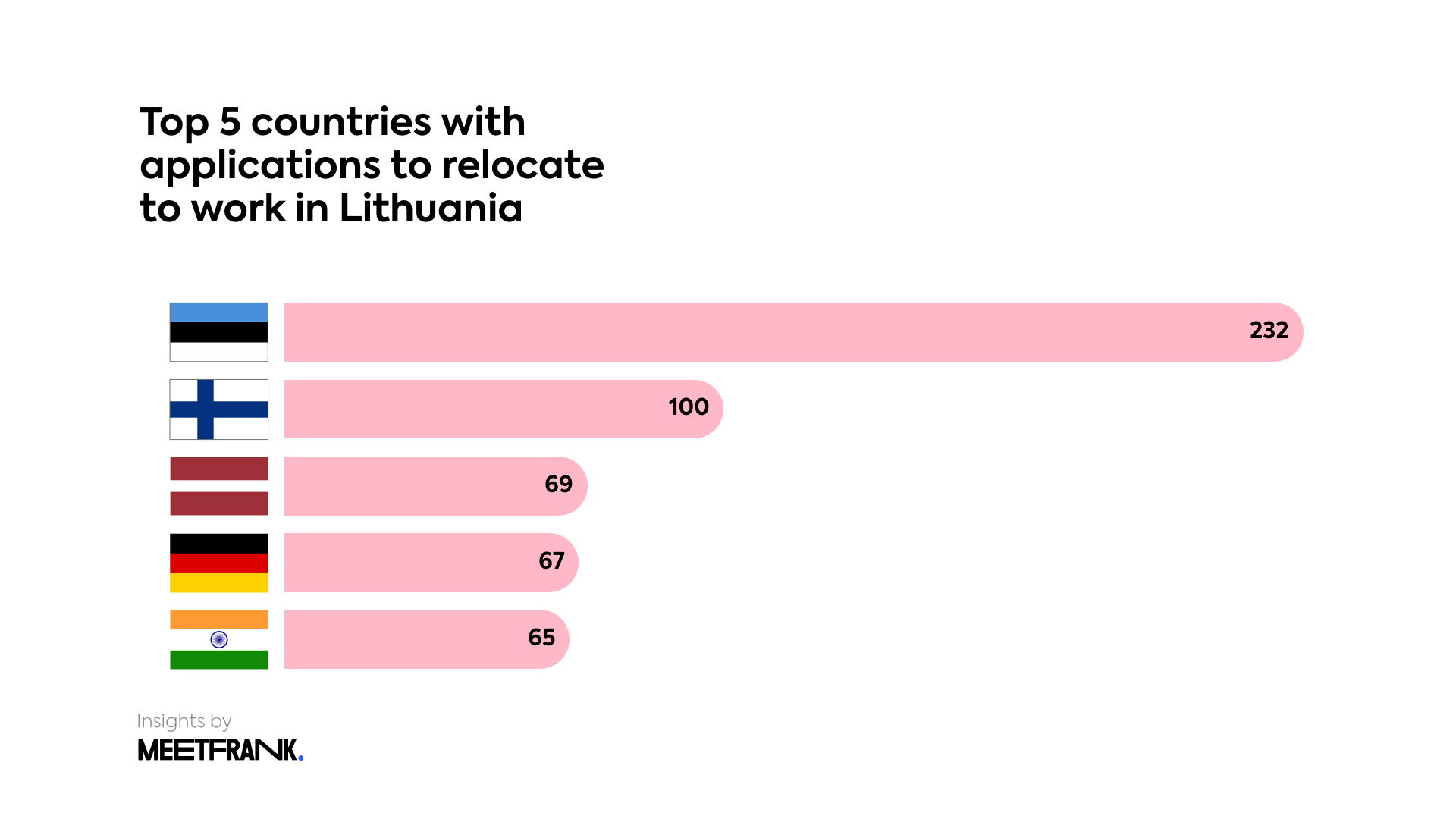 Whether it’s the weather or its blossoming tech scene, Lithuania is currently the most popular for northern countries as Estonia, Finland and Latvia are the top three countries with applications for Lithuanian tech jobs.

Curiously enough, India ranks 5th among the countries with interest, almost tied with that of Latvia and Germany – the holder or of the 4th place. 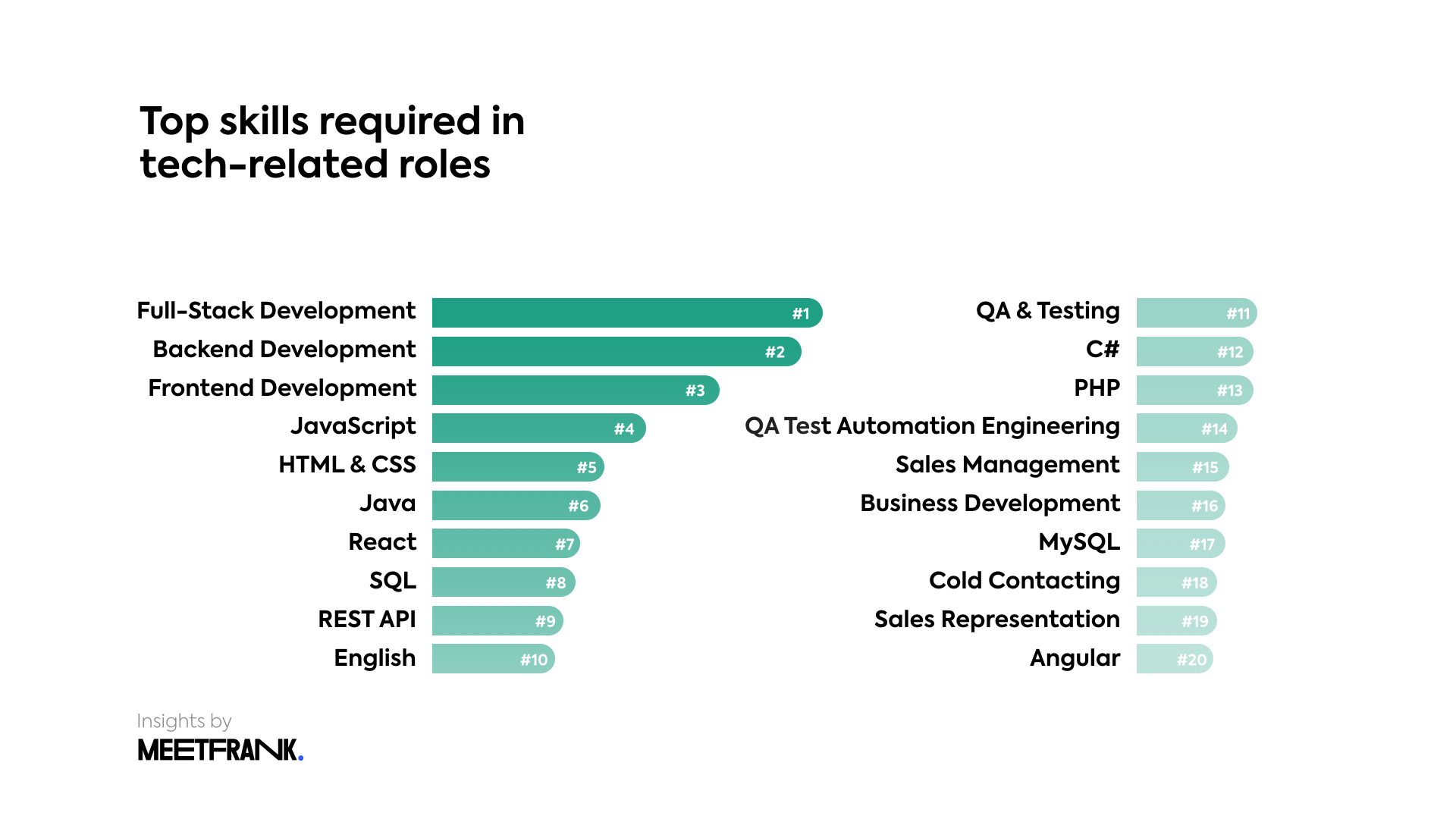 Currently, 15 of the 20 most sought-after skills at MeetFrank are those of software engineering, with full-stack, backend and frontend development making up the top 3. The most in-demand coding languages are currently JavaScript, HTML & CSS, React and SQL.

For sales & business development, Lithuanian companies have named English, sales management, business management, cold contacting and sales representation as the skills that they are expecting from the candidates the most, while Lithuanian language is also expected on some occasions.

Marketing & PR experts need to have good skills in content and product marketing and market strategizing.

System administration, DevOps and computer user support were the top 3 skills required from IT & sysadmin candidates.

The hottest employers in Lithuania 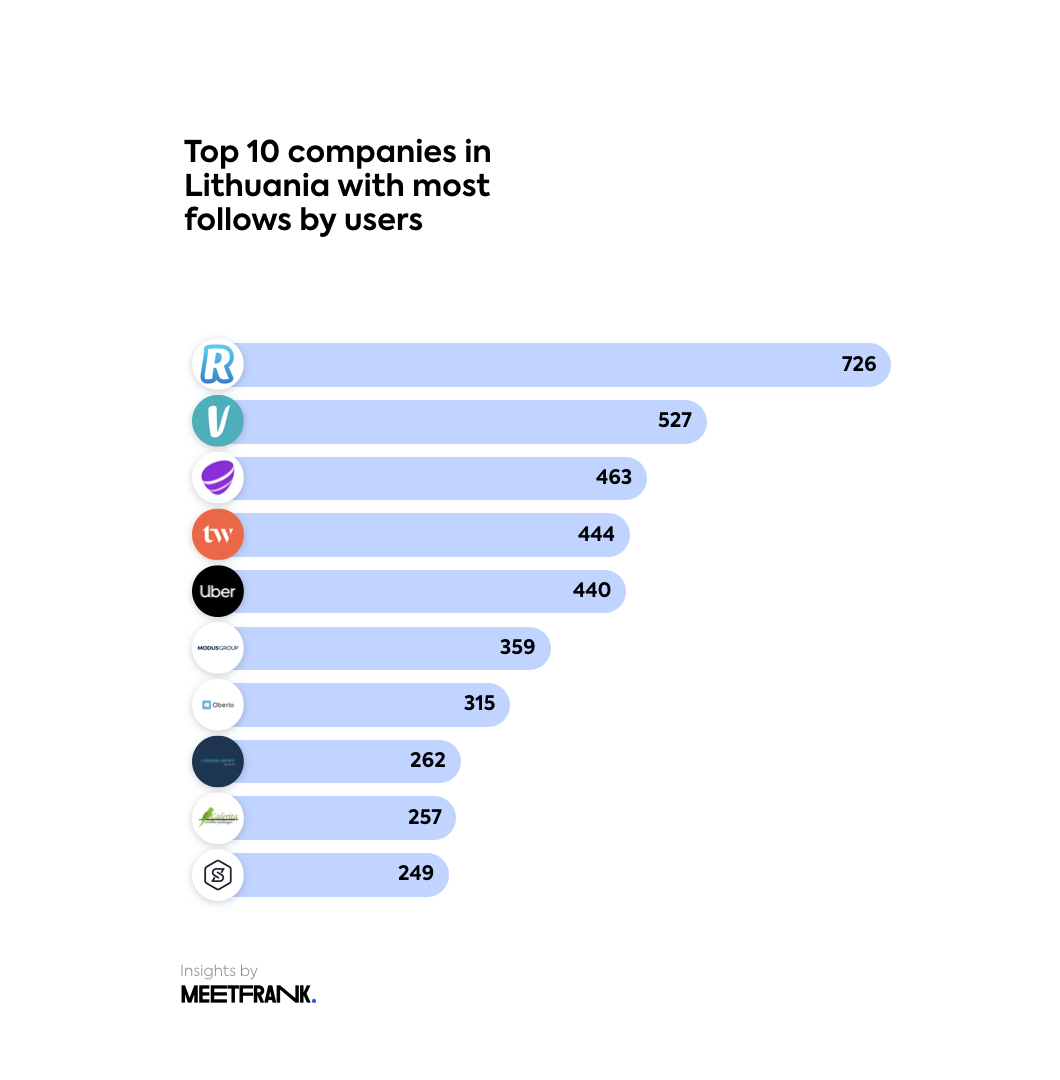 Based on MeetFrank data, the hottest job providers in Lithuania are the UK’s first digital banking unicorn Revolut and the first local unicorn Vinted – a digital marketplace for second-hand clothing.

Telia, one of Scandinavia’s biggest telcos that also operates in the Baltics, is on the third spot, with Treatwell, an online spa & salon booking platform and the ride-hailing giant Uber following closeby.

Other local companies at the top are the conglomerate Modus Group, active in the construction of renewable energy and the car-sharing sector (Citybee), e-commerce assistant Oberlo, the state-run airport operator Lithuanian Airports, translation agency MB Galerita and the digital product development agency Telesoftas.

Lithuania and its capital Vilnius are an exciting option for jobs or business activities to keep an eye on, as the country is hungry for international tech talent and has established itself firmly as a regional hub for fintech enterprise.

Although the average salary offers in Lithuania are still behind the European average as with the rest of Baltic countries, the low cost of living and the vibrant, startup-friendly atmosphere in the capital city Vilnius more than make up for it.

Looking for more? Here are the tech sector job market overviews for Europe and Estonia.