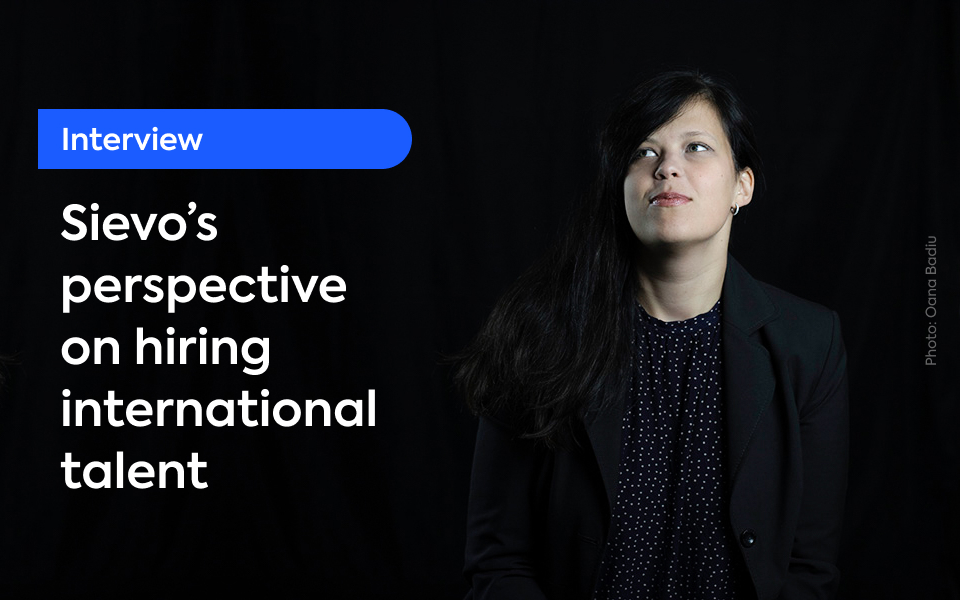 Founded in 2003, Sievo is a global leader in procurement analytics. The company now manages over 350 billion euros in spendings yearly. They have also succeeded in building an incredibly diverse organisation with people from over 30 different countries working in their Finnish and USA offices.

To find out how they did it, we interviewed Janina Kurki, Head of Nerd Attraction & People Development Partner at Sievo. In the interview, we talk about challenges that recruiting internationally presents, finding the best talent from abroad, and tips to the companies planning to start hiring globally.

In addition to the company’s take on the matter, we also asked some questions from Sievo’s employee Aleksandr Shevelev. The Senior Software Engineer is originally from Russia, but in 2019 decided to move to Finland to work at Sievo. How was his relocation experience and how smoothly did he settle in? Let’s jump into the interview to find out!

When Sievo was founded in 2003, the founders Matti Sillanpää and Sammeli Sammalkorpi built a procurement solution to help big companies globally. Our first client was a Danish company LEGO, and already the third hire was a non-Finnish speaking specialist. So our focus is not on hiring internationally, but on always having the best talent.

“Our focus is not on hiring internationally, but on always having the best talent.” 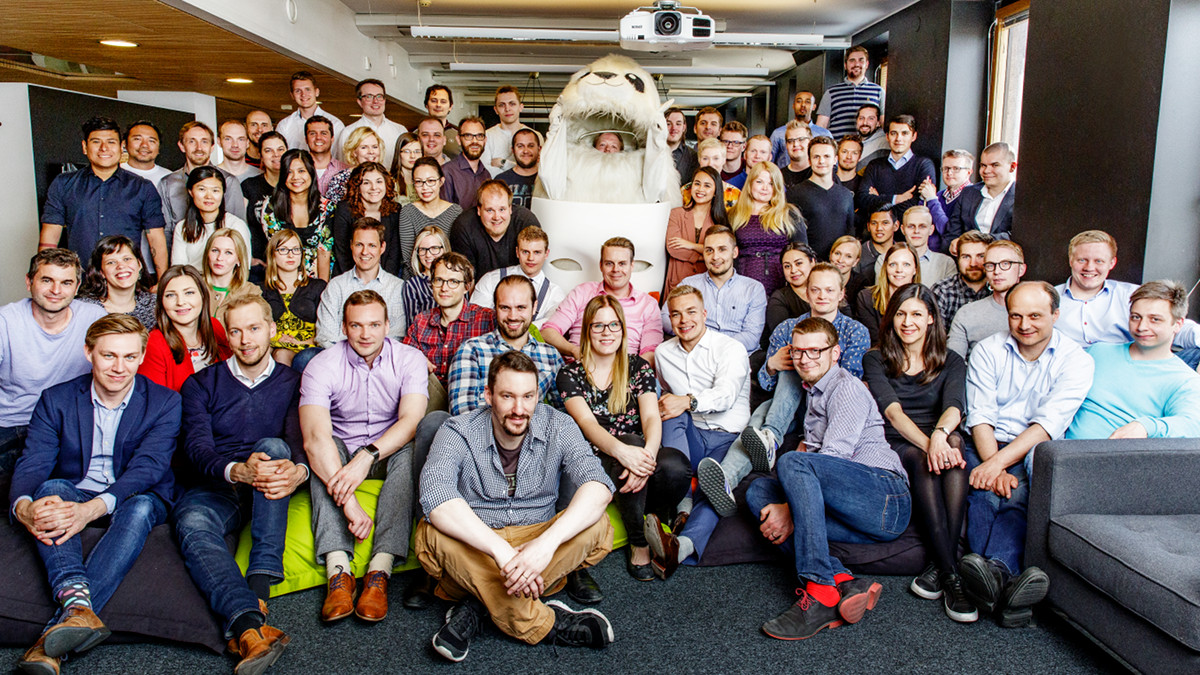 What are some of the greatest mistakes Sievo has made on this journey of hiring and relocating foreigners? Maybe you could share a specific story?

Hiring international people requires that the company has a working culture that fits for people from different backgrounds. I think Sievo has been exceptionally successful in that, but it might have made us assume it would be an easy thing to do and that relocated people would fit in Finland organically.

There has not been a crisis that I could think of, but it helps if things are well prepared in advance. There have been surprises on how many daily activities in Finland rely on e-bank credentials. Also, the taxation might hit hard when you see your first payslip. There cannot ever be too much information shared beforehand, and we should share even more information about the local ways of working. When you have a relationship of trust with people going through relocation, they will also trust your advice on managing the Migration Bureaucracy Jungle.

Aleksandr: Between companies, there are quite a lot of differences in management and working style. I am glad to say that Sievo’s values were quite helpful in making the transition between companies and countries. I was extremely happy to see that within Sievo I get a lot of opportunities to grow, which was one of my concerns during the relocation process.

How does Sievo find the best talent from abroad to relocate in the first place?

We do use different channels to promote ourselves; LinkedIn, Glassdoor, Meetfrank, etc. We take part in meet-ups and events, and our developers have good networks where they promote their work and teams. We have always been able to attract international talent, so it has helped a lot when we have much more diverse candidate pool potential.

We do not settle for the basic ways, instead, we are always looking for new ways and channels, e.g. we were also one of the first companies in Finland using Meetfrank too.

Aleksandr: When I started looking for a job in Finland, I visited a job fair organized by Helsinki Business Hub in the Consulate General of Finland in Saint Petersburg. At the event, I had the first interview round with Sievo and some other companies. A couple of rounds of interviews later I chose to accept Sievo’s offer. 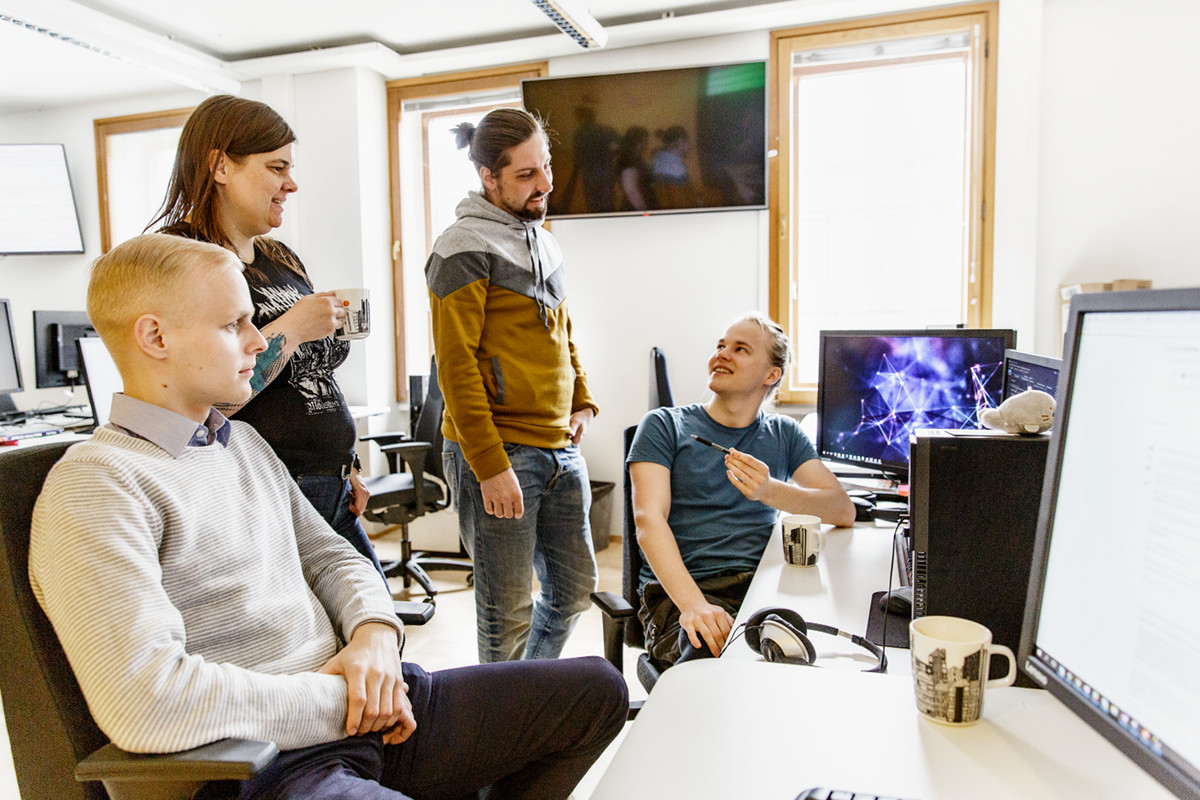 How much do you have to convince people to choose Finland as a place to work? What are the country’s main attractions for potential employees, a wage level, culture or something else?

Actually, mentioning Finland makes it easier. Mainly people are worried about the climate, location and taxation. However, people are usually pretty positively stunned, after sharing the tips about surviving the cold and darkness, and what great things the high taxation rate brings (safety, clean environment, free schooling and health care). Also, the current situation with Covid-19 is just a concrete example of how well things work in Finland.

Sometimes it seems that Finland is the best-kept secret for IT professionals. It would help if Finland would be promoted as one of the best countries for developers as it is confirmed already by the latest research.

“Sometimes it seems that Finland is the best-kept secret for IT professionals.”

Aleksandr: I started to look for a job abroad due to general political, social, and economic problems in Russia. Finland became my first choice because of several factors, including being a well-managed country and its closeness to Russia. It is relatively easy to get to Saint-Petersburg via train without long queues at customs (if there wasn’t a raging pandemic).

What are the biggest challenges for foreigners while relocating to Finland based on your experience?

You cannot get things done without e-bank credentials and to have them, it takes multiple visits and a lot of bureaucracy. Also, getting rental accommodation as a foreigner (without bank credentials) takes longer than it should. Sievo provides accommodation to get started and helps with recommendations, references and even sets-up appointments with the long term renters, but it still might be time-consuming to get things sorted.

The Finnish bureaucracy has its ways, and it definitely might cause issues at some point. But we promise every new team-member assistance with any matters because moving to a new country is quite stressful already by itself.

Aleksandr: The main problem was the thinning or breaking of almost all the social and personal network connections. From the technical or bureaucratic standpoint relocation with Sievo’s support was quite a smooth process. There were some delays in getting the Finnish ID Card and renting a place to live, but it was mostly due to my inexperience with the local market.

When looking back, there were several means of support provided by Sievo: 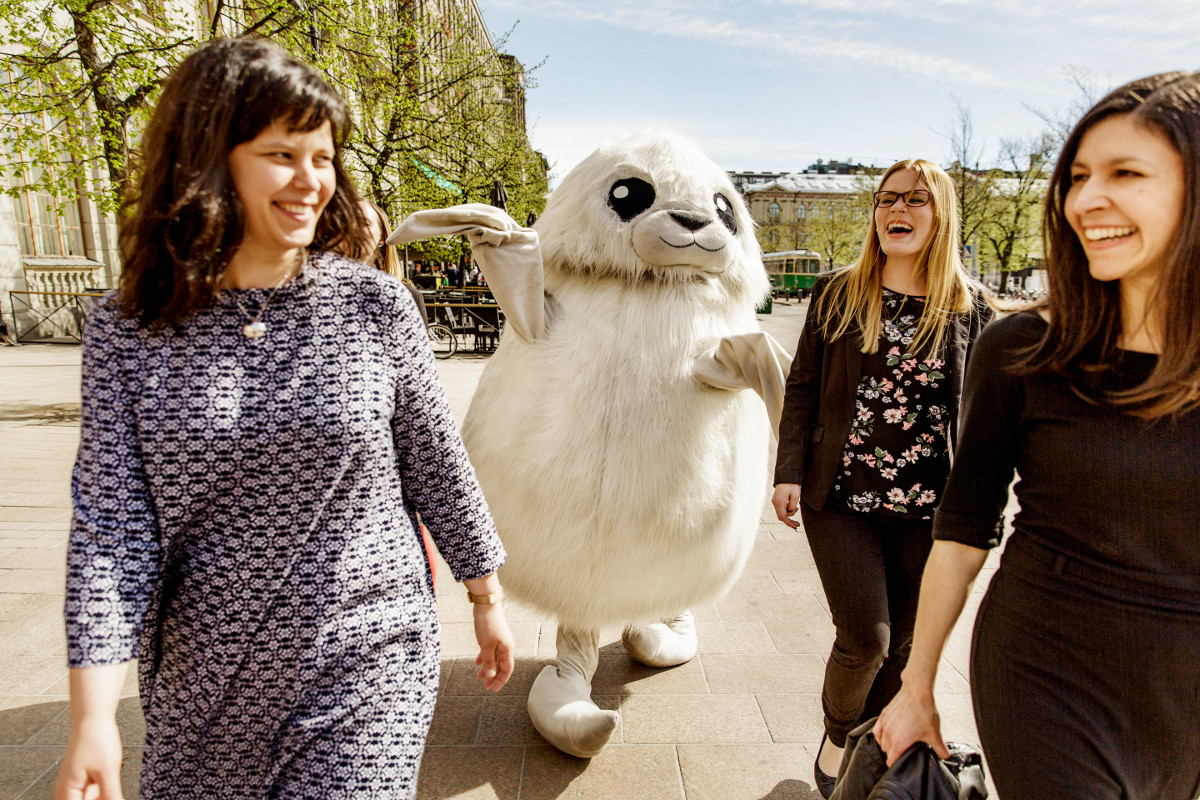 Currently, European countries have closed their borders already for a second time this year, which makes relocation more challenging. On the other hand, people are working remotely more than ever. How has this year changed your views on recruiting?

As we have always recruited internationally, the remote tools have been used for years already. We are also very fortunate in a way because businesswise it is one of the best years in Sievo’s history – and we are recruiting probably more than ever. It has shown me that we have been able to recruit people that have a high tolerance for change and uncertainty.

I have not felt the need to make huge adjustments on our side, but candidate behaviour has changed. People think thoroughly if now is a good time to change jobs, so they check information about the company very carefully, including the financial data.

“People think thoroughly if now is a good time to change jobs.”

From a growth company point of view: we have been able to bring people stability in very unstable situation and been agile to adjust with the ‘new reality’ while enabling Sievo’s hockey stick growth.

How do you see the impact long-term? Are people likely to look for new challenges internationally?

International migration has already started. It is not just Covid-19 that makes people search for brighter futures. Climate change, political uncertainty and even warfare will make people leave their current homes. I personally hope we can globally make an impact for a better future for all, so migration wouldn’t be the only way to provide safety and prosperity to everyone.

Let’s look at the bigger picture for a moment. Hiring international talent to Finnish companies has been a hot topic over the summer. Why do you think the issue has gained so much attention this year?

I have been very surprised about the fact indeed, but it is definitely a good discussion and an important topic. I have been talking about the issue since 2017, but it hasn’t raised that big headlines until now. I believe the increasing need for talent and the shortage of experienced professionals are finally coming to a critical state where IT companies in Finland need to become more accepting of international talent.

When it becomes a business-critical issue, the change will happen. I believe it is inevitable. The difficult question is how well the companies can make that change – changing your work language and company culture is not a recruitment decision, it is a strategic decision to the core. And that takes time.

What would you suggest to companies that are only now making their first steps to attract talent from different backgrounds?

Before anything, I would recommend companies to think about why they are making the transition, what it means to them and what are the objectives. Also, the team has to be involved in the process as early as possible.

There are some cruel rumours about “international companies” where a couple of international developers are kept in a separate room “so they would have someone to talk to” as in the cafeteria the only spoken language is Finnish. Or similar cases where the official slide decks are in English, but the rest of the documentation is in Finnish.

In these kinds of cases, I would recommend the company to re-evaluate whether they are ready for international talents, and how they can help with the integration to the team. There are lot of companies that have done it already, the knowledge and information is available, it never hurts to ask help to have a better starting point for the change. 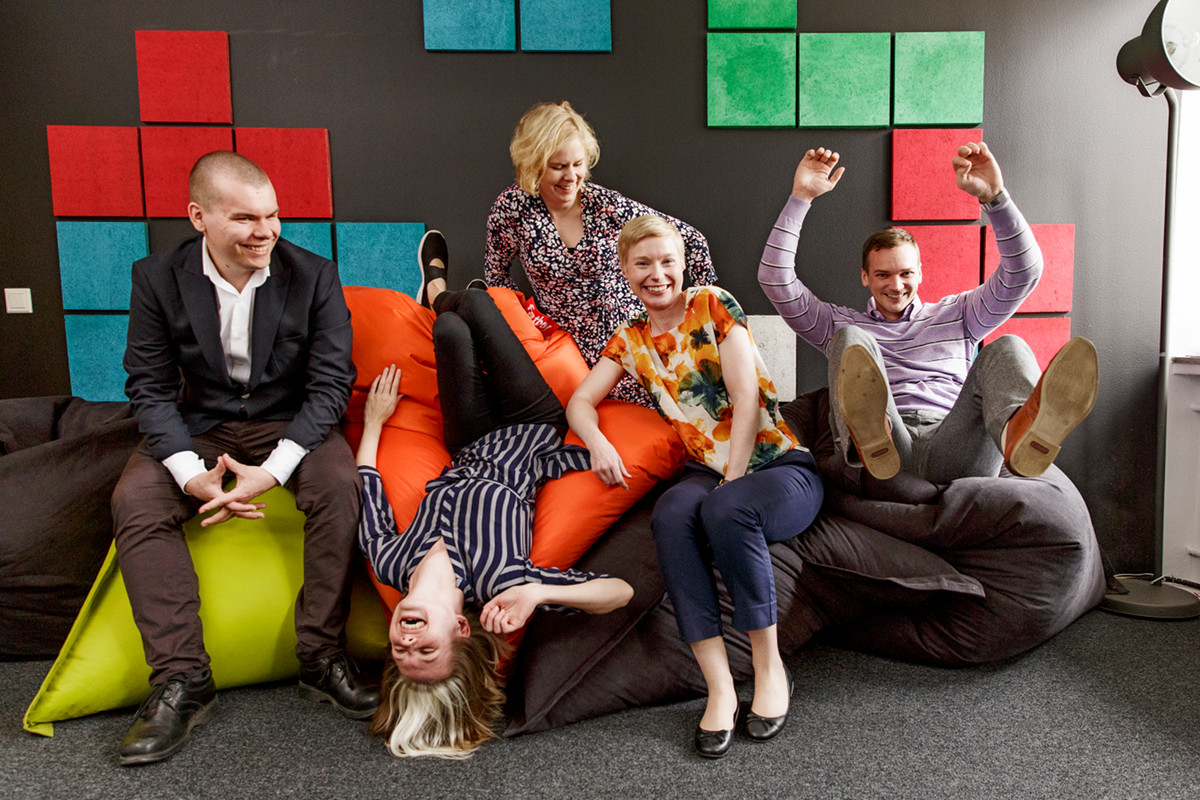