A Guide to HR Jobs in Finland: Data You Need to Know 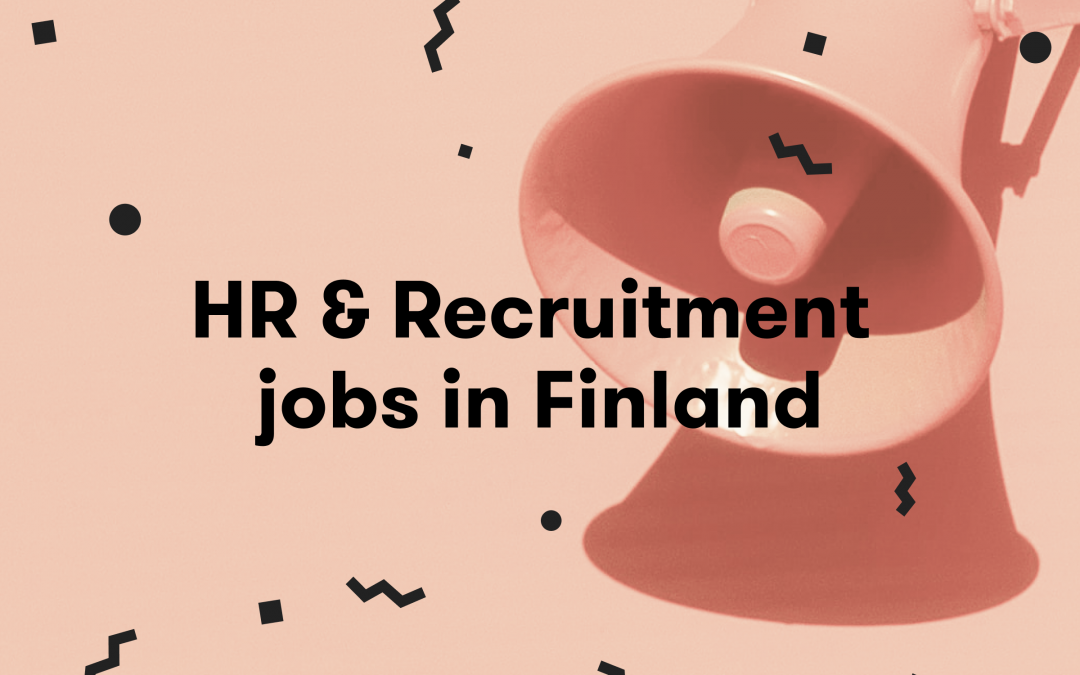 A country where you can sit in a glass igloo and watch the aurora borealis almost all year round, Finland can often seem like a dream. It has beautiful scenery, and with a population of slightly over 5 million, is the most sparsely populated country in the world.

If you have always wanted to find work in Finland, you just may be coming in at the best time ever. Due to the country’s contracting labor market, more jobs will become available.

So, if you have had your eye on some HR jobs in Finland, you want to read through this article so you know what to expect.

What does the job market in Finland look like? 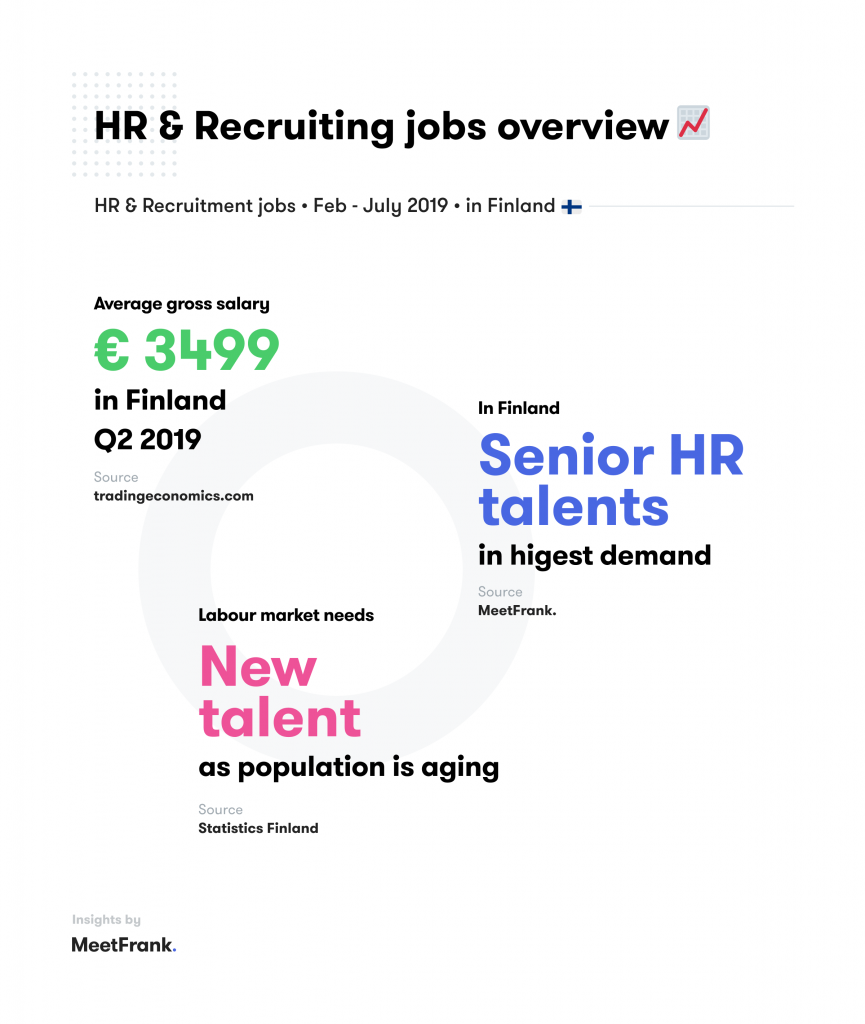 Finland has one of the best performing economies in the EU. Its highly industrialised economy had a GDP $244.9 billion in 2017, with a per capita GDP of $44,500. Its per capita figures were almost as high as those of Austria and the Netherlands, and slightly higher than Germany.

These figures underscore the high standard of living in the country and the quality of opportunities open to its inhabitants.

Although the economy grew at a steady rate prior to 2009, it contracted slightly between 2012 and 2014. This recession affected the government’s spending power and the country’s debt ratio. It recovered in 2016 though and is expected to maintain a 1.5% growth rate in 2019.

It’s a different story for the Finnish labor market however. Finland has been struggling with a rapidly ageing population for a while now. It is expected that in 15 years’ time, Finland’s population will look like Japan’s today.

The country’s working population is steadily ageing, and by 2070, those aged over 65 will be about 1/3 of the population. This will strain the country’s earning capacity and increase its expenditure at the same time. More money will have to be spent on social security plans for the newly aged members of the population.

The Finnish government is looking to make the country more attractive to immigrant talent in hopes of bridging the steady loss of its working population. Against this backdrop, we can better appreciate the 2019 statistics on HR jobs in Finland culled from MeetFrank’s app.

What positions are in demand for HR jobs in Finland?

The interesting thing about our data on HR jobs in Finland is their direct relevance to Finland’s current labor market troubles. HR personnel are generally tasked with helping companies maintain the positive image they need to attract talent.

They are often charged with recruiting, screening, interviewing and placing workers. They are also key to employee relations, payroll, benefits and training. You would expect that companies looking to ride out the troubles posed by the dwindling working population will want their HR on its “A-game”. 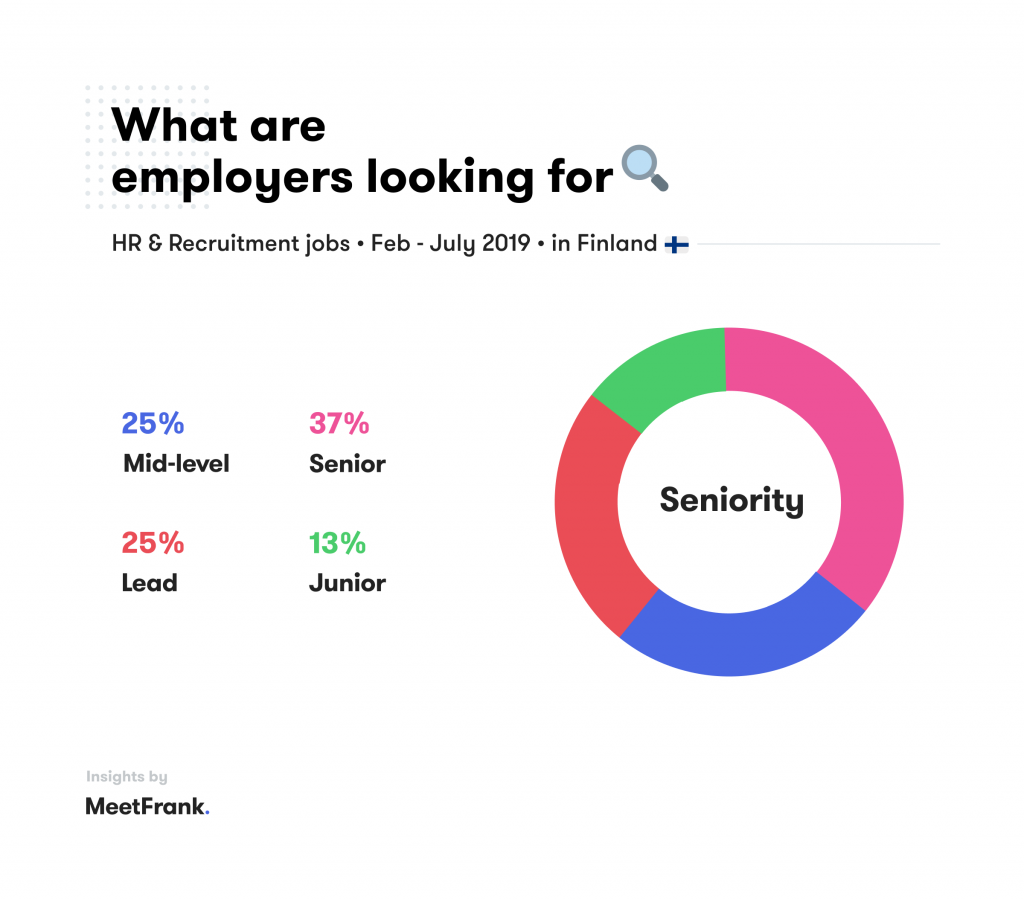 Perhaps this also explains our data on what talents are being sourced for HR jobs in Finland. Senior recruiters are currently in highest demand, as per MeetFrank data on jobs offers within the first 6 months of 2019.

Offers for mid-level and lead recruiters followed in close second while offers for junior recruiters were least.

The data does indicate that companies want to build out their HR teams from the middle up. Rather than adopt a top-heavy or bottom-heavy approach, the data shows that firms want more balanced teams with a good mix of talents.

There has been a general upward trend for salaries in Finland recently. In the second quarter of 2016, average gross per month in Finland was €3,380. This was the 7th highest in the EU at the time.

That figure has however steadily risen through the period. Gross average hit an all-time high of €3,534 in the second quarter of 2019, from €3,499 in the first quarter. 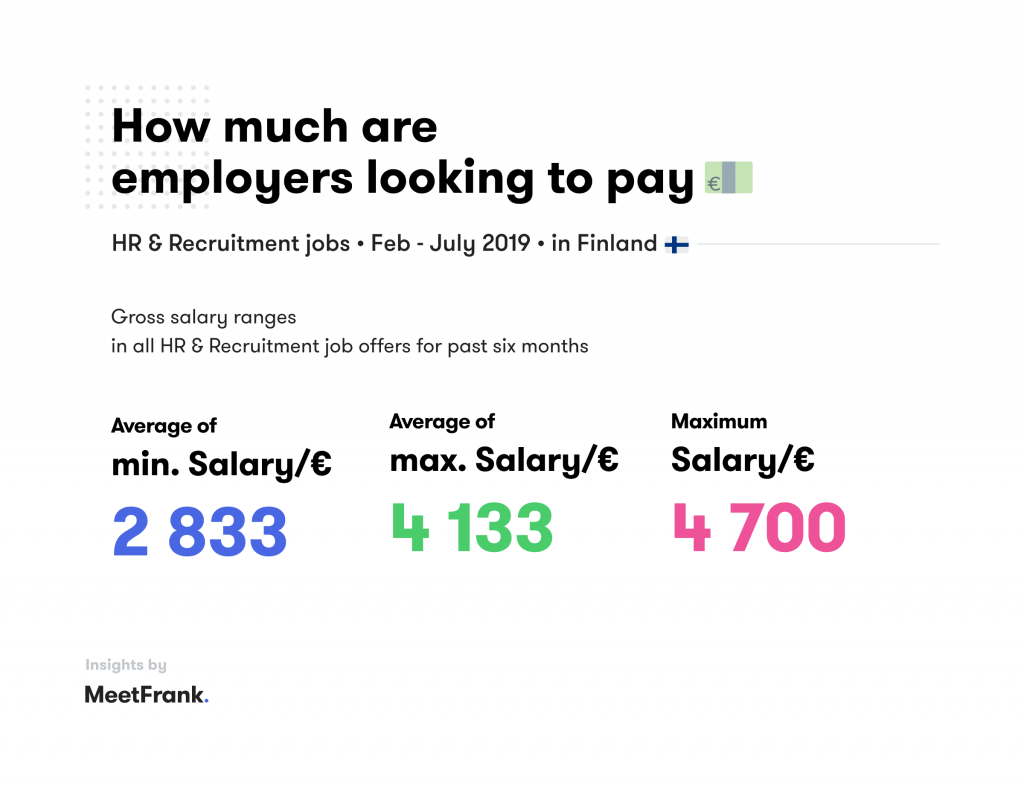 On the MeetFrank app, the average minimum salary offered for HR jobs in Finland was €2,833 while the maximum was €4,133. The figures confirm the national average, falling within the same threshold.

The total maximum amount offered during the period was €4,700. You’ll probably agree that much will be required of anyone that takes home this paycheck. That makes sense too, when you consider our data on the top 5 in demand skills for HR jobs in Finland and the combination of skills required to earn a salary in that range.

The job description of HR officers covers a wide range of tasks. Although the general workload may be broken down and distributed amongst several departments in big companies, that’s not always the case.

For startups that cannot afford to spread too many functions, HR personnel will need to come highly skilled and versatile. 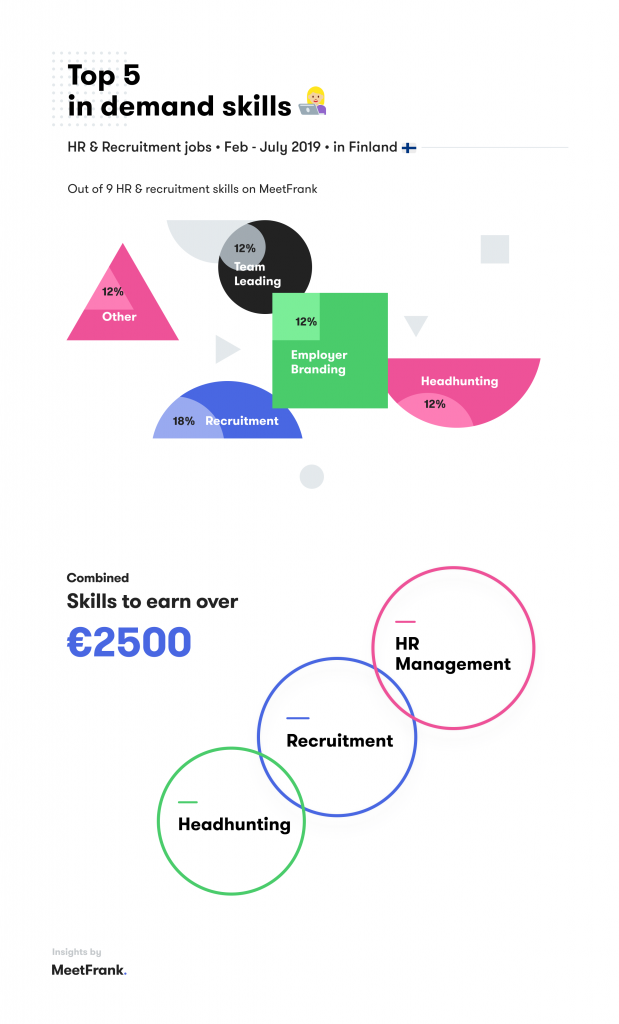 According to our data, out of 9 skills, companies are most interested in hiring candidates that have strong recruitment competencies. At 18%, that’s where the focus of most companies is on and quite frankly, we can understand them. No one wants to be caught in the squeeze of the contracting labor market.

The other skills also reflect this, although there is a more even spread in the requirements. Companies are also interested in candidates that have employer branding and headhunting related skills. Along with team leading and other skills, each of these constitute 12% of the requirements in job offers on MeetFrank.

How skilled do you need to be to command a salary well north of €2,500? Very skilled, if our data is anything to go by.

To earn a salary over that amount, candidates need to be competent in recruitment, HR management and headhunting. That pretty much describes an HR team lead or at least, a senior officer.

The three top companies that have been most active in the HR recruitment landscape are Sector Alarm Oy, Teamit Group Oy and Transval Henkilöstöpalvelut Oy. Here’s a bit on each of these companies. 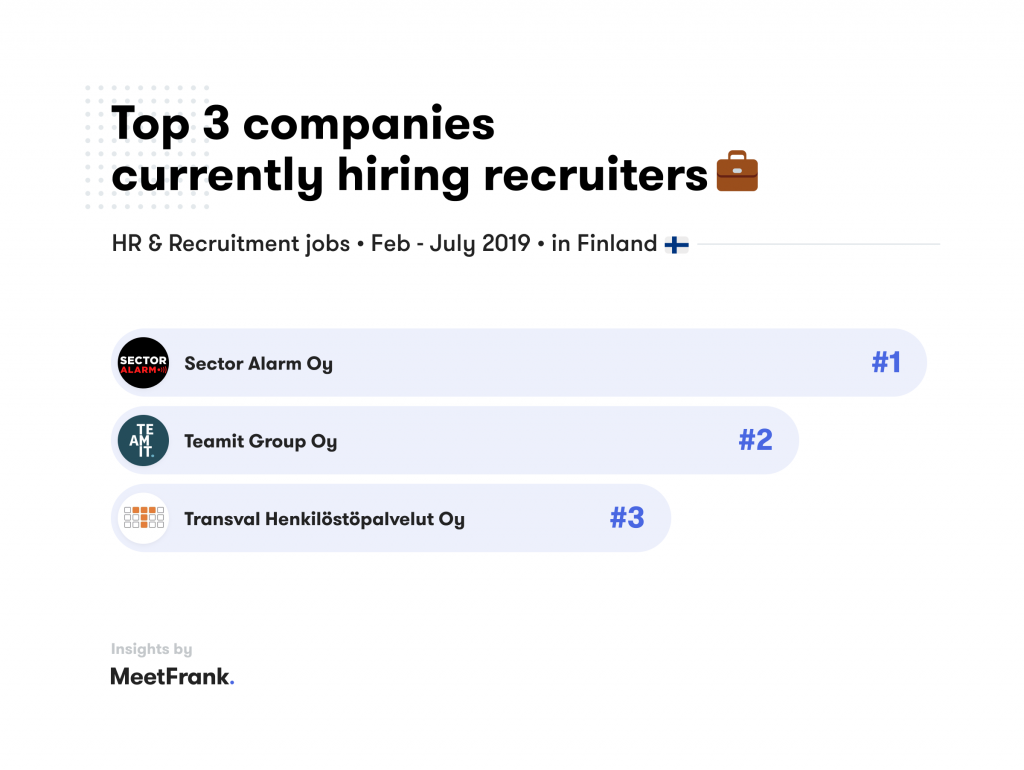 Sector Alarm Oy is the second largest operator in the European home security sector. It has over 2,000 employees in Europe and boasts a customer base of over 530,000 customers across Europe. The company has been around for 25 years and provides the prospect of stable, secure employment.

Teamit Group Oy is an IT company based in Helsinki. It is a software consulting and product house that specialises in developing IT solutions for a varied range of clients. The company markets itself as an equal opportunities employer with a turnover of over €2.3 million in 2018. Considering that it was only established in 2013, that’s a healthy growth rate.

Transval Henkilöstöpalvelut Oy is based in Vantaa, Finland. The company is an internal logistics giant, with services covering the five core areas of industrial, warehousing, terminal, consulting, human resources and retail services.

Use MeetFrank to find your perfect job solution

MeetFrank is an app that makes talent hunting and job search easy as breathing. As a talent driven marketplace with over 250,000 users, MeetFrank provides both employers and candidates with all the juicy stats that drive employment.

Recruiters can use the platform to incredibly simplify the task of sourcing and recruiting talent. The platform removes the need to expend sparse resources on developing in-house recruitment solutions by providing the same services in a cost-efficient package. Book a demo call here to see how it can help your company recruit better.

The platform is driven by individual talent though. That’s why MeetFrank is made for you, the talent, first. To find the best HR jobs in Finland, and pretty much any job you’re after, download the app here for free.