IT Jobs in Finland: Skilling-Up for Jobs of the Future 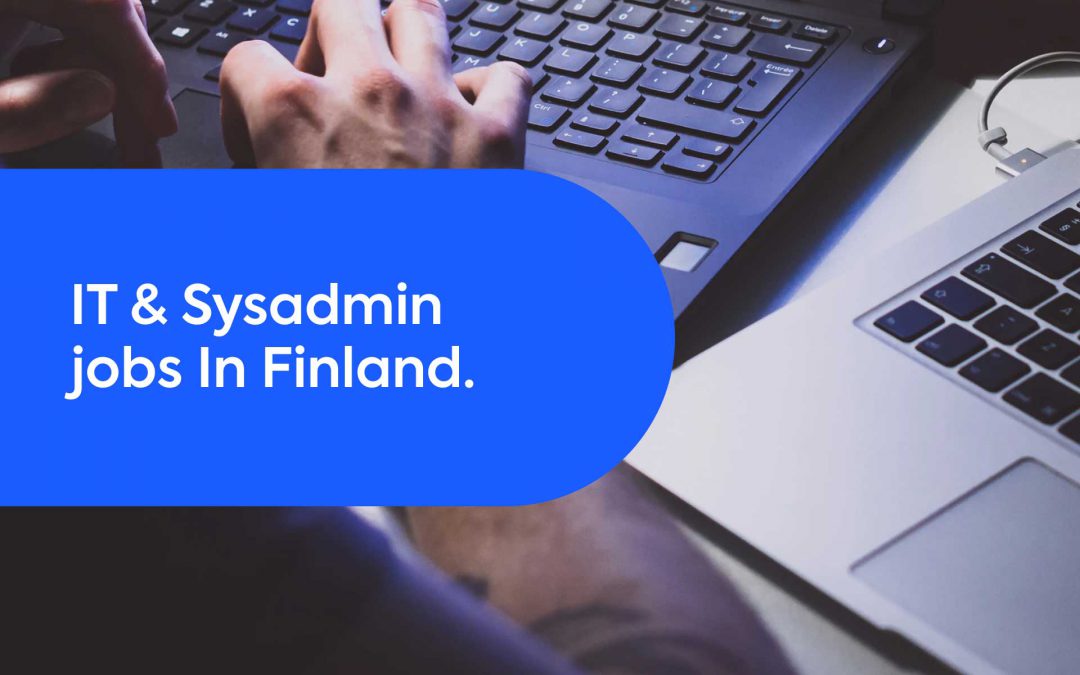 There is possibly no other industry where skill has a shorter relative life-span than in the IT industry. One day, you’re just about caught up with all the current skills of the period, and the next, someone goes and invents an entire new programming language.

Take this alongside the general premium on candidates in STEM occupations, and the IT industry is faced with two interesting challenges. On the one hand, candidates with enough skills to even get hired in the first place are relatively scarce. So, as talent looking for a shot at IT jobs in Finland, you have a realistically good chance of finding the job you want.

On the other hand, the fact that the ICT industry constantly lives on the boundaries of human capacity and invention lends its own challenge. It means that candidates that were eminently qualified when hired may barely cut it a year later.

That is the skills conundrum facing the global industry and the local market for IT jobs in Finland. If you are a candidate looking to get in on these jobs, you’ll need to constantly be on the school run; learning, un-learning and re-learning as fast as you can.

Do you have what it takes to succeed in these jobs? What are the skills that you need to focus on? We have the stats and facts you’ll need right here.

IT jobs in Finland: An overview

Like some of its neighbours, Finland also has a strong ICT industry. As at 2017, the sector employed about 6.8% of Finland’s workforce, the highest in the EU at the time. Compared with the EU average of 3.7%, the country boasts almost double that figure.

The IT industry and the larger technology industry, are considered the most important export industry in Finland. Employing a total of 700,000 people directly and indirectly, the sector is responsible for 70% of all investment in research and development in the country.

Operations of tech companies in Finland also represent more than 50% of all Finnish exports. Unsurprisingly, the ICT industry brought in a turnover of more than €12.6 billion in 2017, 6% more than the previous year.

One of the biggest advantages that Finland offers international businesses is its relatively low cost of doing business. The country has the world’s highest data usage per capita and second-highest mobile broadband penetration rate. This ensures that companies and startups spend less on R&D while encouraging more companies to spend in the country.

In 2015, the country ranked sixth in Europe for ICT R&D expenditure as a percentage of GDP, at 5%. Conversely, the average cost of a 20-man R&D team in Finland is 50% less than what obtains in Silicon Valley. Considering this, it’s not surprising that more and more IT companies are choosing to call Finland home.

Who do companies want to hire?

From MeetFrank data on offers for IT jobs in Finland over the first half of 2019, candidates in senior and mid-level positions received the joint highest offers. An almost similar amount of offers was made to lead IT and systems admin professionals while the least offers were made to junior and entry talent.

The data shows a market trend that bends more towards experience and skill. Talent that wishes to get in on the act for IT jobs in Finland would do well to acquire the necessary skills that will help them start a little further along the ladder. 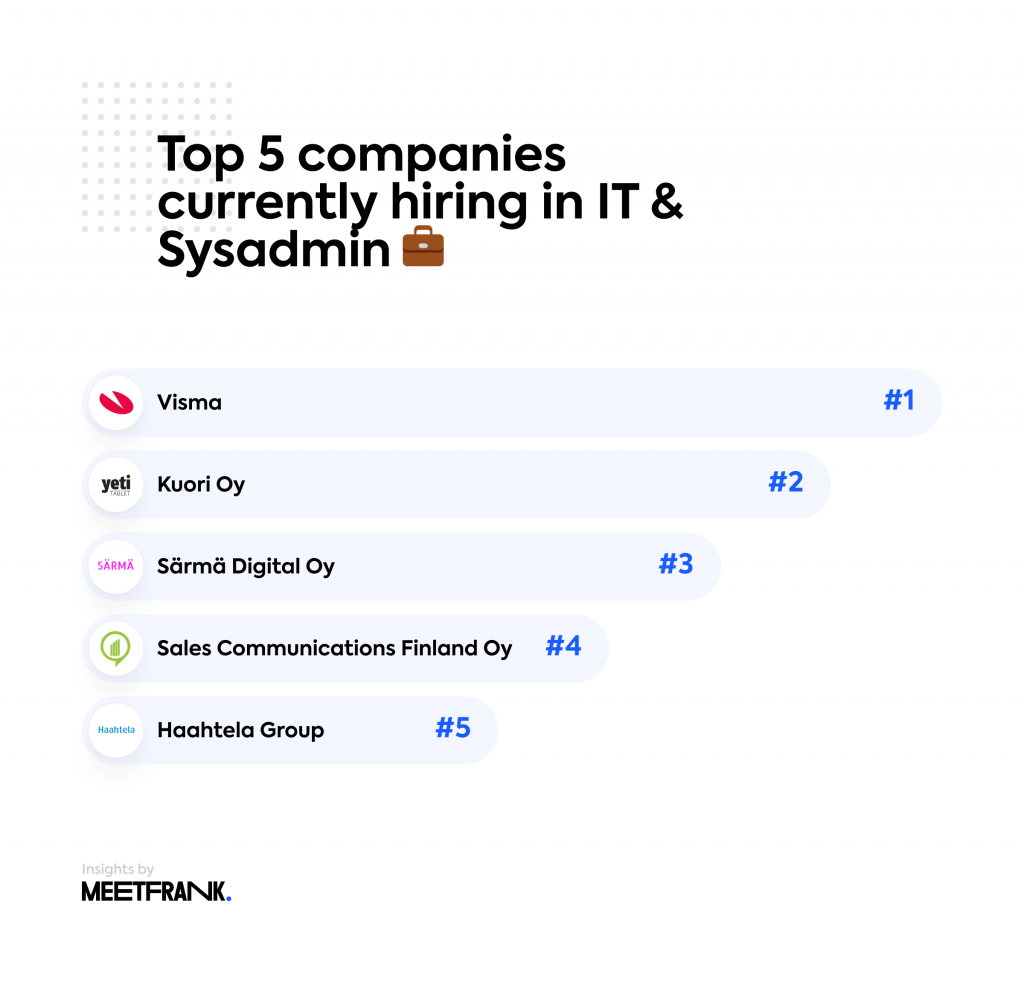 The top ten companies leading in recruitment for IT and systems admin professionals over the period include Visma and Factory Harmonizer. Others include Särmä  Digital Oy, Kuori Oy, Sales Communications Finland Oy, Haahtela Group, Mavericks Out, Eficode, Rapal and Cuuma Communications.

Up-skilling and re-skilling for IT jobs in Finland

Skills are a bigger issue for IT and systems admin jobs than for most other occupations. Candidates must constantly be on the sharp edge of what is current in their profession to be considered relevant and worthy of hiring.

In a recent report by the Brookings Institute, the World Economic Forum reported that 54% of talent in ICT will need re-skilling and up-skilling by 2022. That means more than half the global ICT workforce will need to skill up in just about 3 short years.

From MeetFrank data, the top five skills in demand for IT jobs in Finland over the first half of 2019 are instructive. Required in 14% each of all job offers, Docker and DevOps were the most in demand skills for the period. 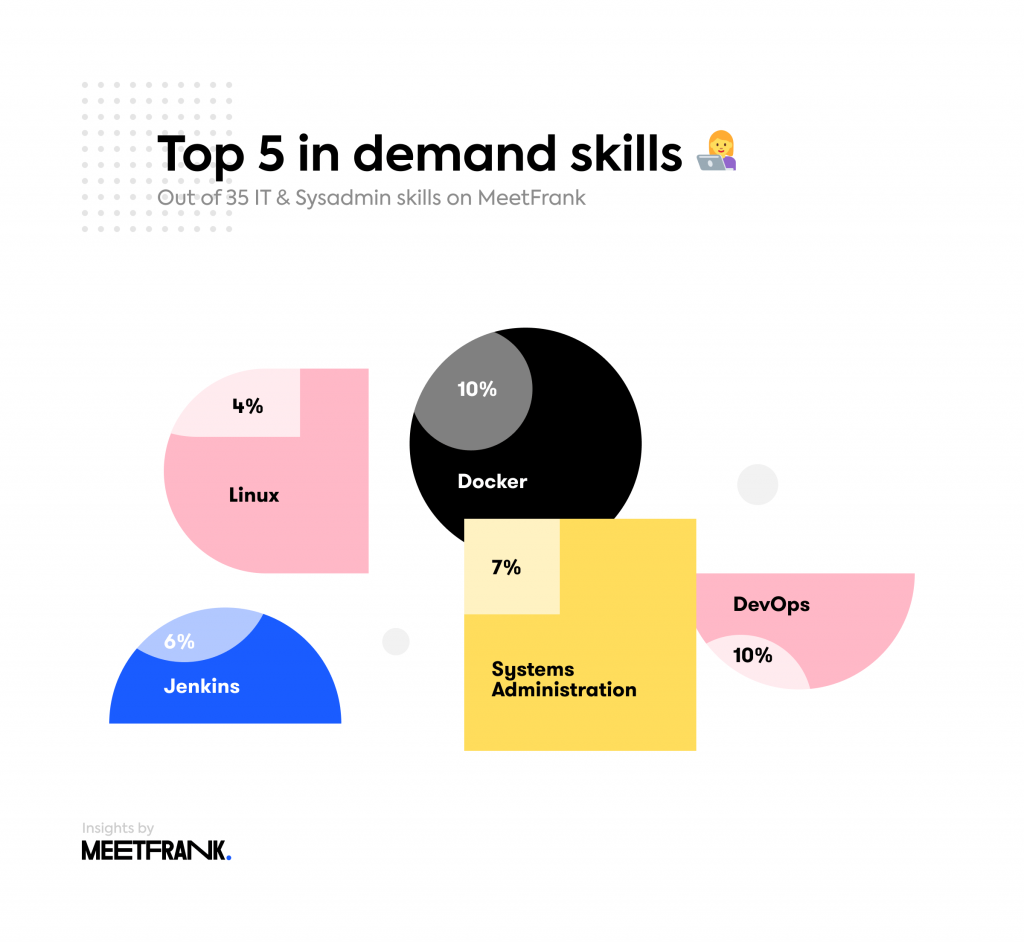 Systems Administration, Jenkins and Linux made up the rest of the top five with 7%, 6% and 4% respectively.

Considering that Finland lays claim to being the country that gave Linux to the world, candidates for IT jobs in Finland may well be wizards in the language. That should come in handy too, since Statista reports that 80% of ICT companies around the world have an unsatisfied demand for Linux-speaking professionals. 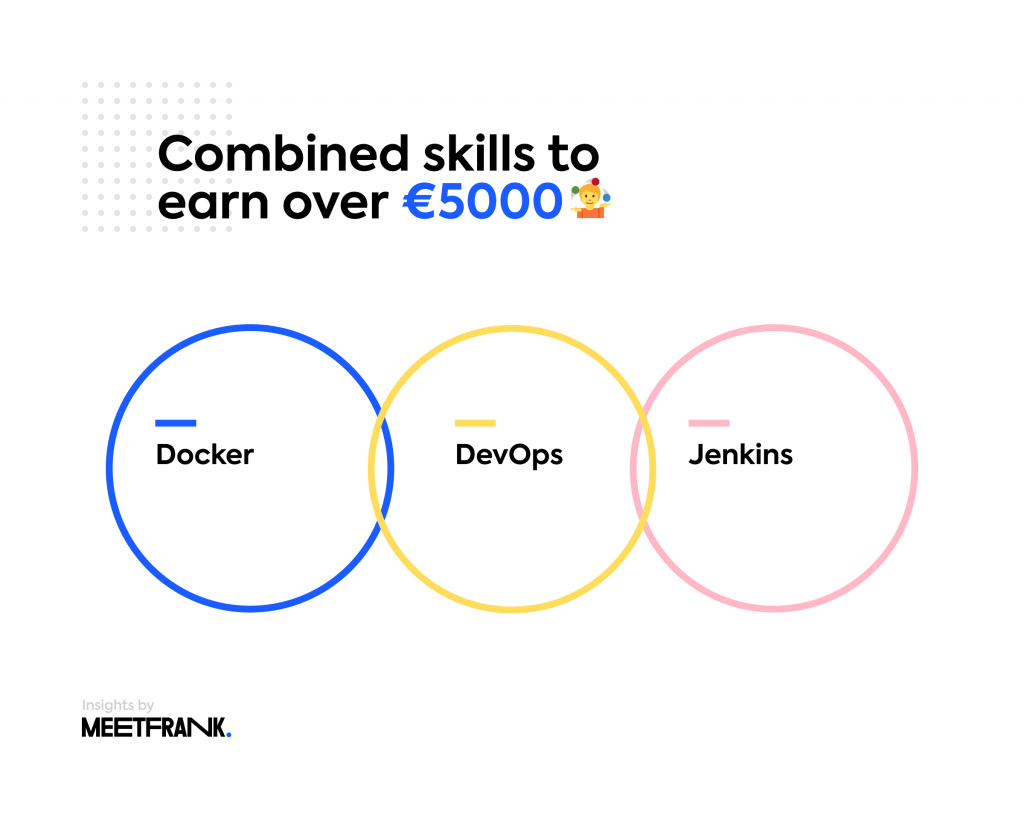 Want to increase your hiring ceiling for IT jobs in Finland? MeetFrank data indicates that to earn more than €5,000 a month, talent must be competent in Docker, DevOps and Jenkins.

How much can you earn on IT jobs in Finland?

IT jobs in Finland are amongst the best paid jobs in the country. From MeetFrank data talent in these jobs earned an average of €4,000 over the first half of 2019, with some entry positions even starting at that amount. 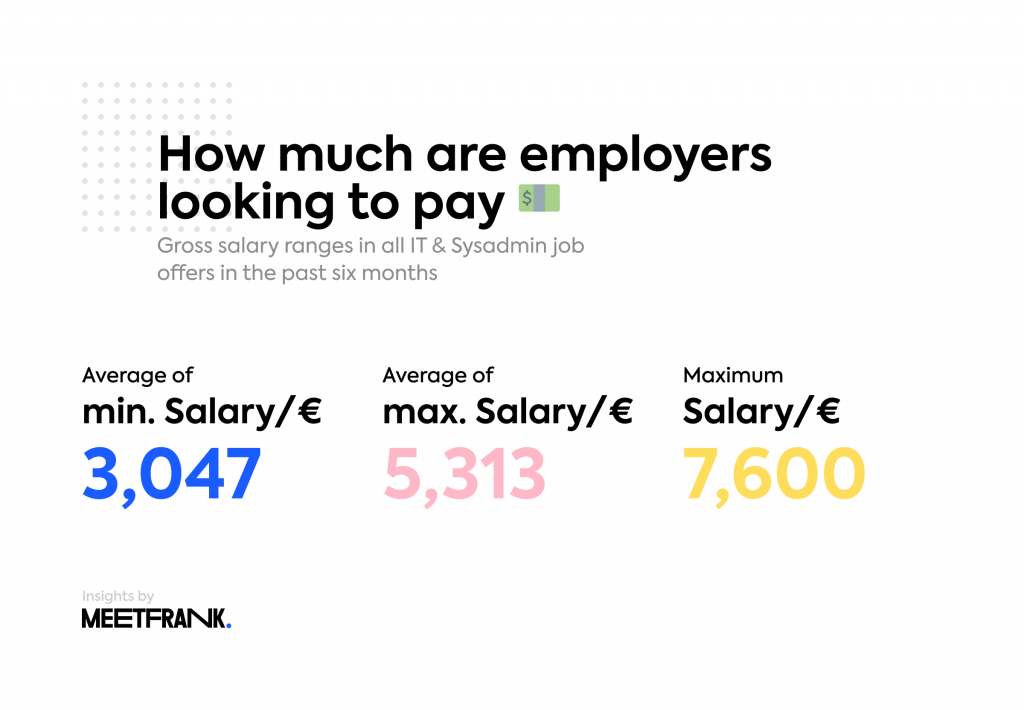 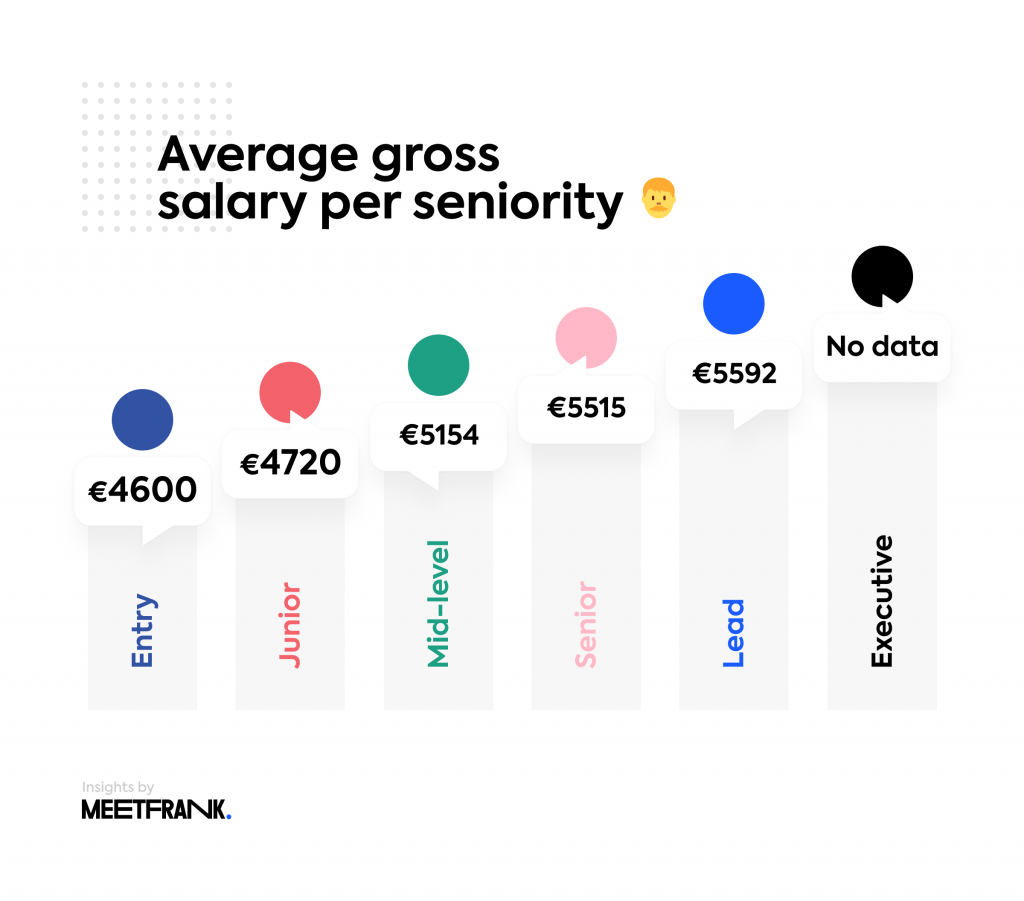 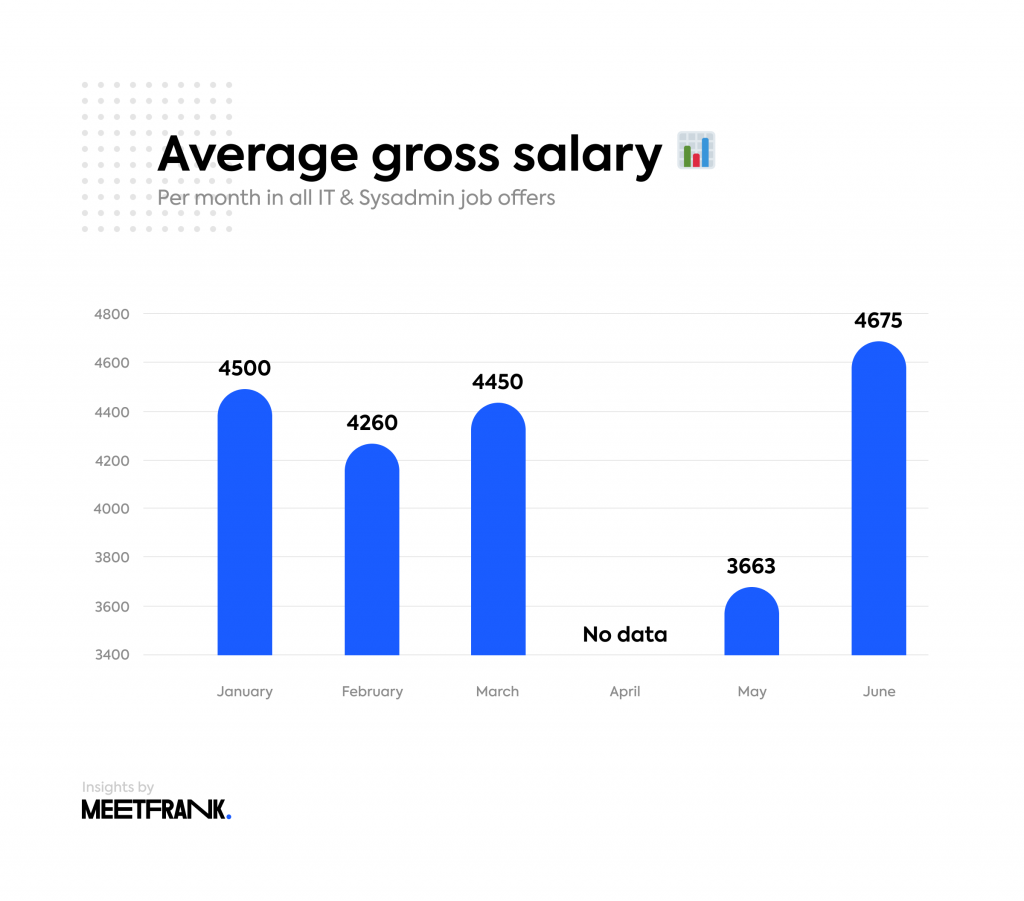 Data on salaries from month to month indicated that average salaries held between a low of €3,663 and a high of €4,675.

Talent making a run for positions in IT jobs in Finland should keep an eye on the market, so they know the necessary trends and demands that will shape hiring.

This is made extremely easy by MeetFrank. You can use our insights to get information on the jobs that interest you and the requirements of hirers. Simply download the app for Apple or Android today to get started.

Recruiters can also use MeetFrank to iron out their recruiting challenges. Do you have an issue you’d like to resolve know your hiring process? We can help you. Reach out to start a conversation and see how MeetFrank works.