This article is based on data from MeetFrank Job Market Insights. For additional and per-track reports, visit this page.

Lithuania ended its lockdown on June 16, and now more and more countries are being added to the ‘welcome’ list after the Baltic Bubble agreement between Lithuania, Estonia, and Latvia. This agreement had started back in May. 🧳🌞

Before switching to July’s stats, let’s make a recap of May’s and June’s and see how the Lithuanian job market was doing at that time.

✅The average offered salaries were higher than the expected salaries in Lithuania.

✅ It turned out that Lithuania-based companies were up for remote offers especially in the month of May and June. The star industry for these was Software Engineering. 🤩

Let’s see what July has brought so far. Ready? 🚀

The Lithuanian job market saw a small increase in the number of active job seekers by the first week of July, just like in Finland and Estonia. 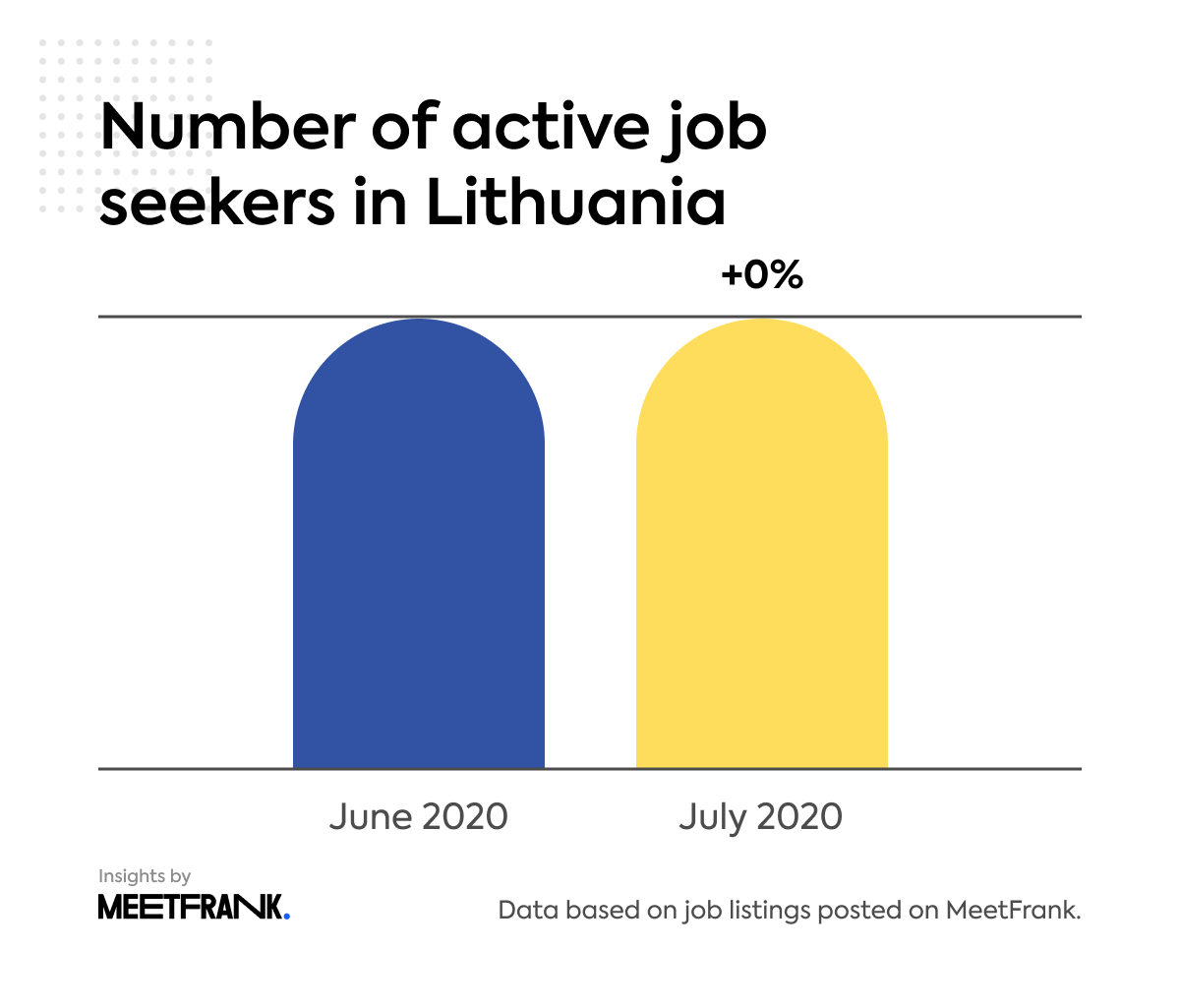 Normally, there’d be less job applications in summer. But, as we all know, this is no ordinary summer. As the uncertainty still continues, job seekers seem to be looking for new opportunities.

And now, we have some good news here!

Unlike Finland and Estonia, it has become easier to find a job in Lithuania lately. The slight increase has put the ease of finding a job at the sweet spot of “OK level”.

For software engineers and IT & Sysadmin experts, the situation is even better. 👍

Want to know more? No worries, we’ll share a more detailed analysis of the ease of finding a job in the top 6 industries later in this report. Almost there! 👀

If money could talk, what would it say about the average gross salaries in the Lithuanian job market lately? 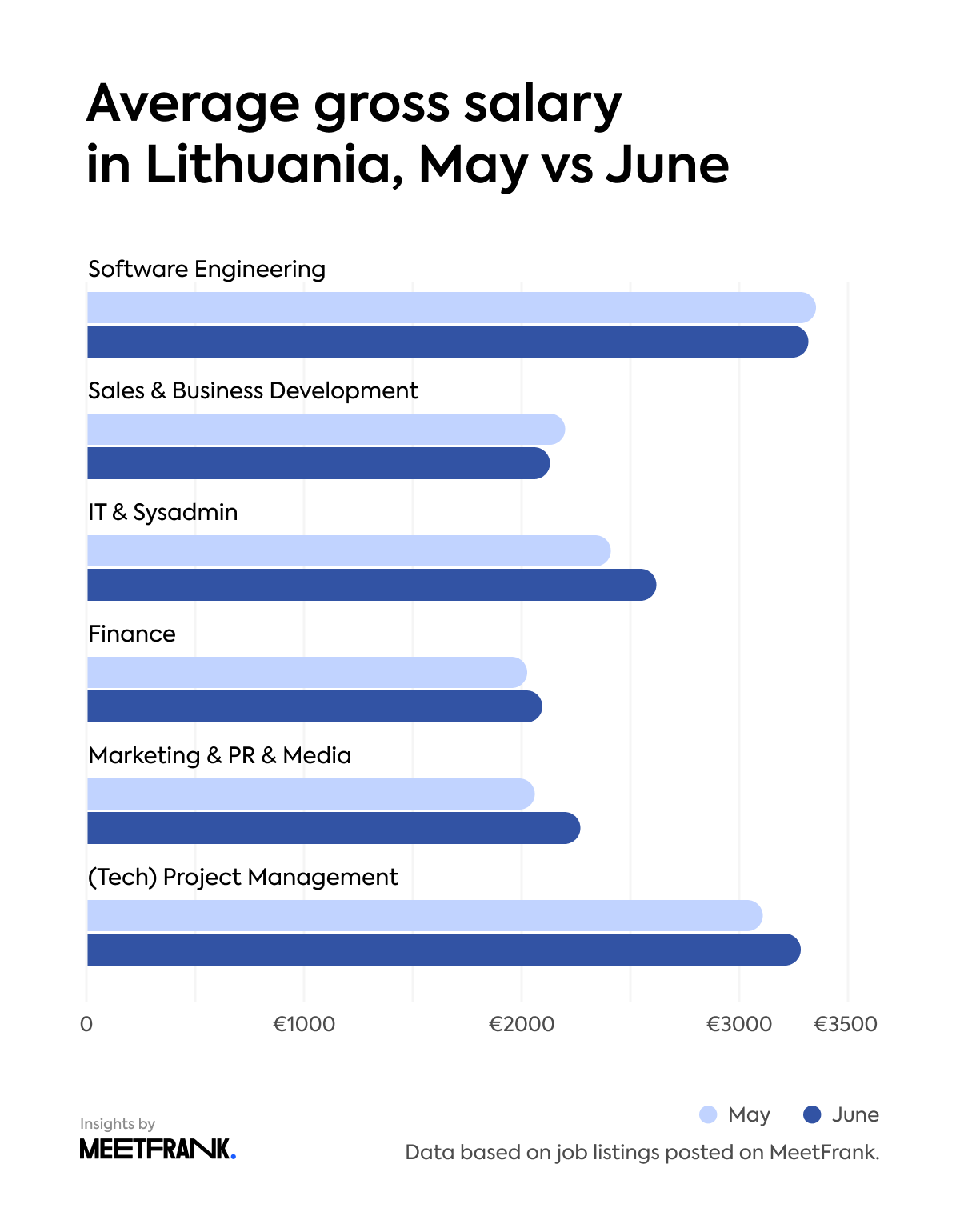 👉 Unlike in Finland and Estonia, the average gross salaries increased in all industries in Lithuania. When it comes to recovery, Lithuania is apparently doing well. 👏

👉 Software Engineering saw a slight decrease in the average gross salaries in June.

👉 Even though the salaries in Lithuania have been a bit lower than in Estonia and Finland, the increase rates are still higher compared to those in these two countries.

So, what are job seekers expecting from companies? And more importantly, have the expectations and offerings matched so far? 🥁 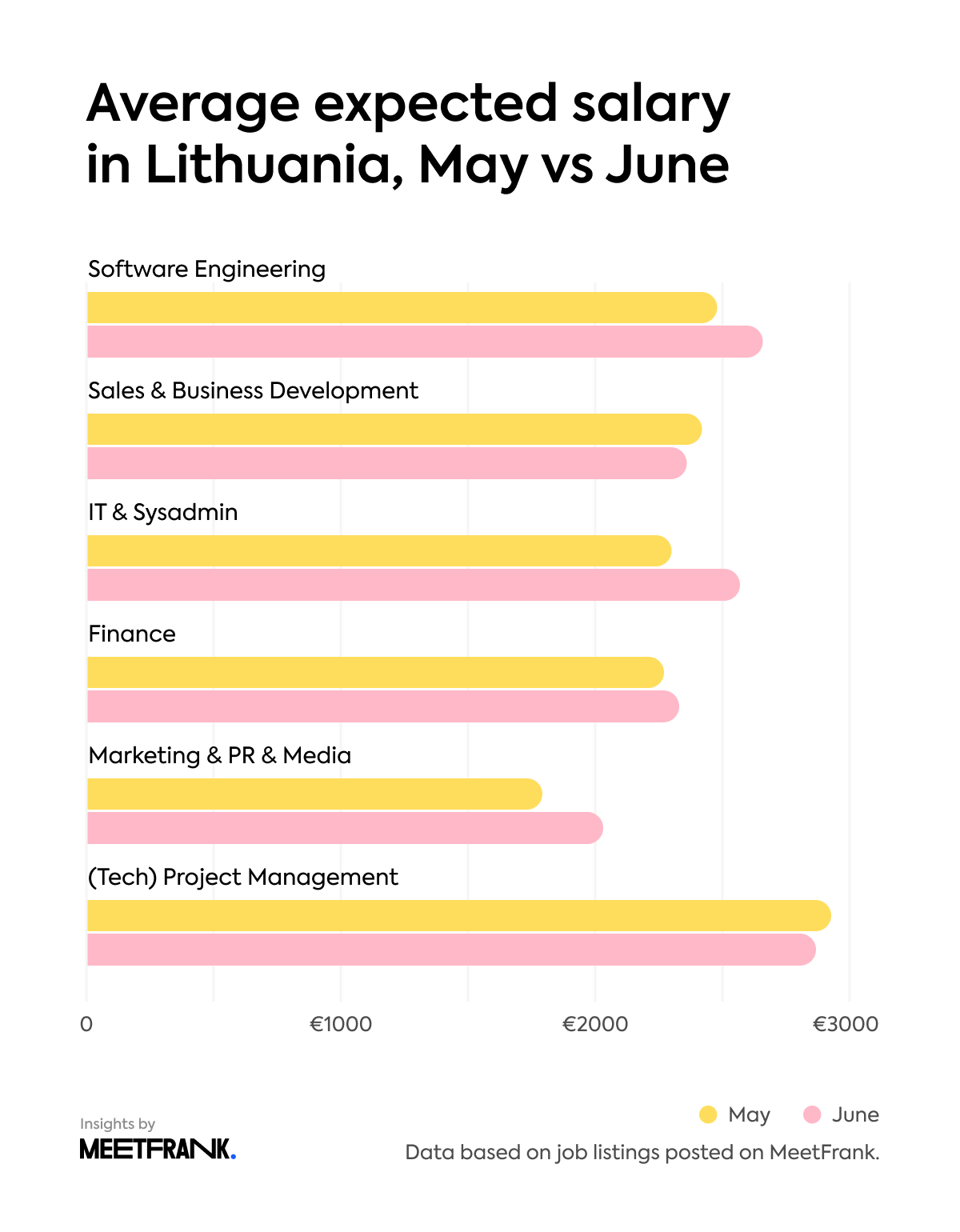 👉 The average expected salaries were significantly lower in Lithuania in most industries compared to those in Estonia and Finland.

👉 Sales and Business Development and (Tech) Project Management saw a decrease in the expected salaries.

👉 Apparently, marketing & PR & media professionals are the ones who have made the biggest revisions to their expectations with an increase of 265EUR in June.

Despite the increase in the average expected salaries, the offered salaries are still lower in all industries except for Sales and Business Development and Marketing & PR & Media for now.

Now, let’s have a look at the market competitiveness in the top 6 specialties in June in comparison with May. 🔎 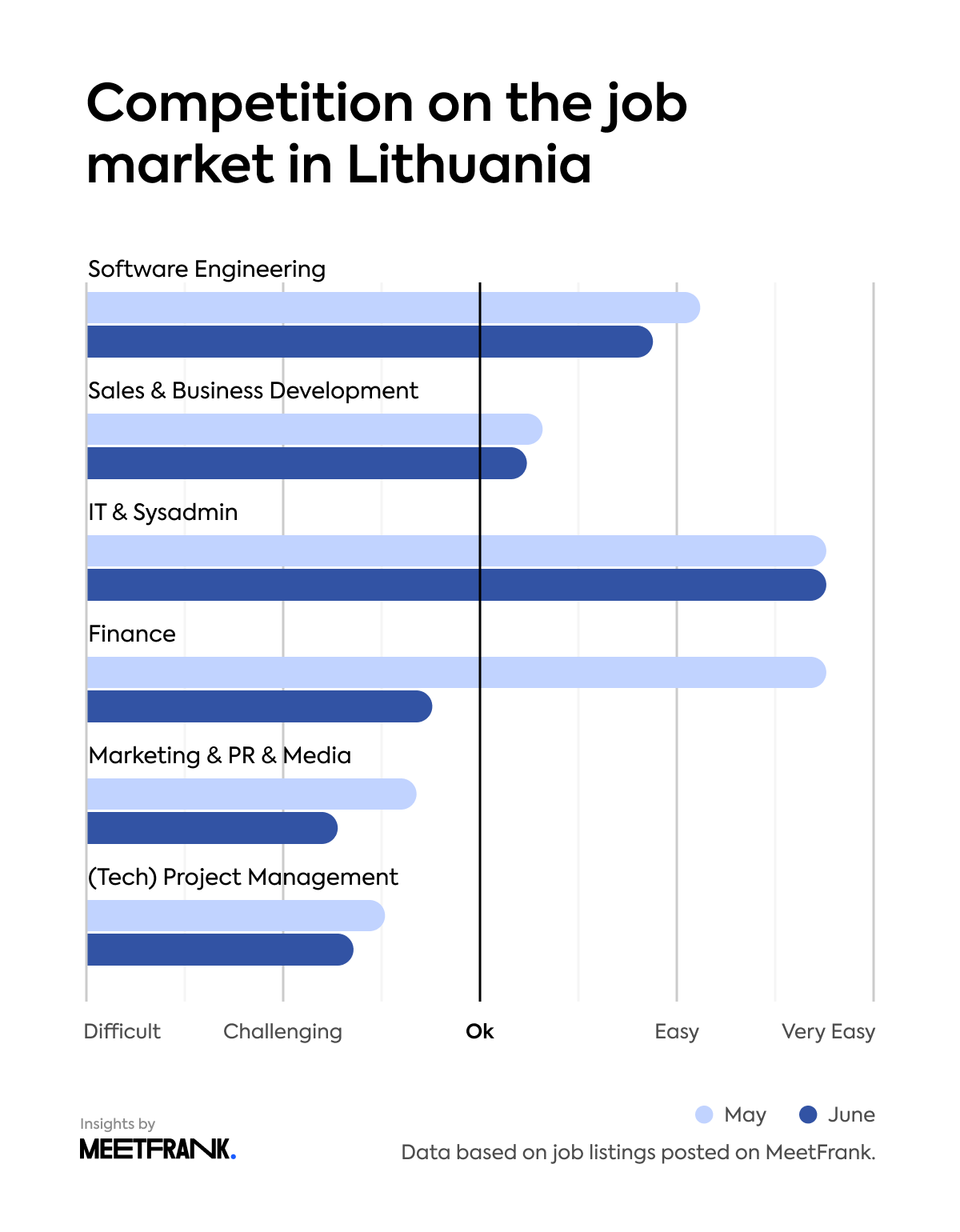 It’s become more challenging to find a job in all industries in Lithuania except for IT & Sysadmin, which was already at the comfortable “almost very easy level”.

Despite the positive vibe in the air for Finance professionals looking for a job in Lithuania in the past, now it’s become drastically challenging. 😵

Software engineers may also find it a bit harder to find their dream roles nowadays. But who knows, maybe the end of July will bring much better news for all industries. 🙏

TOP 10 Companies with the Most Applications in June 2020

Which companies attracted the most applications in June and which industries are they operating in? 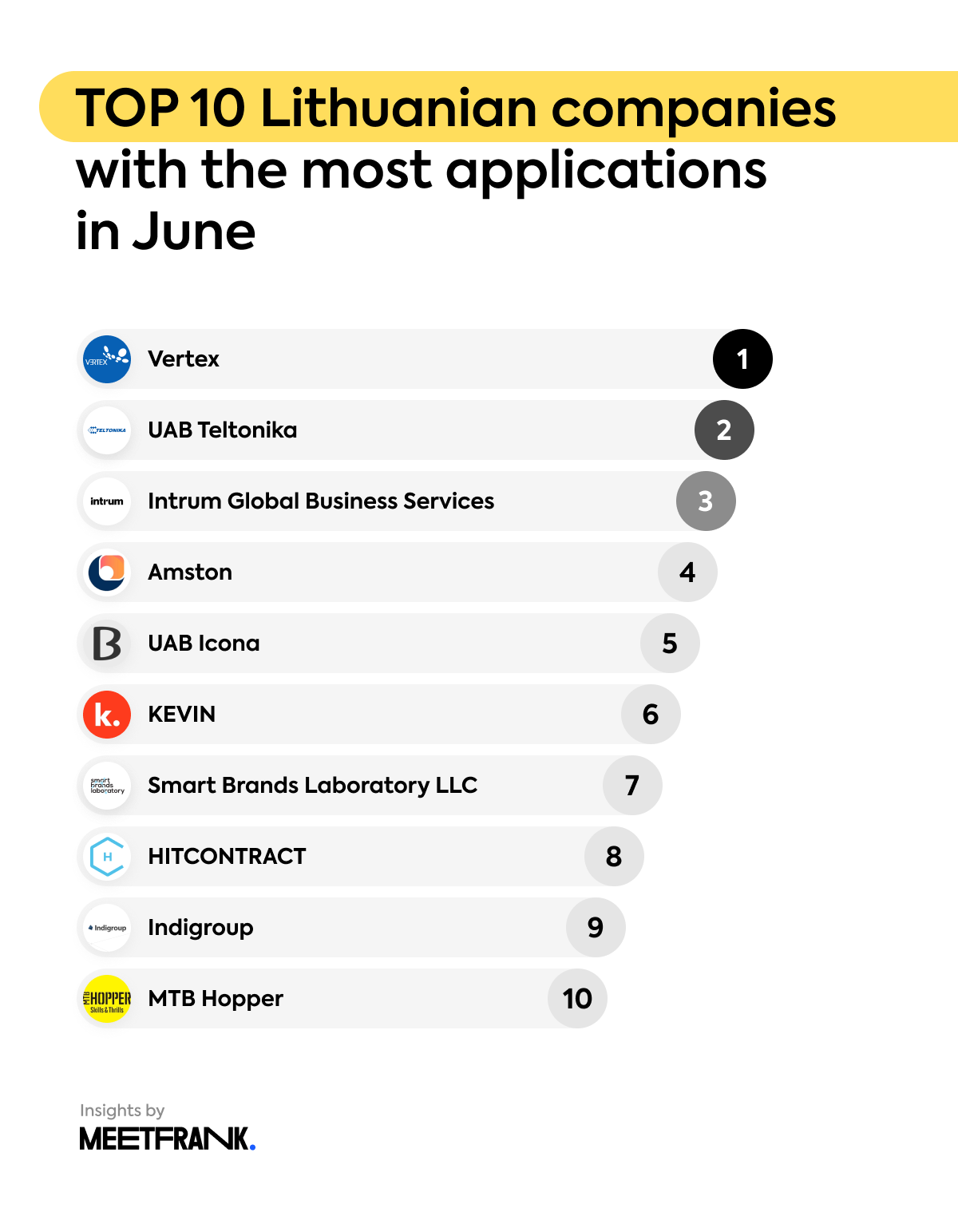 Let’s start with the top 3. In first place, we see Vertex, an innovative IT company specialising in IT projects like omnichannel support & marketing tools, e-commerce products, and more. 👏

It seems the top 3 choices for job seekers are revolving around the IT and Finance industries. 💰 🤓

What about the rest of the list? Looking at the fourth and fifth places, we see Amston, a consultancy and recruitment company, and UAB Icona that operates under BeDigital and is expanding businesses to new markets.

Recruitment, Digital Marketing, and SaaS make up the leading industries in the list. 💪

Welcome to the MeetFrank family!

Wondering if they’re hiring? Well, here are the most recent openings from these companies: