Software Development Jobs in Lithuania: All You Need to Know 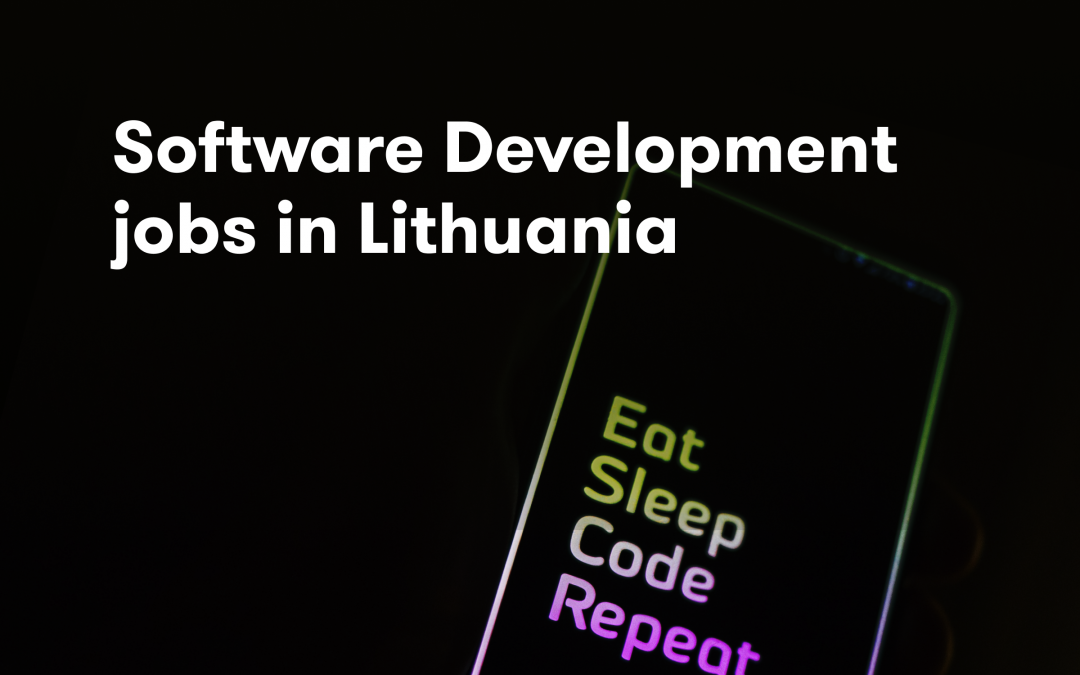 Its population is mightily tech savvy, and its insane internet speeds set the country up as nirvana for creatives. Quite simply, Lithuania is a software developer’s dream.

And when you want to know what’s hot for software development jobs in Lithuania, where do you go? That’s right. You scoot on over to MeetFrank.

We happen to have the hottest stats and data on software development jobs in Lithuania right here for your pleasure. Shall we dig in?

The Lithuanian IT and software development sector is big. The sector employs 31,500 IT specialists, with 10,600 students in dedicated IT schools and up to 2,500 graduating annually. The country has made loads of investment in its info tech sector and this has set it apart as one of the best digital destinations in the world.

Lithuania’s biggest strength lies in its youthful and tech savvy labor force. One of the most versatile IT labor forces in Europe, the country’s work force is grounded in a wide variety of digital competencies. 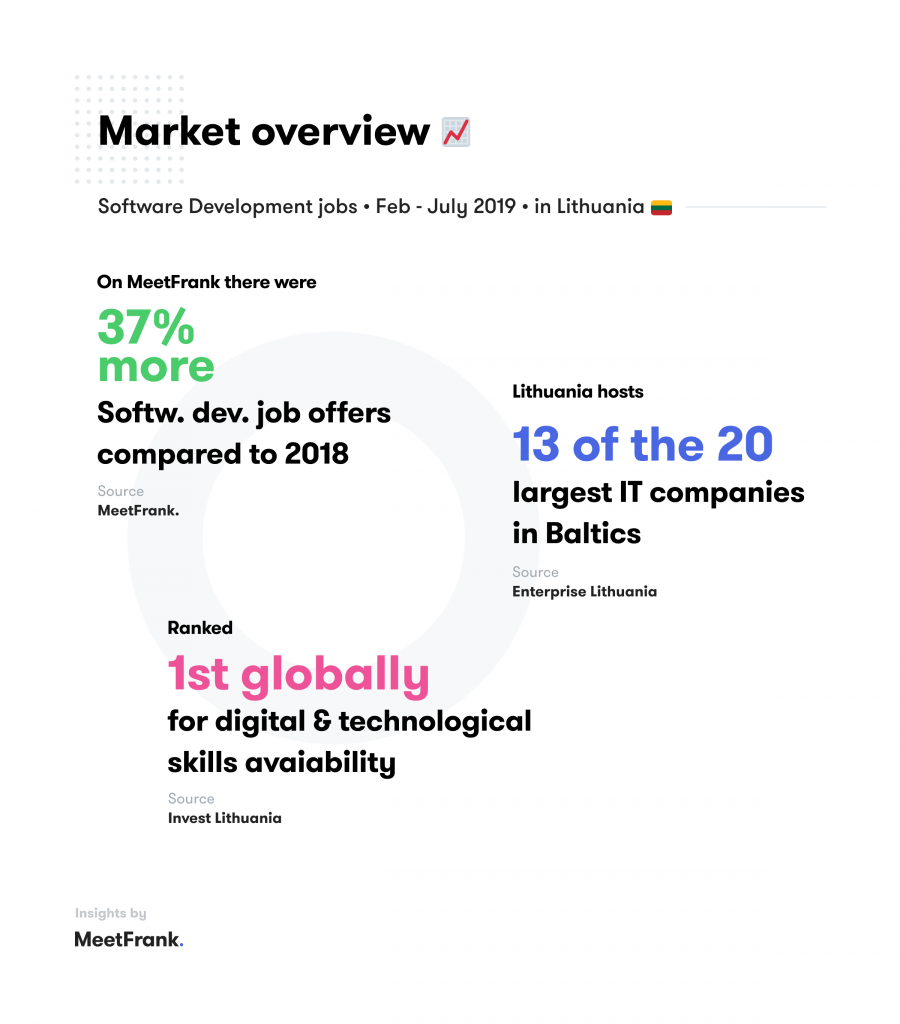 Lithuania is rated 1st globally for digital / technological skills availability and is 3rd globally in mobile app creation. It has an open and inclusive work environment and ranks 1st in the EU for share of women scientists and engineers.

The country also has reliable digital infrastructure and is rated 5th globally in fulfilling business needs. With internet speeds blazing away at 65 mb/s, it has the fastest public WiFi in the world, also considered the most affordable internet in Europe.

The country has over 98% 4G broadband coverage and is already laying down 5G networks. 5G was launched in the country in 2018 with record speeds of 1.8 gb/s.

Whew! We need to catch our breath after that.

Our data also revealed that offers on MeetFrank for software development jobs in Lithuania grew by 37% in the first 6 months of 2019.

Lithuania has a highly skilled IT workforce, one of the best skilled in the EU. Employers are also aware of this and will make offers consonant with those skills.

MeetFrank data showed that employers made a lot of offers for software developers with skills for mid-level and senior roles. In fact, offers for these two levels were 2nd and 1st respectively, within the first 6 months of 2019.

Offers for lead roles were 3rd overall, while entry, junior and executive roles received the least attention. There was quite a distance between offers for senior, mid-level and lead roles, compared to the other roles.

The salaries per seniority do not entirely reflect this disparity in offers per role though. Entry and junior employees earned an average of €2,113 and €2,372 per month respectively. This makes sense, considering that candidates in these roles would be the least skilled members of the team.

The close spread between average salaries for these roles does not seem to indicate much difference in the skills and responsibilities of individuals in the roles.

Executives earned the most on average, with a monthly salary of €3,990. This is consistent with their role as team leaders and directors of strategy.

The general averages for minimum and maximum gross salaries did not display any close spread though. The average minimum between January and July 2019 was €1,499 while the average maximum was €3,281. 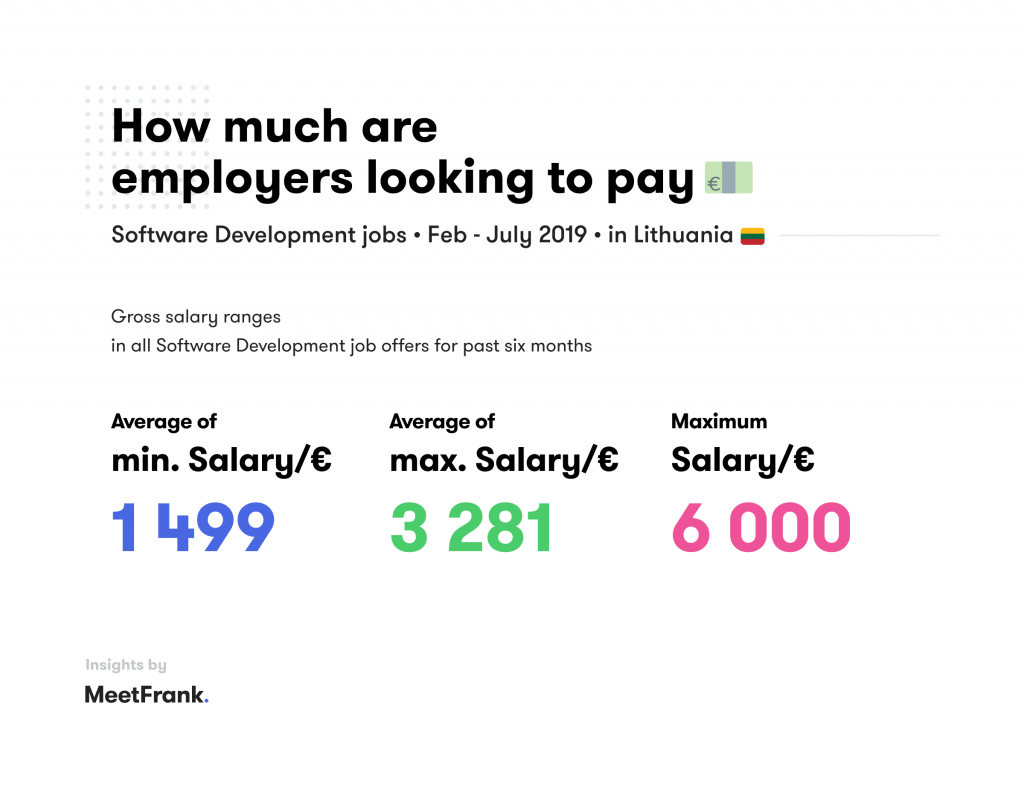 The highest salary offered on the platform was almost double the average maximum though, at €6,000.

Monthly averages were a lot closer than that though. January started out with an average of €2,194 while February’s average was €2,068. The highest for the half year was posted in July, at €2,844.

There’s one intriguing aspect to the data though. Generally, summer months witness a reduction in general average salaries offered. This is often due to reduced recruitment activity during the period. 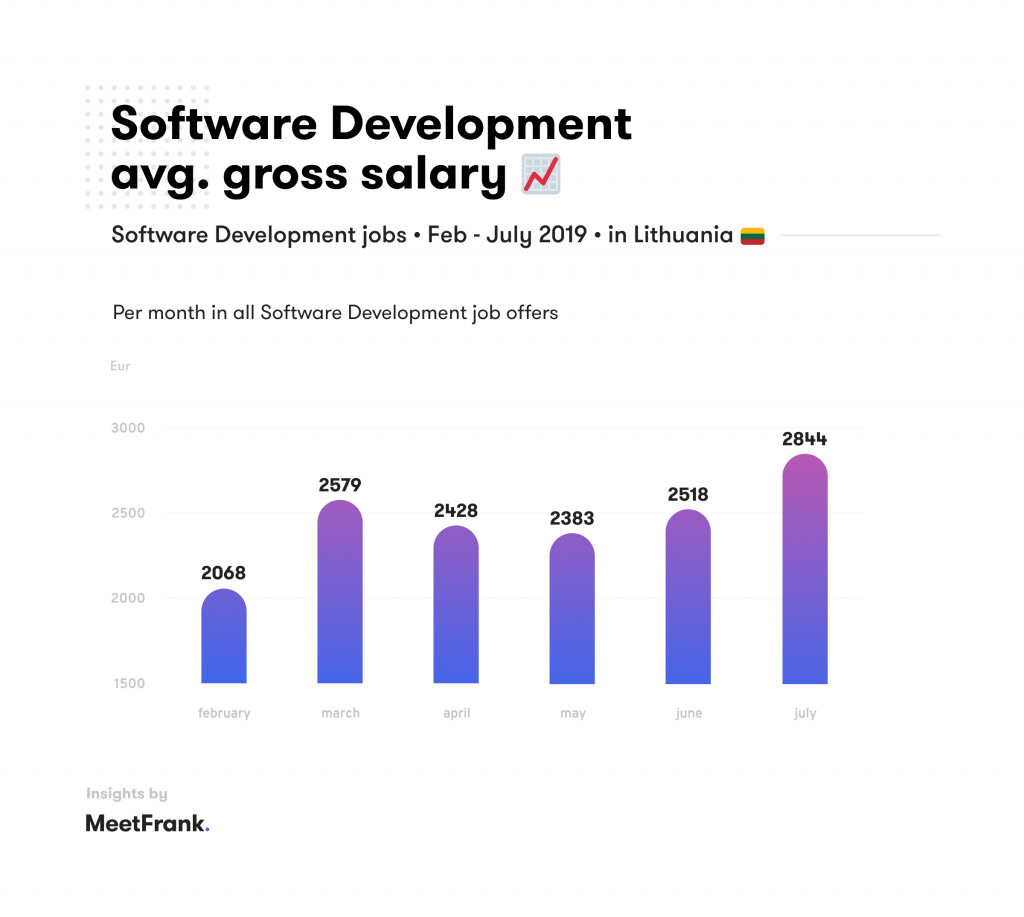 The period was better than usual for software development jobs in Lithuania though. From the high point of €2,579 in March, salaries were barely lower in May as the average of €2,383 showed. June was even better with €2,518. Intriguing eh? Seems there wasn’t much of a summer break in Lithuania this year.

Most wanted skills for software development jobs in Lithuania

Out of a total of 106 rated skills, competencies in backend and full-stack development were required by employers 8% of the time.

Requirements for JavaScript, frontend development and SQL made up the rest of the top 5, being required 6%, 5% and 4% of the time respectively. 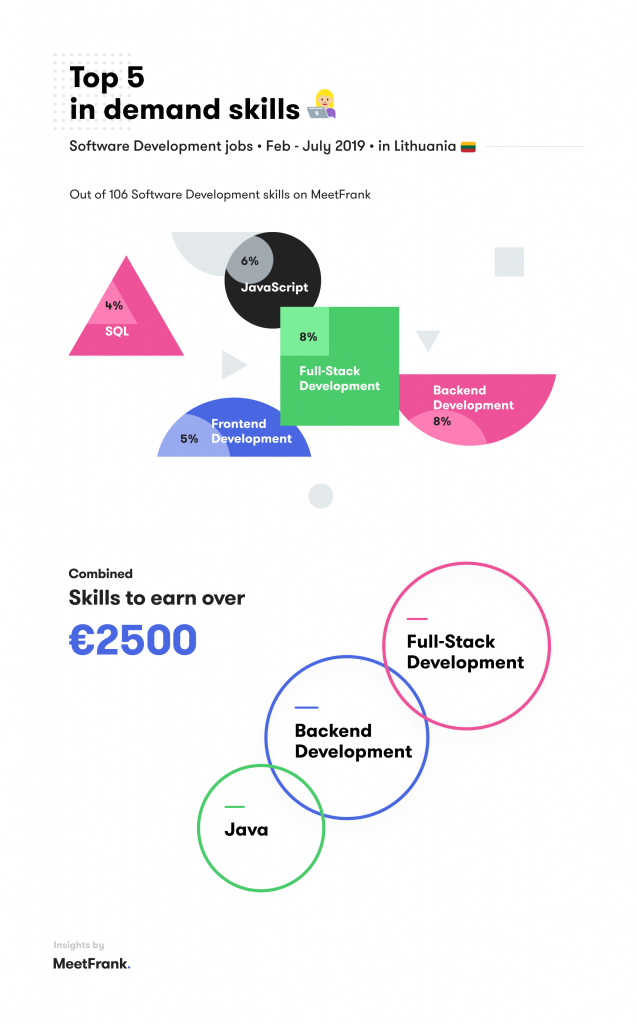 The top three skills provide all the insight you need if you’re wondering what skills are required to earn big. In order to make north of €4,000 per month, you need to be proficient in full-stack development, backend development and speak some pretty good Java.

Preferences of candidates and companies doing the most

Our data shows that Lithuanian users of MeetFrank want to work for startups, the coolest offices (don’t we all) and from remote workspaces. Companies that fit the bill include Baltic Amadeus, Rokkex and Kilo.Health. 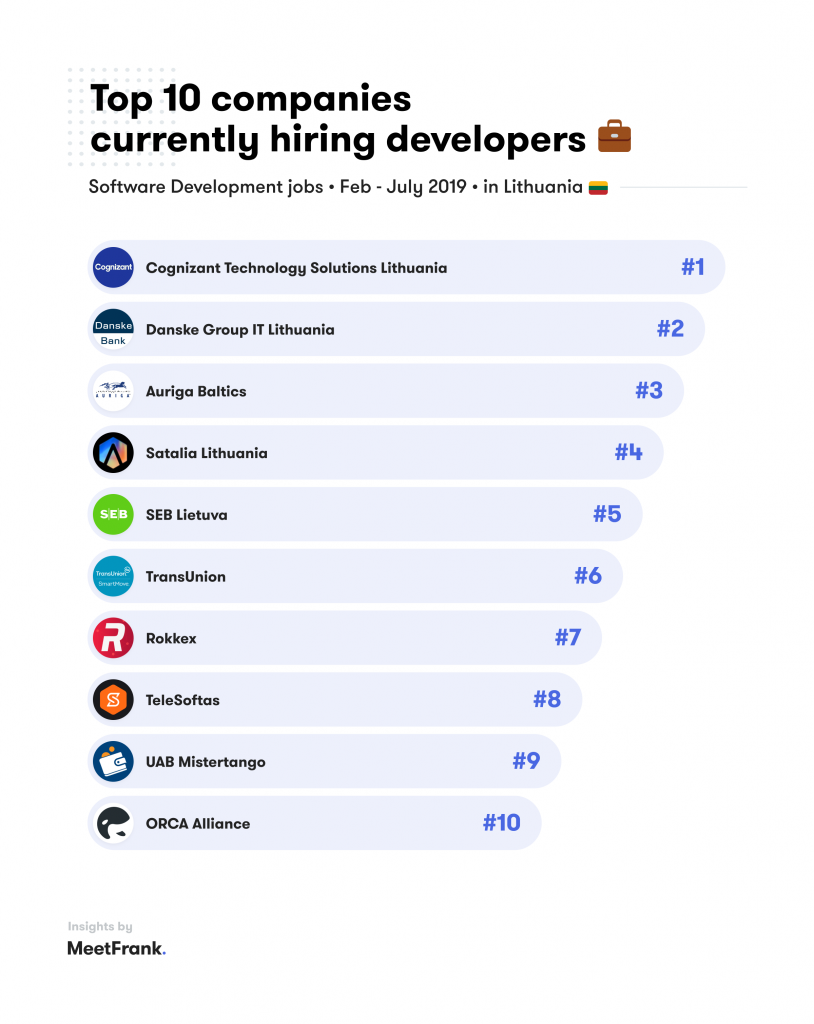 Kilo.Health is a particularly interesting option. If you’re looking for a cool place to work, a company with a tagline that reads “rebels, weirdos, super socials or ultra silent ninjas – join our digital squad” should tick every box.

The company is a digital health startup with over 5 years in the industry. It runs 10 different products in the health industry including web applications, diet planners, customisable meal recipe generators etc. These “digital ninjas” are definitely out to kick off some beautiful disruption. Check them out here on MeetFrank.

A truckload of companies are currently hiring for software development jobs in Lithuania. The top ten amongst them include Cognizant Technology Solutions Lithuania, Auriga Baltics, Rokkex and ORCA Alliance. You can find everything you want to know about them on MeetFrank.

It’s safe to say that the environment for software development jobs in Lithuania is positively bubbly. There’s plenty to take in everywhere you look, and things seem set to only get better.

MeetFrank helps you find access all the data, all the juicy bits and the hot trends you need on software development jobs in Lithuania, or any jobs for that matter.

The platform is made for both talent and recruiters, with its single aim being to democratise the job market. We want to make job hunting and hiring easy as you please.

Check out our app on Apple and Android stores to see what’s happening on the job market. And if you’re a recruiter, schedule a demo call with us to see how MeetFrank works.