How to Find the Best Software Development Jobs in Finland 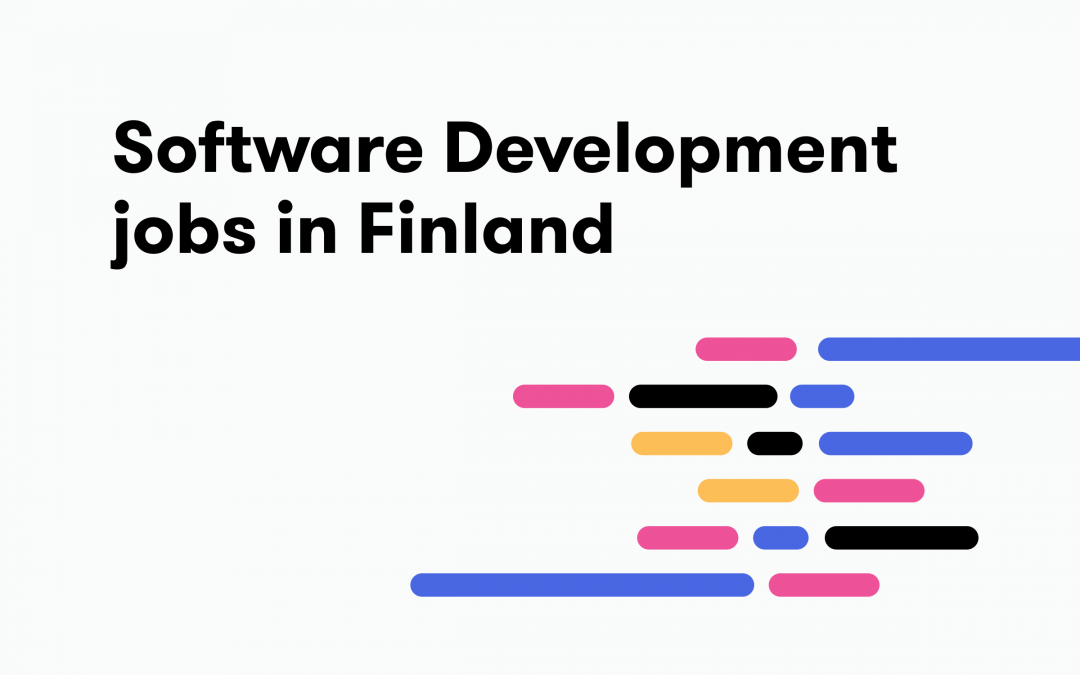 If you’re wondering what it will be like to work in one of the software development jobs in Finland, you should know it’s likely to be a bit “wild and watery”.

Finland is home to 188,000 lakes. In case you’re wondering if that’s a lot, it’s a global record. That’s the most amount of water in relation to land mass you’ll find anywhere in the world.

The country is also 70% forest, encompassing an area larger than the whole of Italy. A beautiful country to live and work in, there’s plenty allure to the opportunities that the country offers.

With IT industry sub-sectors that employ up to 27% foreigners, you can be certain that there’s a home for you in Finland, no matter where you’re from.

Drawing from our stats sourced from offers on MeetFrank, we’ll share all the data you need to find the best software development jobs in Finland and how they compare with others.

Finnish IT and software development industry: A game of jobs

Gaming. That’s Finland’s largest IT and software industry sub-sector. The sub-sector is no child’s play though.

Finland is home to world leading mobile gaming companies, Supercell, Rovio and Fingersoft. The market grew by 5.9% in 2016 and set a record high turnover the same year, generating more than $2.9 billion. The sub-sector experienced a compound average growth rate of 45% from 2004 to 2015. Crazy.

The larger IT industry is also very strong. The sector employs 6.8% of the country’s entire workforce, the highest figures in the EU for 2017. Turnover in the sector was $14 billion in the same year, a growth of 8% over 2016.

Our data also shows that offers on MeetFrank for software development jobs in Finland have increased by 49% over 2018.

And all of this is set to improve in the coming years. The government has allocated more than $450 million to the industry, including direct capital funding and regional grants. This funding has been directed to support various digital projects slated to run between 2018 and 2022.

The country is pulling out all the stops in its bid to ensure that Finland becomes the premier digital destination. A four-year $226 million program called “AI Business” has also been developed to fund Finnish businesses. The program, slated to run from 2018 to 2022, aims to provide international networks and support services to Finland’s businesses.

Who do employers want to hire?

Companies seem to have a clear strategy in their recruitment for software development jobs in Finland. They display a strong preference for experienced employees, particularly those that can fit into senior level roles.

Mid-level and lead roles are also receiving a lot of attention, constituting more than half of the total offers for software development jobs in Finland.

It seems there is less of a need for junior and entry roles at the moment, although that may change in the future.

There was very low activity in the recruitment drive for executives. This indicates greater stability in executive functions and lower turnover. Companies are not expected to build out their teams with 11 captains anyway. So, this is as expected.

Data from the MeetFrank platform on average salaries for software development jobs in Finland is structured along three tracks. We considered the data for average salaries per seniority, average overall and average per month.

The average per seniority indicates a continued trend of high wages in Finland. Entry level employees earned an average of €4,359 a month, more than a majority of their peers in other jobs and other countries earn, at lead or senior level.

Employees in junior roles earned pretty much the same amount though at €4360, giving no allowance for the greater experience a junior would have.

For overall salaries in offers on MeetFrank, we calculated the total average for 2019. Developers earned a minimum average of €3,113 per month, blowing away their colleagues in other countries, while the maximum average was €5,018. 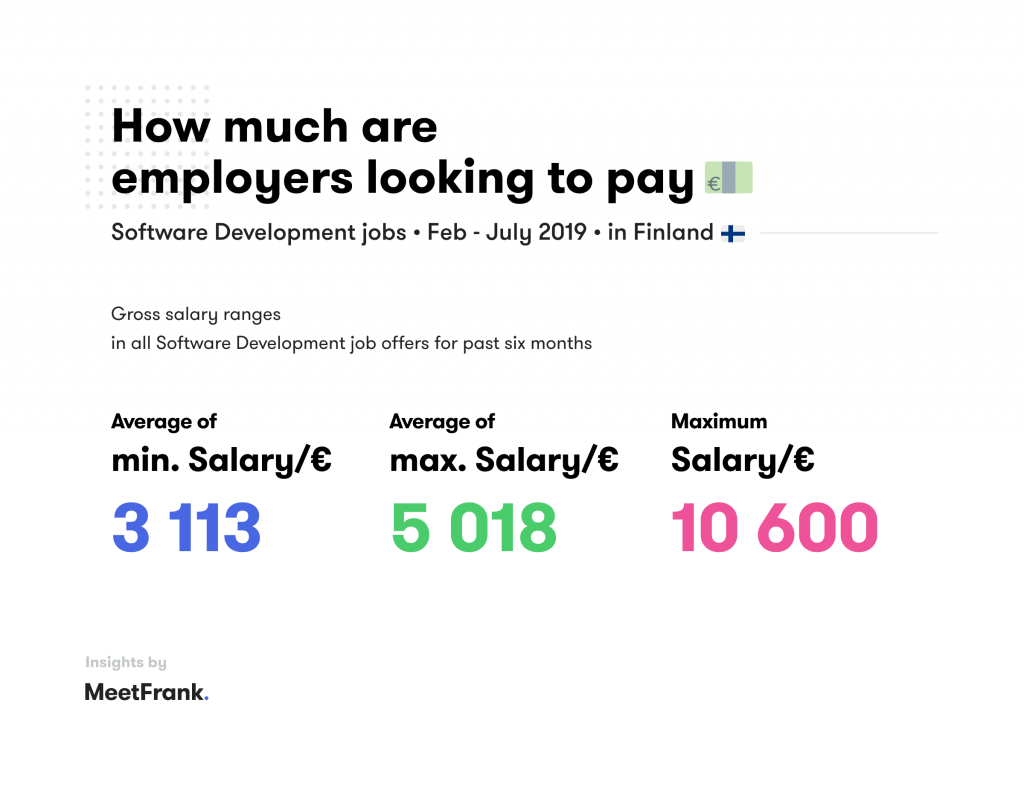 The highest salary offered for a software development job in Finland was an unreal €10,600. Yeah, you have permission to drool at that one.

The monthly averages for January to July 2019 also indicated the high salaries earned by software developers in Finland. The average for January was €4,286 while February’s was €4,139. Although there was a decrease to €3,655 in March, salaries recovered pretty nicely to €4,137 in April.

Again, we observed that the summer lull that usually affects other job tracks didn’t really show up here. Between May to July 2019, the lowest average recorded was €3,951 in May and the highest, €4,085 in July.

At 7%, the majority of employers required competencies in full-stack development in candidates. Backend development, JavaScript and frontend development came in joint second at 6% each. While REST API made up the top 5, being required 4% of the time.

What skills do you need to earn really big, maybe cop your own ten-thousand-euro payday? Well, according to our data, you need a combination of competencies in full-stack development, backend development and JavaScript to earn upwards of €5,000.

Skill up to this level, and you can look forward to your own significant payday.

Where people want to work and companies that fit the bill

MeetFrank users in Finland want to work for startups, fintech and The Next Big Thing – quite a forward-looking approach, we must say.

Companies that are a perfect fit include Visma, Hunomics, Loiston, Neverthink and Appgyver. Take a closer look at these companies on MeetFrank to see if they tick all the boxes for you. 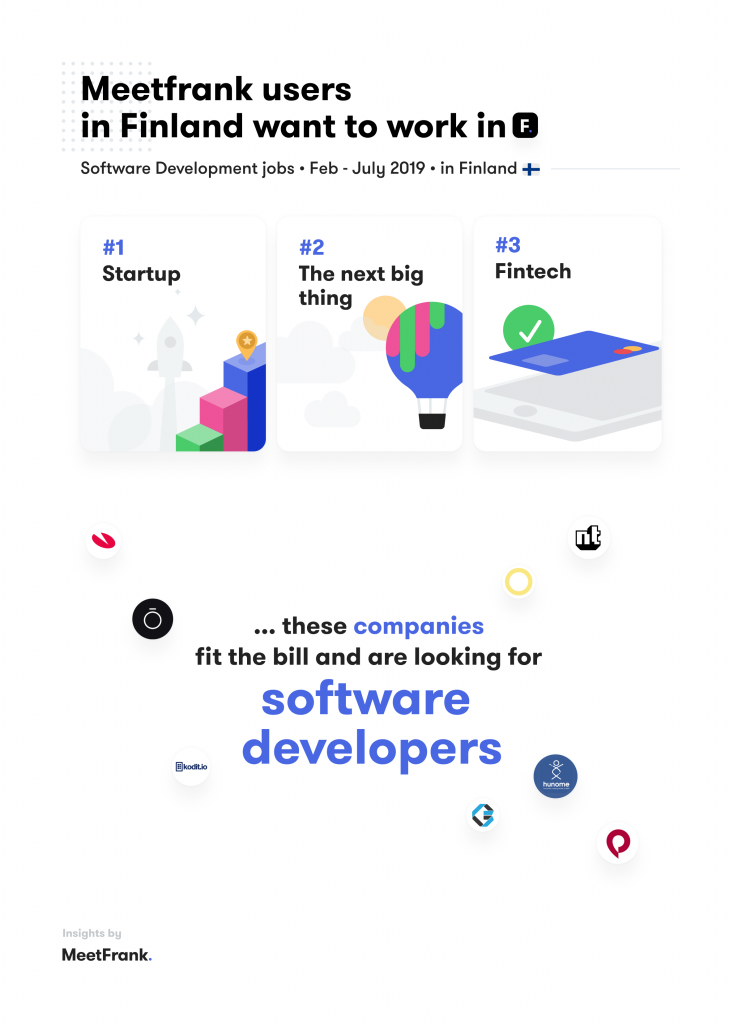 For companies actively hiring software developers in Finland, Bitfactor, Visma, BON Games and Digia Oyj are amongst the top 10. 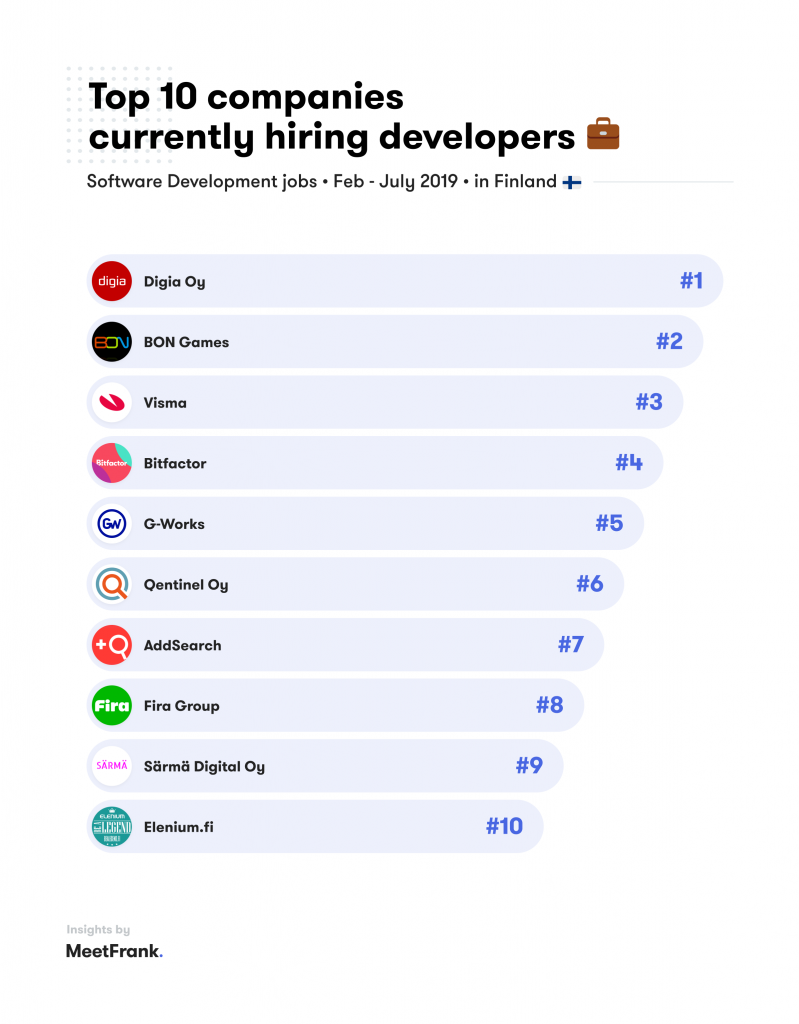 MeetFrank takes the stress out of the job market

That’s it. All you need to find the best software development jobs in Finland, right at your fingertips.

At MeetFrank, it’s our dream to help create a job market that is open, transparent and competitive. If there’s anything you want to know about your dream job, simply hop on over to MeetFrank and you’ll find everything you need. Check out the app here to get started.

And for recruiters, we make the recruitment process easy and stress free. Give us a call today and set up a demo to try it out.