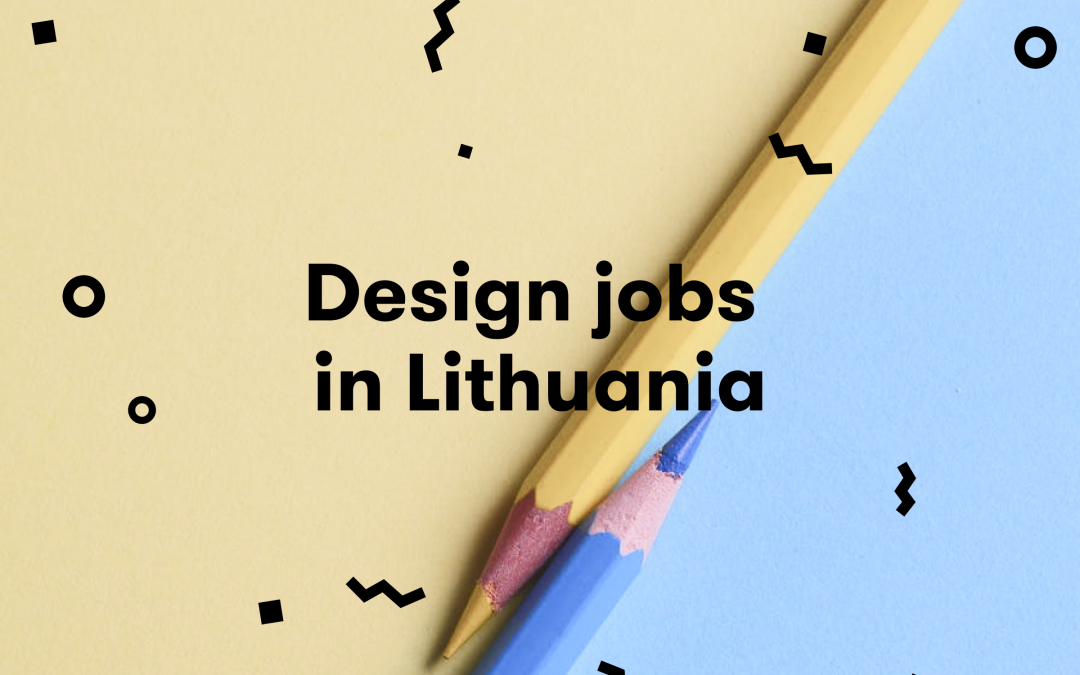 Historically, Lithuania has never had much of a design industry. In 2015, it was tagged one of the few countries in the EU that had no design policy. But all that has changed now.

The country has become far more proactive in its design ambitions and is carving out a stake for itself in the worldwide industry.

Offers on MeetFrank for designer jobs in Lithuania are increasing by the day and there are more companies looking to hire skilled designers.

Do you have what it takes to find the jobs that tick all the boxes for you? Is your company properly positioned to attract the best talents and keep them interested?

Working through data we have gleaned from offers on MeetFrank for designer jobs in Lithuania, we’ll show you all the stats you need to know.

Who do companies want to hire for designer jobs in Lithuania?

There are six general roles for which companies routinely make recruitment. These are entry, junior, mid-level, senior, lead and executive roles.

Data from MeetFrank showed that mid-level designers were in highest demand during the period between January and July 2019. There was slightly less demand for designers in senior and mid-level roles, coming in second and third respectively.

Demand for junior designers was at less than half the demand for lead designers, indicating the premium that companies put on better skills and experience. Entry roles didn’t fare any better either, drawing the least demand.

Candidates that want the best shot at getting into designer jobs they favour will need to skill up. Since there’s not such a market for entry level and junior roles, it would be helpful to obtain crucial skills so there’s a better chance to enter these roles or higher roles.

Average salaries in 2019 for designer jobs in Lithuania

For average salaries paid to designers in Lithuania for 2019, our data is tracked according to average per seniority, average per month and overall average for the period. 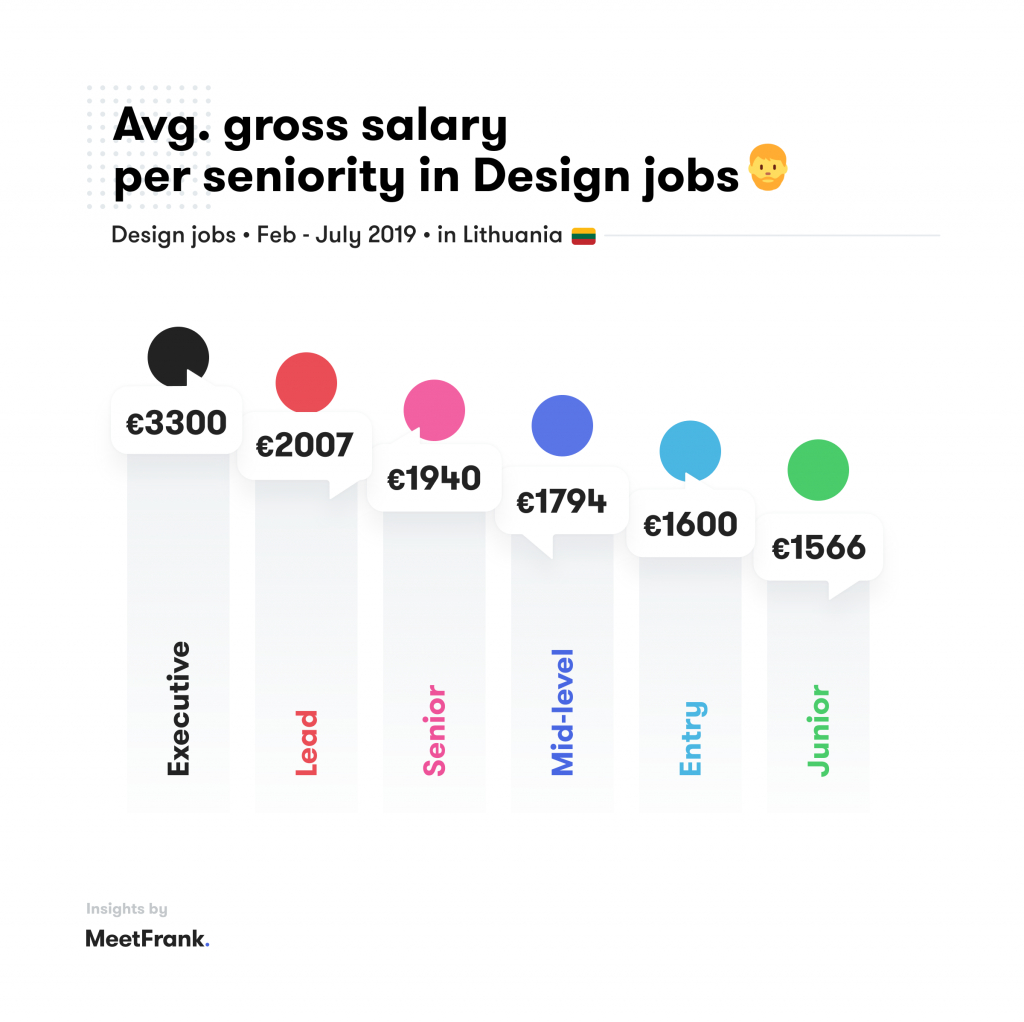 Executives were the highest paid with an average monthly salary of €3,300. They don’t earn the massive pay for nothing though. Executives are expected to provide administrative and technical leadership to design teams, not a task for the faint hearted. 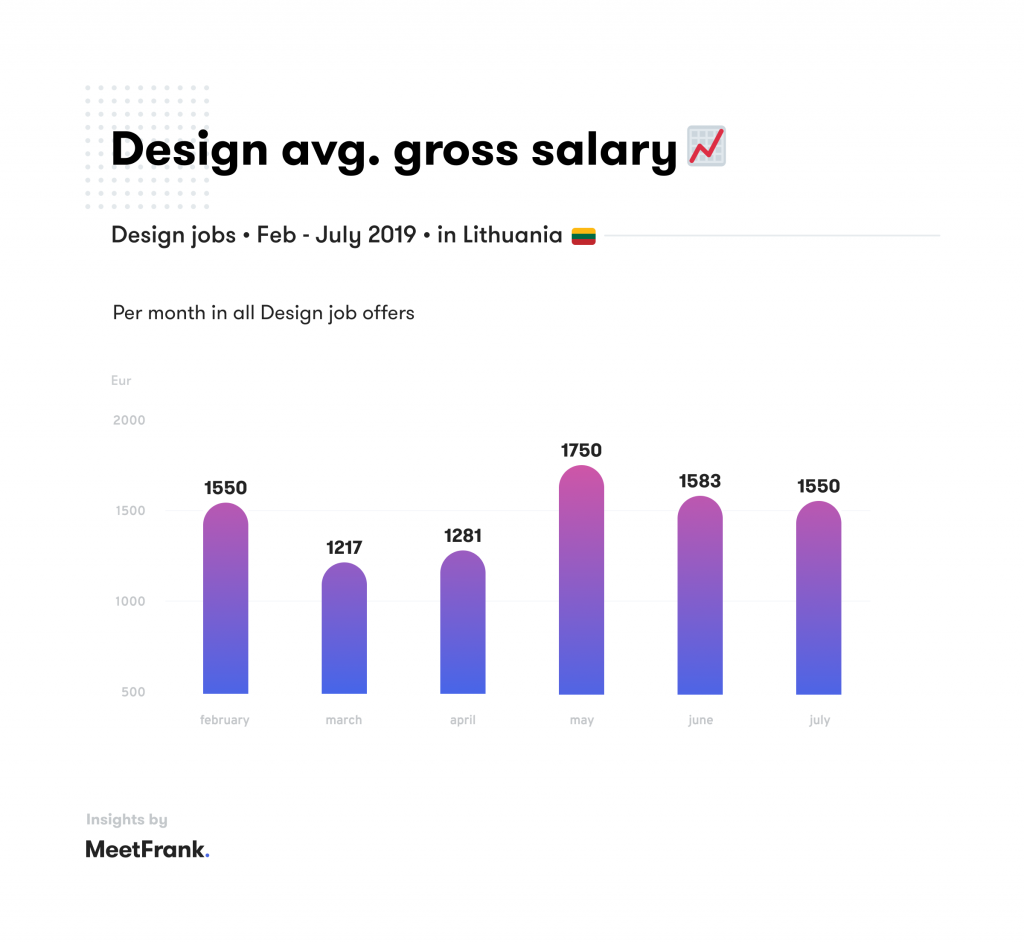 That’s why they earn the big pay. That’s also why you don’t see them being in highest demand. No one wants to build out a team made out of only €3,300-a month executives. Who’ll get the coffee?

Skills you need to stand out in the Lithuanian design industry

Out of 24 tracked skills, we collated the top 5 skills that companies required in their top candidates for designer jobs in Lithuania. Photoshop skills were the most in-demand, being required in 10% of offers.

Web / visual design was second, with 9% of the demand. The importance of this skill is clear, especially in light of stats that suggest 94% of negative website feedback is design related. Nobody likes having to browse an ugly website, and your job would be to ensure that they don’t.

Other designing skills, graphic design and UX design came in third with 8% of the demand each. 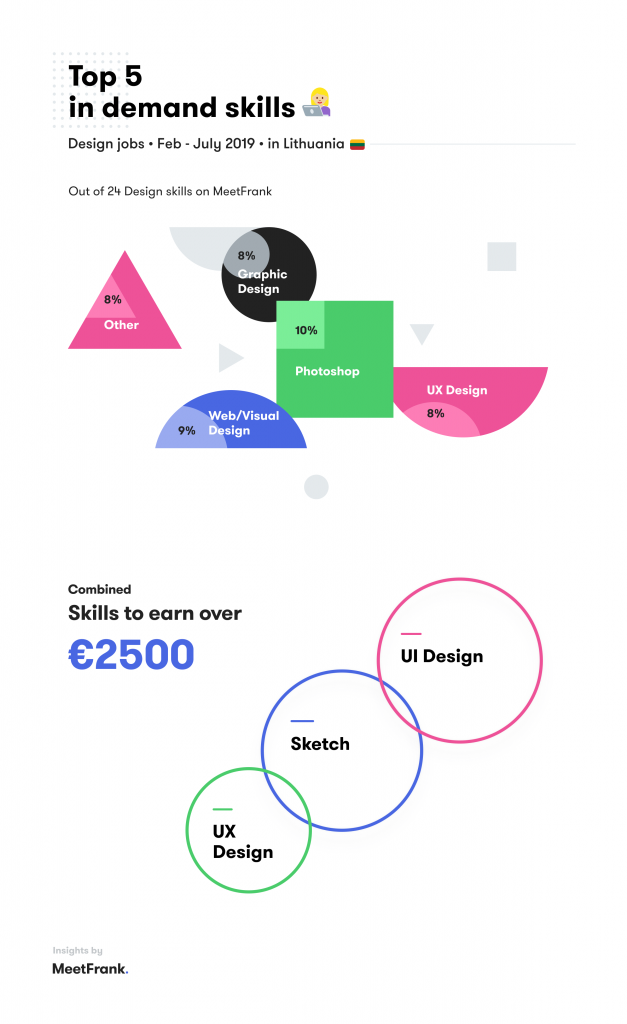 These skills are what companies consider important right now and they serve as an indicator of what skills candidates must possess to beat the odds.

What skills would help you earn more than €2,500 a month? Our data indicates that UX design, sketch and UI design skills are just the right mix to earn north of €2,500 per month.

Like much of the IT industry, the design industry is heavily dependent on skills. That’s why to be the best you can be in the industry, candidates must consistently deepen their skill set every chance they get.

MeetFrank user preferences for designer jobs in Lithuania: Where do people want to work?

The stats on designer jobs in Lithuania are not just about the companies hiring designers. On MeetFrank, talent also gets a voice in the market. We asked our users what kind of companies would tick the right boxes for them and they answered.

Most MeetFrank users in Lithuania want to work for the coolest offices, for startups and from remote locations.

Companies that fit this bill and are also looking for designers in Lithuania are Kilo.Health, TeleSoftas, Mistertango and Mediapark. 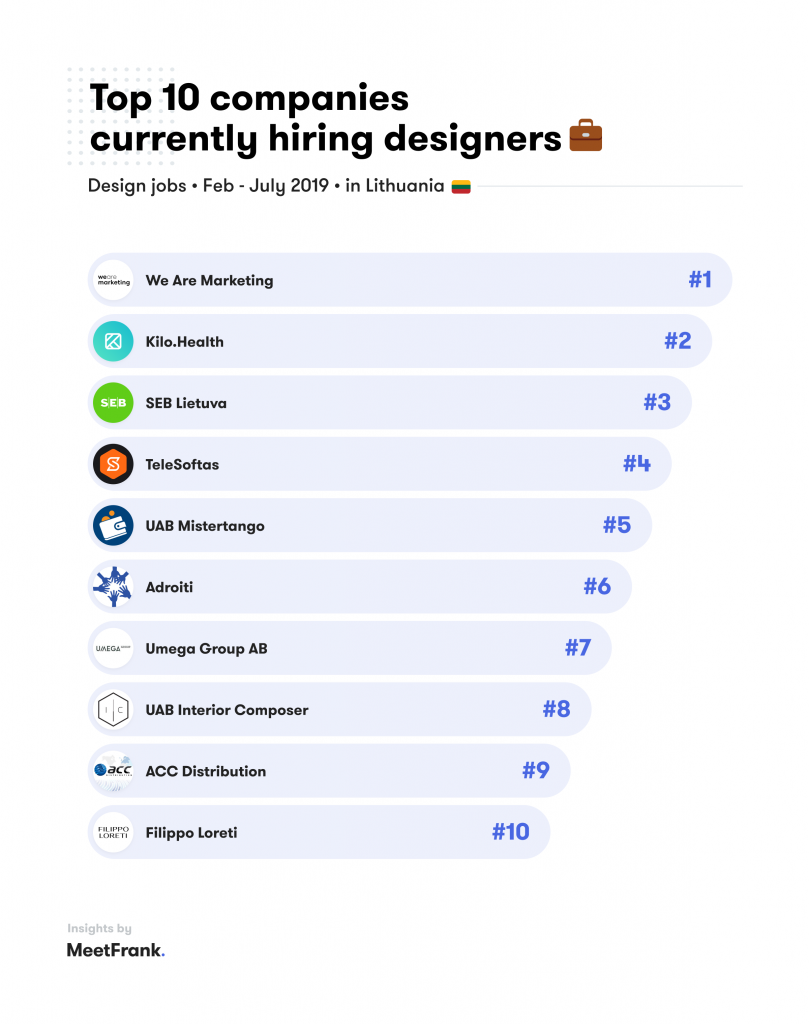 TeleSoftas is a consulting and software development company with its hands in almost every pie. It has clients in Fintech, communications, big data and a host of other sectors.

Named one of Europe’s fastest growing companies in 2019 by the Financial Times, there’s plenty to look forward to, working at TeleSoftas. Check them out on MeetFrank.

You can see everything you want to know about these companies on MeetFrank. Simply head on over here to download the app on Android or Apple stores and you’re in.

MeetFrank throws the job market open for you

MeetFrank is an app that seeks to democratise the job market. We make it easy for talent to find the companies they are interested in, and for recruiters to find the talent that suit them perfectly.

We believe that job hunting should not be stressful. Talent should be able to make informed decisions about job offers and prospective workplace with full information at hand. That’s why we made the platform for you, the talent, first.

Download our app for Android or Apple here to see what’s happening with designer jobs in Lithuania and any other jobs you are interested in.

Recruitment can often be stressful, time consuming and expensive. Hours saved on the recruitment process can be better spent on increasing productivity and growth. That’s why MeetFrank exists to help companies solve their recruitment problems. Schedule a demo here to see how MeetFrank puts the ease in recruitment.

Altogether, our employment solution combines the interests of both talent and recruiters to offer the best of both worlds. We do what we do to make life easier for you.