The Explosive Promise of IT Jobs in Lithuania 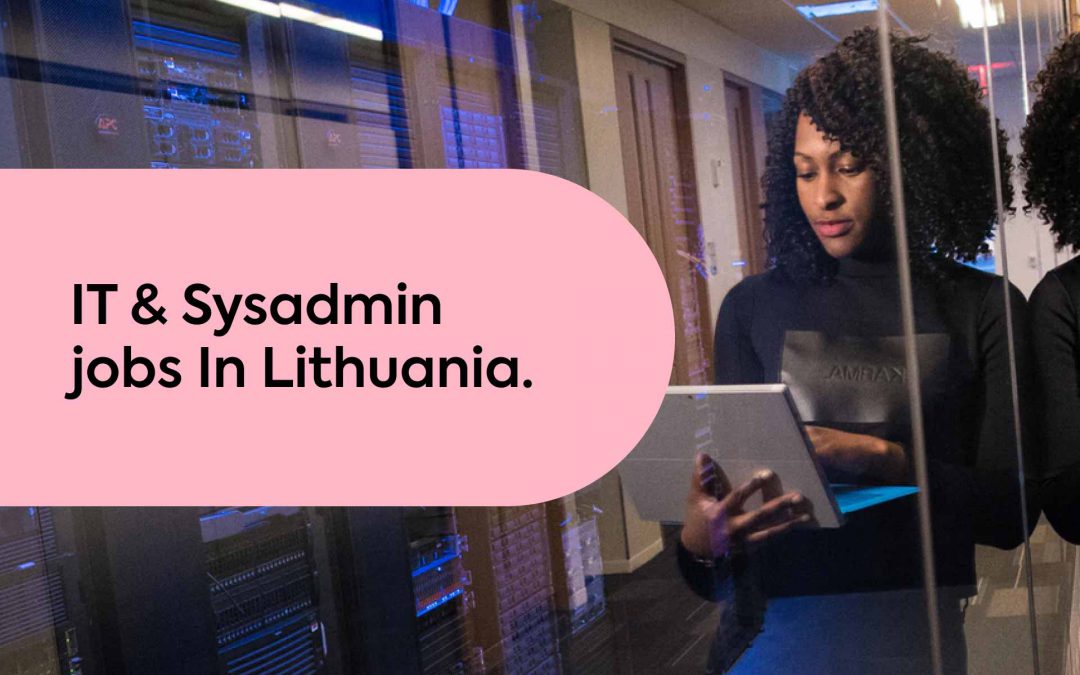 For a long while now, Lithuania has been steadily building a reputation as an incredible place to live and work. The country offers the promise of an affordable lifestyle in an environment that is cleaner, healthier and more tech savvy than most.

However, the allure of Lithuania’s serene rivers and forests is only eclipsed by the country push to become Europe’s premier hub for IT and tech. And if current reports are anything to go by, the country is fast becoming “a force in IT”.

Especially in the area of Fintech, the country has deliberately set out to create an environment that embraces and encourages technology and tech companies. In the areas of policy, legislation and funding, a lot of effort has been put into making Lithuania the IT destination of choice.

With its burgeoning reputation as one of Europe’s most exciting tech hubs, there’s no doubt that the country is succeeding. Opportunities for IT jobs in Lithuania are expanding by the day and it’s safe to say that IT talent has never had it this good in the country.

If you’re interested in the prospects for IT jobs in Lithuania, there’s a lot to look forward to. This article will go into some detail about the atmosphere for IT and systems admin jobs in Lithuania as well as the hiring trends and preferences for these jobs.

Drawing on data culled from MeetFrank, we’ll explain all you need to know about earning potential for IT jobs in Lithuania and the skills you need to succeed.

Lithuania is becoming a force in IT

The Lithuanian government, like its Estonian counterpart, made a conscious decision to invest in IT some 20 years ago. It quickly established certain wins, such as becoming the city with the fastest public Wi-Fi in the world and with the 3rd most affordable internet in Europe.

But the country didn’t stop there. It decided to invest heavily in its IT talent, aiming to encourage a multi-lingual pool of highly talented and educated IT talent. The end result of that investment now is a pool of over 31,500 IT professionals, with up to 2,000 graduating yearly.

The country’s talent has English proficiency of 85% and was ranked 13th in the world for IT skills in 2017. Bloomberg also ranked the country as the 8th best in the world for percentage of graduates enrolled in higher education.

The concerted drive towards creating an IT advantage has led to intense interest from some of the largest companies in the world. As at 2017, the country hosted 13 of the 20 largest IT companies in the Baltic region. It is currently home to tech giants such as Google, IBM, Wix, Uber, Unity, Revolut and a host of others.

All the data points to incredible success in Lithuania’s IT drive, and only within a few short years. The country was ranked 1st in the world in fulfilling business needs for ICT and in 2018, it was ranked 16th out of 191 countries, on the Doing Business Index.

In recent times, the country has put even more effort into setting itself up as a Mecca for Fintech companies, and it is succeeding here as well. As at 2017, it was reported that a total of 117 Fintech firms were operating in Lithuania, a rapid increase from the 45 companies reported in 2013.

By creating a regulatory sandbox and government policy that favours the creation of Fintech startups, Lithuania has put itself in a position to benefit handsomely from companies that want to hedge on Brexit.

IT jobs in Lithuania are growing in leaps and bounds

The extremely positive outlook towards IT companies in Lithuania is creating a ripple effect on IT jobs in the country. As more Fintech startups are being born in the country and as more IT giants establish operations in Lithuania, there is greater demand for IT professionals to fill crucial roles.

Unsurprisingly, MeetFrank data found that offers for IT jobs in Lithuania grew by 45% between January and July 2019, compared to the second half of 2018. With more companies hiring on MeetFrank, there are even more opportunities for talent to find the jobs that tick the right boxes.

Hiring trends for the first half of 2019 indicated that there was greater demand for mid-level IT and systems admin professionals, over other roles. Offers for seniors came in second, with the least offers going to candidates in lead, junior and entry roles, respectively. 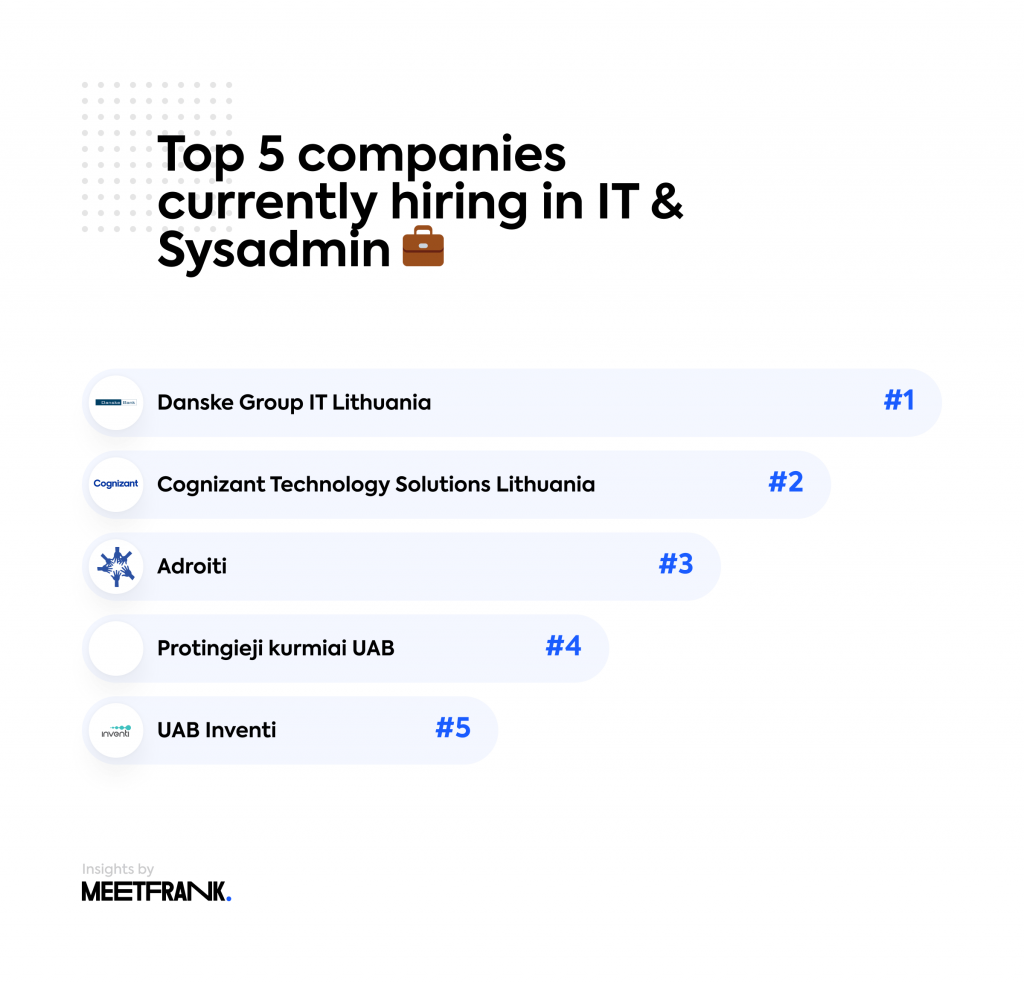 The companies that have been most active in hiring for IT and systems admin experts, according to our list of top 10 most active companies include Adroiti and Baip. Others are Danske Group IT Lithuania, Cognizant Technology Solutions Lithuania, Protingieji kurmiai UAB, UAB Inventi, Franmax UAB, UAB DPD LIETUVA, Telia Lietuvoje and Avia Solutions Group (CY) PLC. 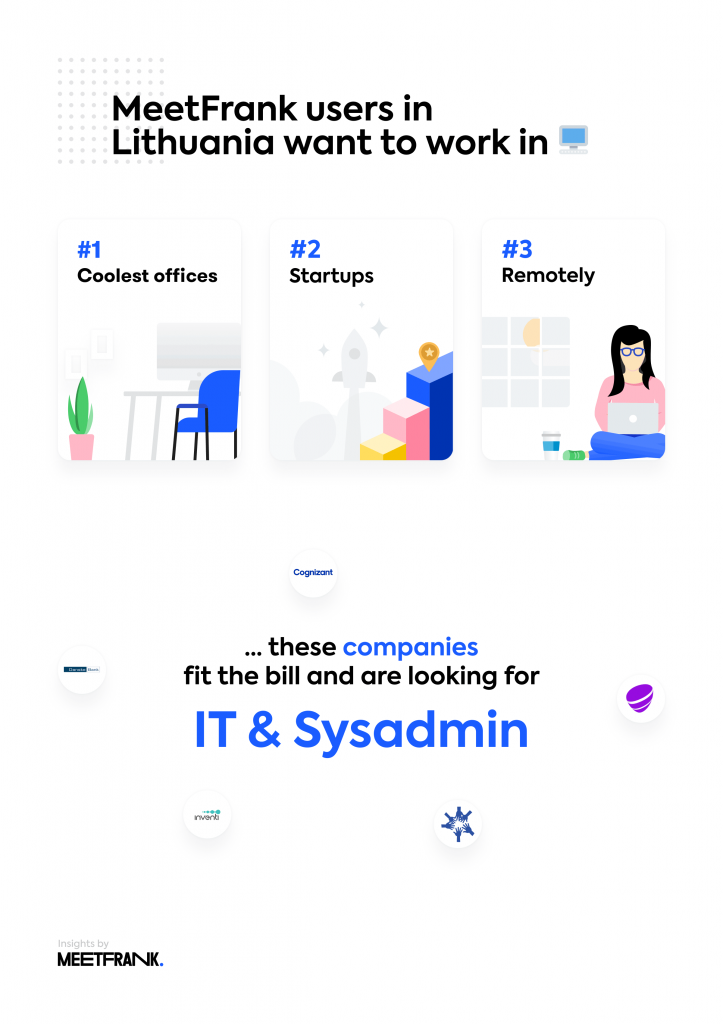 Where do IT and systems admin professionals on MeetFrank want to work? According to our data, preferences are spread across the Coolest Offices, Startups and companies offering Remote work. Those companies that fit the bill and that are also hiring for IT jobs in Lithuania include Adroiti and Telia.

Average salaries for IT jobs in Lithuania

From MeetFrank data, average minimum salaries for the first half of 2019 were €1,238 while the average maximum was €2,397. The highest salary offered during the period was €4,000. 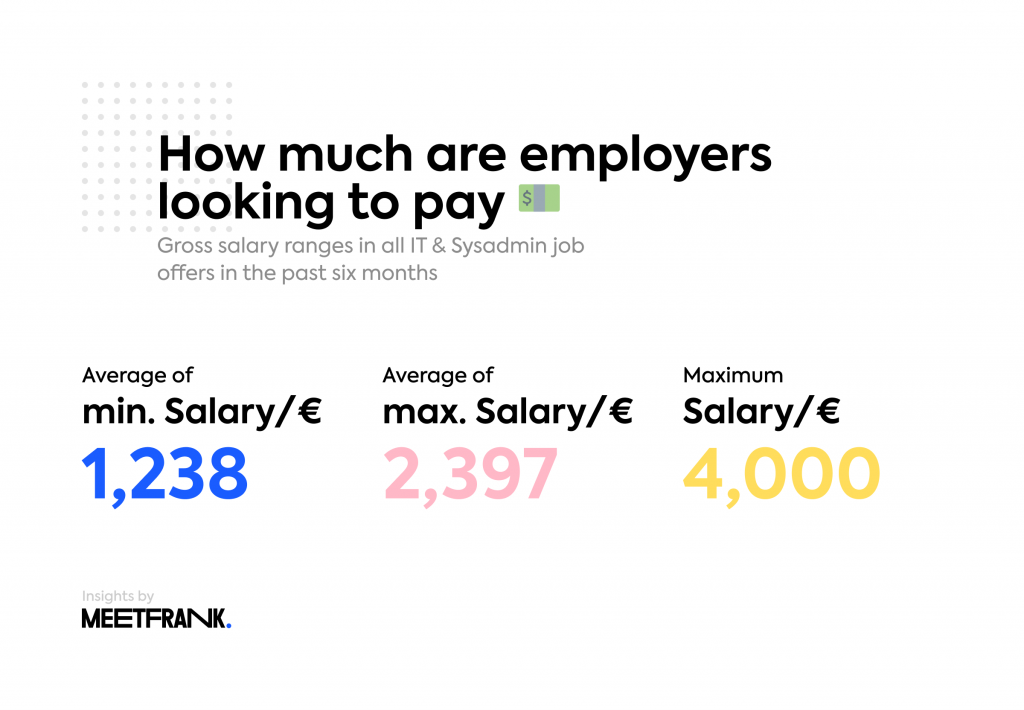 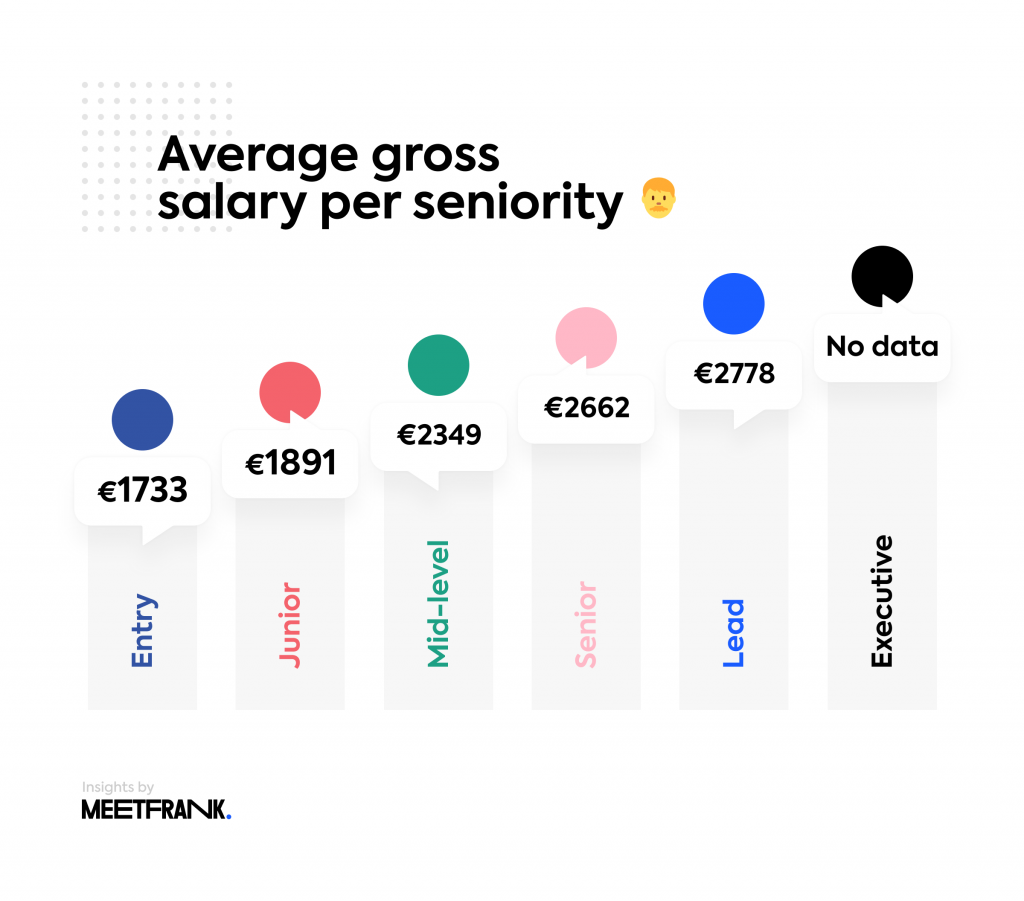 Candidates occupying lead roles were the highest earners during the period, taking home an average monthly salary of €2,778. 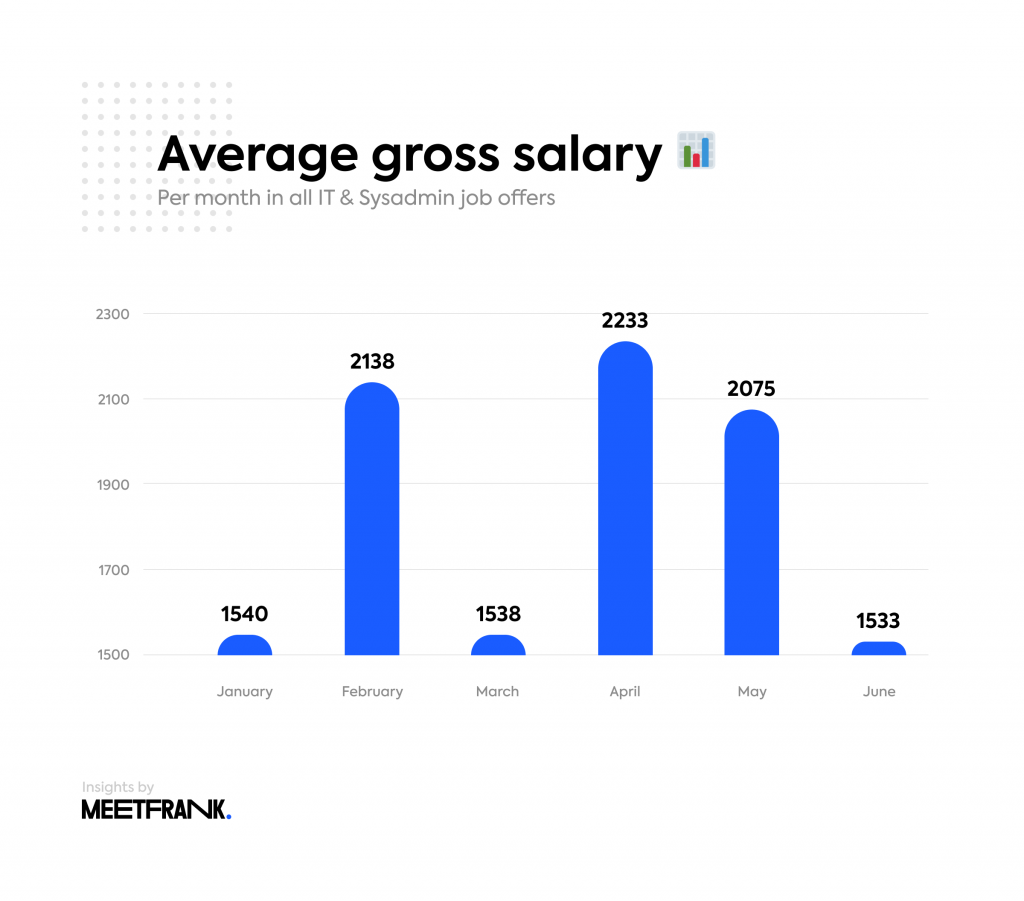 Top 5 skills for success in IT jobs in Lithuania

Out of 35 tracked skills required for IT jobs in Lithuania, we tracked the top 5 in-demand skills. Systems Administration was the most in-demand skill, being required in 9% of job offers during the period. 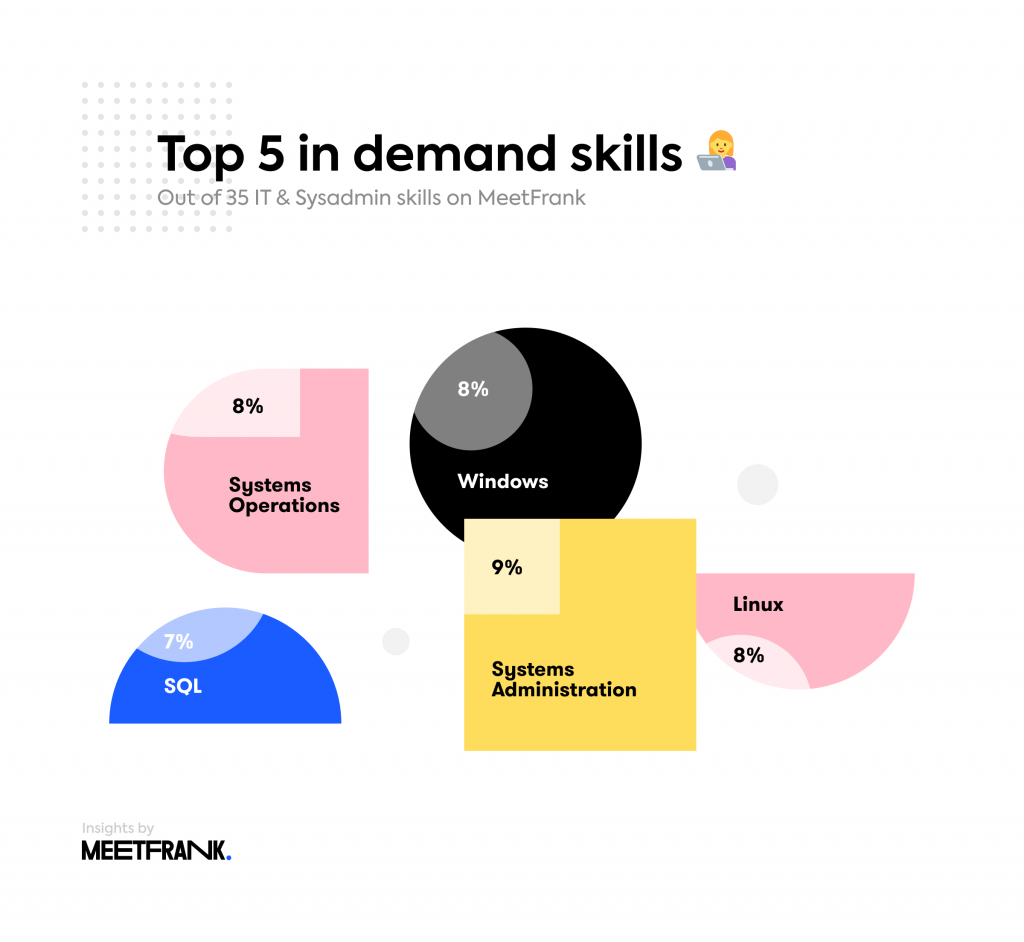 Linux, Windows and Systems Operations were joint second, being required in 8% of offers respectively. SQL completed the top 5, required in 7% of the total job offers on the platform.

For talent that intend to set a higher earning ceiling, what skills do you need to possess to earn higher than most? According to MeetFrank data, you need competencies in Systems Administration, Systems Operations and SQL to earn more than €2,500 a month. 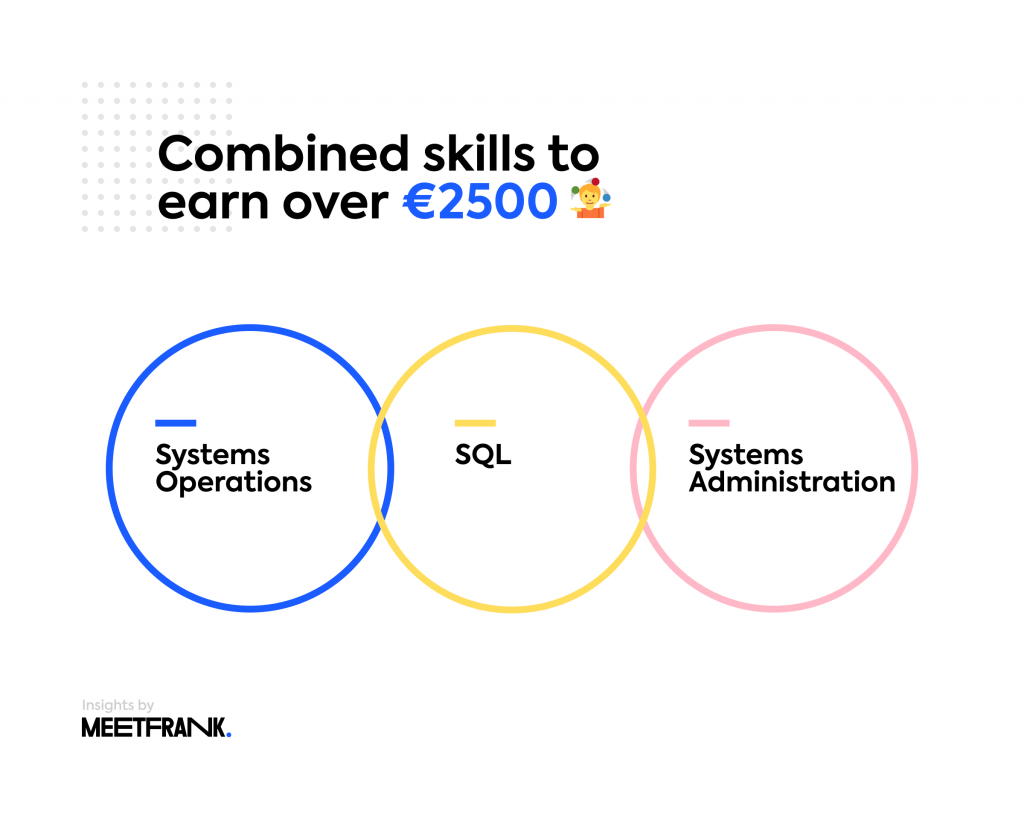 Make your mark with MeetFrank

MeetFrank was created to help democratise the job market. We help talent find the necessary information they need to make the best decisions possible on their hiring opportunities for IT jobs in Lithuania.

If there’s any company or position you’re interested in, you’ll find all the information you want to know on MeetFrank. To get started, all you need do is download the app for Apple or Android today.

And for recruiters, MeetFrank makes life easy by connecting companies with talent that ticks all the boxes for them. If you’d like to know more, get in touch with us to see how MeetFrank makes recruitment easy.