What is Trending for The Best Designer Jobs in Finland? 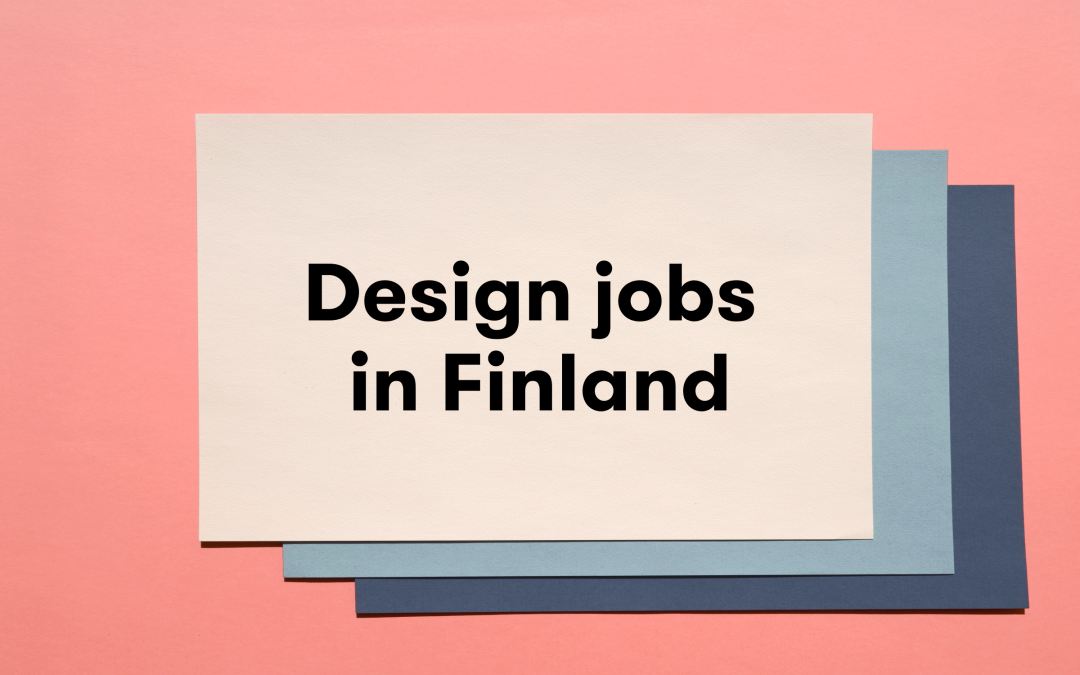 When Finland’s impact is mentioned on the world stage, three things stand out: design, video gaming and some more design.

For a country that describes itself as “the design nation” (not ‘a’, mind you, ‘the’), you would hardly expect different. Its citizens are perfectly design conscious and their work simply oozes taste, creativity and that little spark that makes a true classic.

You should probably riot if we didn’t tell you that designer jobs in Finland are among the best in the world. The market is a mix of some of the most disruptive design companies in the industry, fueled by some of the most talented designers around.

And lucky for you, we have all the stats that’ll help you understand the market for designer jobs in Finland right here.

To hear the Finnish tell it, design runs in the blood of the country and its citizens. Finnish design has become the stuff of lore, having been internationally promoted since 1875.

The country prides itself on being on a “first name basis with design”. No wonder it is considered the world’s design capital. That’s an actual title by the way. Finland literally holds the title of world design capital. 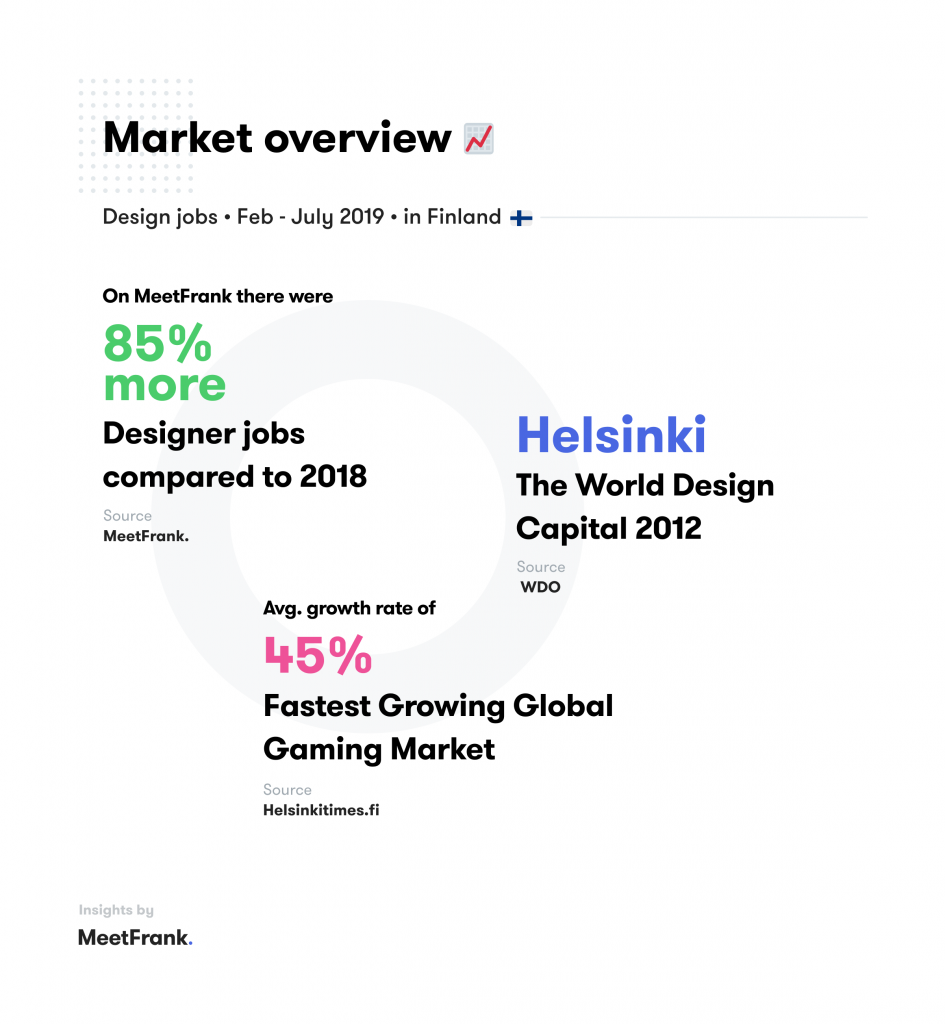 In 2012, Helsinki was recognized as World Design Capital, a designation awarded to recognize cities that use design as a resource for social, financial and cultural development.

The country’s stellar design culture spreads to everything, from its commercial art and fashion, to graphic design and its IT industry.

Its illustration, digital environments and corporate identities are strong and renowned worldwide. Contributing to a $14 billion IT industry, they showcase a recognition of the fact that a product is only as good as its finish.

This is one of the reasons why Finland’s gaming industry is a hub for the best of the best. The country is rated as one of the best places in the world to be a game designer. Popular hits developed in the country include worldwide favourites Angry Birds, Clash of Clans and Max Payne.

The industry has risen to become one of the most valuable in the world, with a turnover of €2.5 billion in 2016, roughly 7% of the global revenue. Wouldn’t you want a piece of that?

Designers and developers all over the world have their eyes set on Finland. With expected salaries between €50,000 to €80,000 a year, who wouldn’t?

Data on offers for designer jobs in Finland made on MeetFrank also indicates that there were 85% more offers in the first 6 months of 2019, as against July to December 2018.

Quite simply, offers on MeetFrank for designer jobs in Finland are exploding and there’s no better place to be at the moment.

2019 trends for designer jobs in Finland: Where can you find the jobs?

Recently, there has been a lot of recruitment activity for designer jobs in Finland. Several companies have set out to find the most talented designers around and attract them.

The top ten most active companies currently hiring designers in Finland include BON Games, Visma, Surrogate Games and G-Works. It should have been expected that gaming companies would be amongst the top ten. 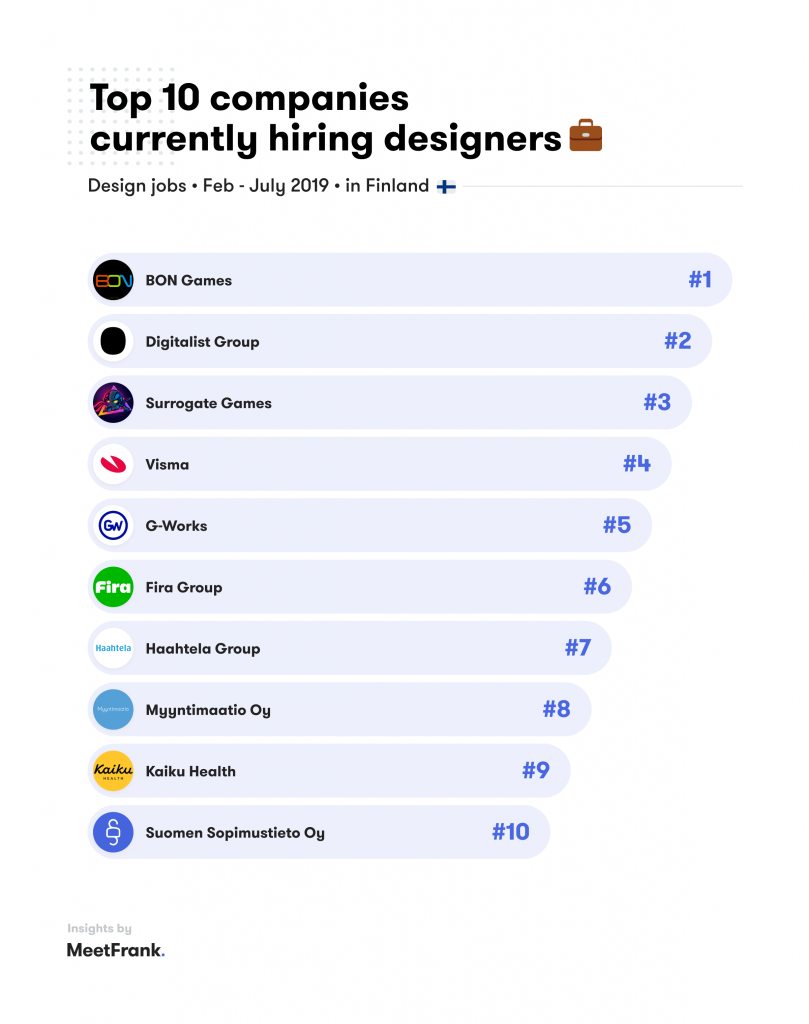 Who are these companies looking to hire? Mostly senior designers, as our data on offers per seniority shows. The most offers made on the platform between January and July 2019 were made to senior designers.

Offers for mid-level and lead designers were very close, with the former just edging out to second place. The least offers were made to entry level designers and executives, although the demand for junior level designers was reasonable.

It’s not all in the hands of design companies though, as MeetFrank users in Finland also have their preferences. Most of our Finnish users want to work for a startup, in the Fintech and in the next big thing.

BON Games fits every definition of startup you’ll find. Launched in 2017, the company is passionate about old-school tycoon and business simulation games. It published its first game, Transit King Tycoon, in 2018 and the game has since become a worldwide sensation. The company is young, agile and growing fast. Check them out on MeetFrank. 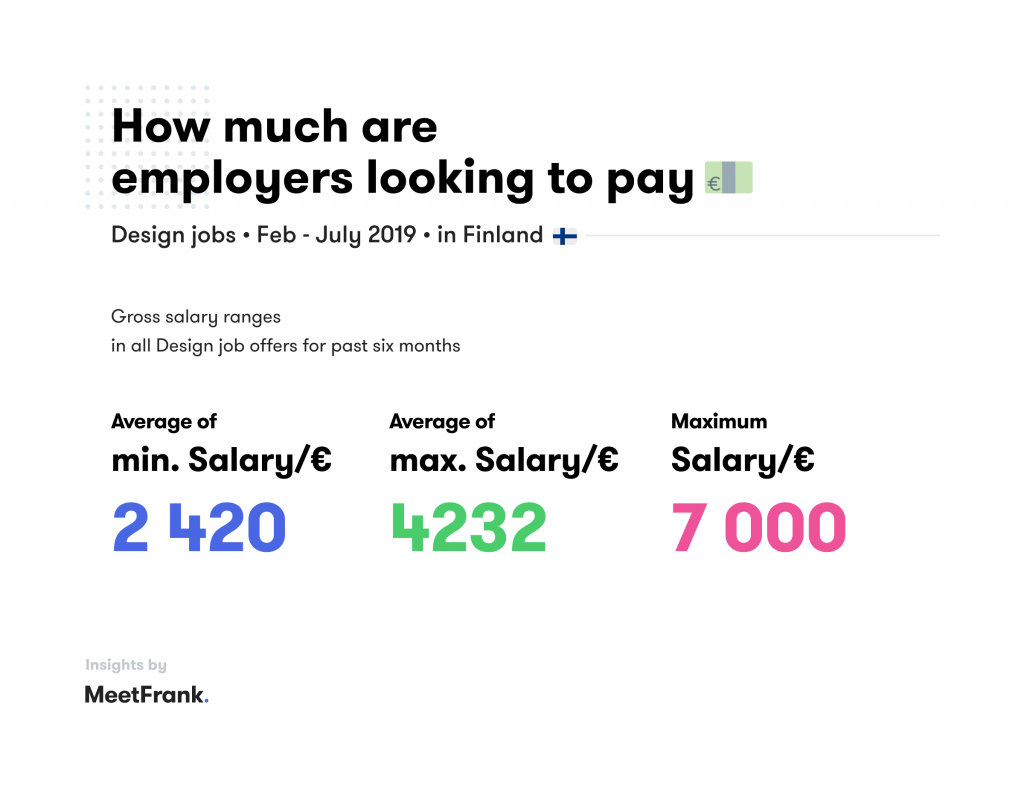 You’ll be glad to find that designer jobs in Finland pay quite a bit. MeetFrank data on average salaries indicates that the overall average monthly minimum earned in 2019 was €2,420, while the average maximum was €4,232.

The total highest salary offered on the platform during the period was €7,000. Quite a payday eh? 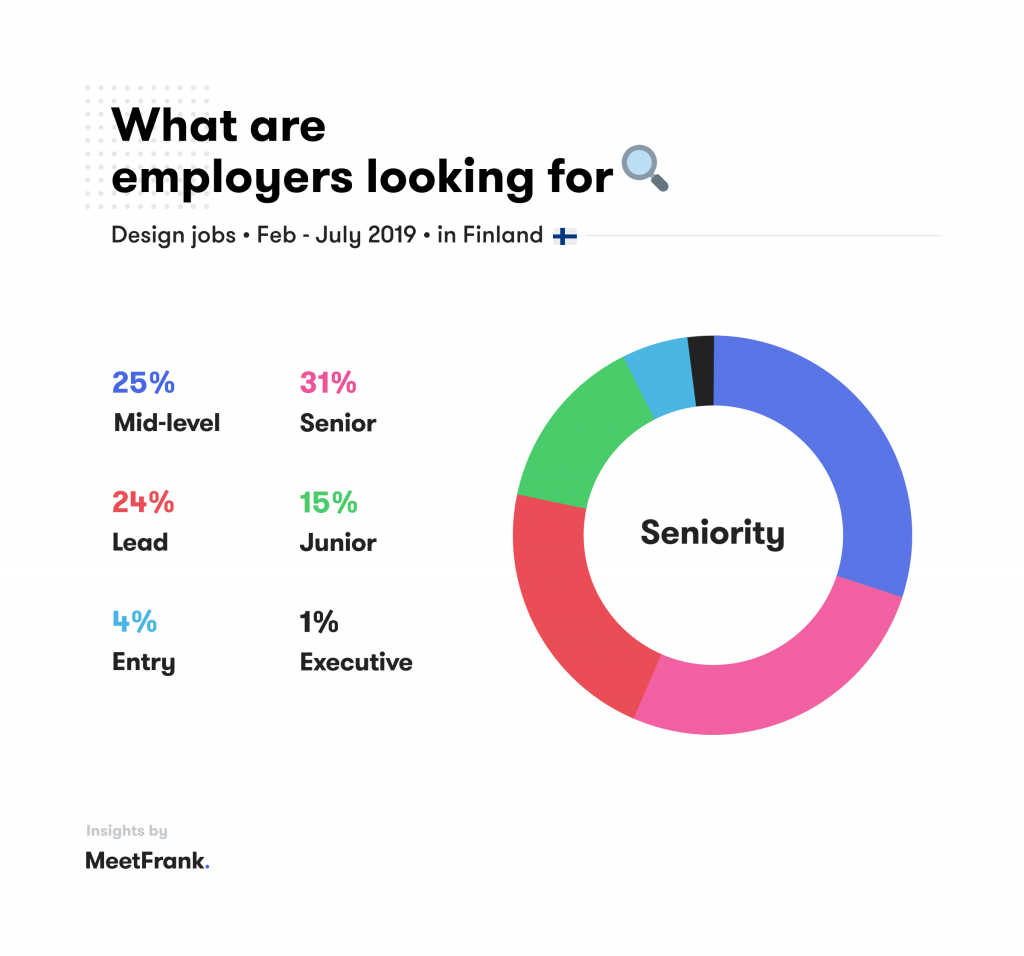 Senior level designers were the highest paid during the period, commanding average figures of €4,400 per month. This is consistent with the high demand for senior developers between January to July 2019.

Lead designers earned slightly lower at €4,388 on average and mid-level designers came up third with €3,961.

Brand new entry level candidates in the market for designer jobs in Finland, earned a monthly average of €2,650. Not a bad start at all. The experience gap between entry and junior designers showed however, as juniors were paid €3,720 on average, more than €1,000 higher than entry level designers. 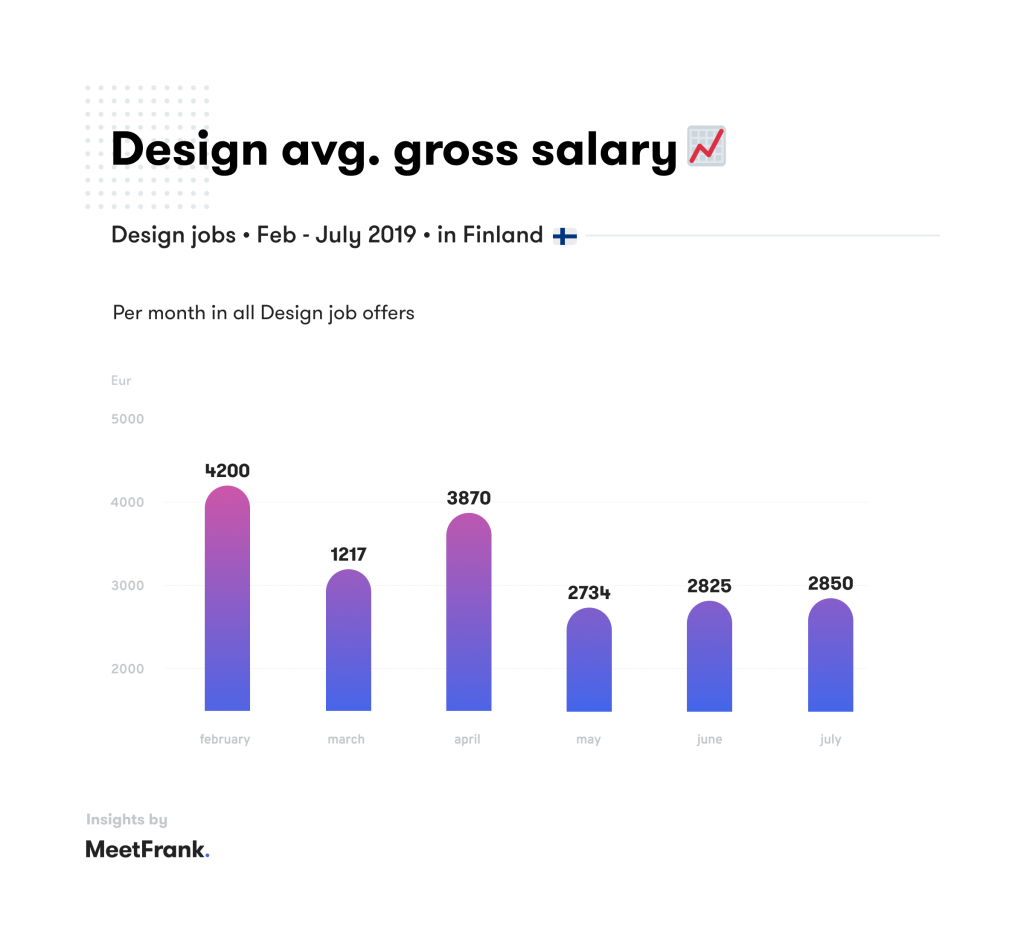 Our data on average salaries per month showed that January to July 2019 was really positive for designer jobs in Finland.

Average salaries ranged between €2,700 and 4,200 during the period and the average dropped below €3,000 on only three occasions. Those were only in the summer months. This is symptomatic of the usual lull experienced in recruitment activities during summer.

Skills you need to get ahead

You need really good skills to do well in the designer jobs market. That’s because you’ll often be all that stands between an idea that works and one that people love.

Take websites for instance. 75% of people form their opinion about a website based on its aesthetics, not what’s on it. That means no matter how useful the info on the website is, precious few people would be bothered to stick around if it’s not eye candy as well. 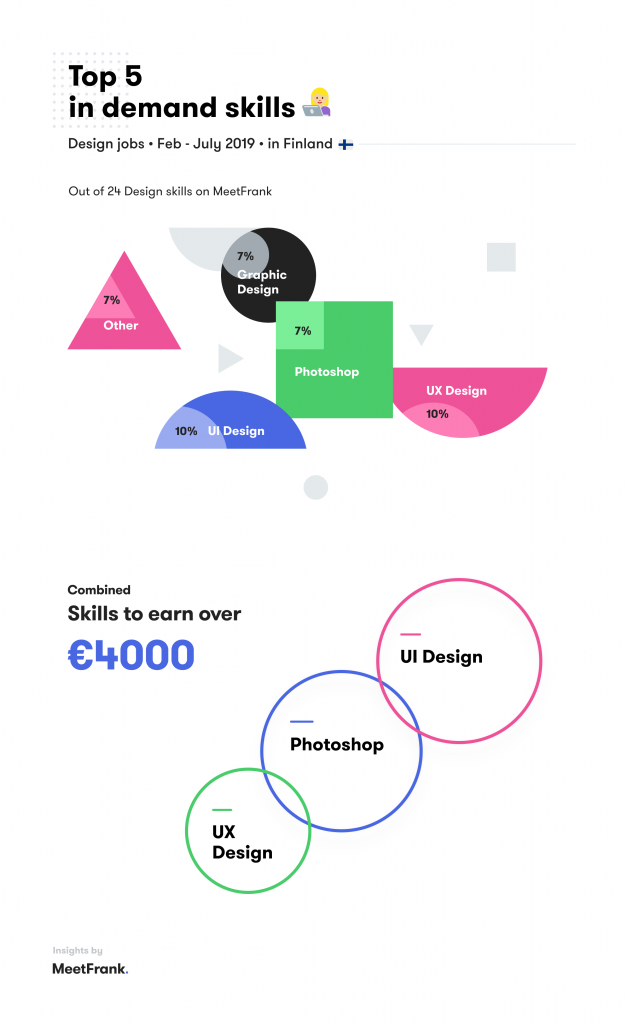 Companies hiring for designer jobs in Finland also want their customers to stick around. That’s why UI and UX design, at 10% each, were the joint most in-demand skills for job offers on MeetFrank.

Companies want their brands to interact better with customers and they want to improve user experience while they’re at it.

The other skills that make up the top 5 in-demand skills were graphic design, Photoshop and other designing skills, at 7% each.

To increase your chances of getting the best job possible and earning higher than €4,000, you need a combination of UI design, UX design and Photoshop skills. Essentially, you need 27% of the top skills for designer jobs in Finland. No pressure.

MeetFrank is an app that provides transparent data on all the stats that talent and recruiters need to make the best decisions. Our platform lets you keep tabs on all the trends close to your heart, and then some.

We do what we do because we love it when people love their job. That’s why we make life easier for recruiters and help talent find their passion. Check out our app here on Android and Apple stores or schedule a demo with us (if you’re a recruiter) to see how MeetFrank works.