Why Data Science Jobs in Estonia are Hotter than Ever

For a country that shaves 844 years of working time off its government processes for every year of operation, Estonia is operating light years ahead of its peers. If this wasn’t evident to you before, then that should drive home the point.

Everywhere you turn in the country, there’s one more evidence of why Estonia is considered the world’s most digitally enabled society. With its comprehensive focus on digital services and startups operating on the cutting edge of ICT, a specialty in information technology will set you amongst the top percentile in the Estonia’s labour industry.

And just like most other countries, the more we learn about how data can change the world, the more important data science jobs in Estonia get.

If you have the skills, experience or interest to function in data science jobs in Estonia, you’ll likely want to know what they’re all about. The opportunities, trends and projections for growth.

Luckily, that’s our business here at MeetFrank. With insights drawn from job offers on our employment platform, we’ll explain all you need to know about why data science jobs in Estonia are currently smouldering hot.

Why are data science jobs in Estonia all the rage?

Ever since the concepts of big data and analytics gained ground on the international scene, data science has been a discipline in vogue. With the increasing capacity to mine and exploit data granted by ever-improving computing power, data science has gained in significance.

But the increasing significance is even more personal for Estonia. When you consider the central role that AI and digital capabilities play in the country’s public and private spheres, that’s hardly surprising.

Estonia is a country that has AI deeply embedded in its social fabric. The country has practically taken on AI as its own area of comparative advantage and data is central to how that advantage shapes up in the near future.

The country has identified the potential of data-fuelled AI to help solve the challenges posed by its small population and economy. Its efforts into further AI development are accelerating, and with the government set to launch more than 50 AI applications by 2020 things are definitely heating up.

Estonia’s well-known unicorns and its early-stage startups are looking to data science and machine learning to maximise their product delivery.

The government itself is working hard to invest more in data science. As from 2020, the University of Tartu, alongside the Estonian Ministry of Economic Affairs and Communication, will be opening a new Master’s programme in data science.

With the country’s ability to harness a wide range of data due to its digital capabilities, data scientists are becoming even more critical to help exploit that data.

The new breed of Estonian trained data scientists, coupled with the country’s data gathering capabilities, will place Estonia firmly at the forefront of the 4th industrial revolution. But until then, talent interested in data science jobs in Estonia will have their pick of available jobs.

Really, the list of companies hiring data scientists in Estonia is populated by the who’s who of the Estonia and Baltic corporate scene. These companies paid the most attention to mid-level data science professionals, followed by senior talent.

Regular Estonian giants such as Telia Estonia and Eesti Energia lead the list, along with some very interesting data-powered startups.

Starship Technologies is one of the more exciting of these. The AI startup built the world’s first package delivery robot with the aim of cracking the logistics and deliveries industry. Perfect for last-mile delivery, Starship robots are capable of carrying items within a 3km radius.

The startup is intensely data reliant though. In a bid to make its robots as safe and autonomous as possible, it feeds the devices large amounts of data that lets them understand and predict the human environment. They built a software that processes input from cameras, radar and other sensors to drive decisions in real time in order to achieve this.

Another popular purveyor of data science jobs in Estonia is Monese, one of the most popular and trusted banking services in Europe. The company uses AI mostly to ensure the safety of its customers.

In order to protect them against financial fraud and minimize the risk of illegal transactions, the company has invested in intelligent computer systems. These systems analyze customer profile data, transaction sequences and social connections to predict financial risk and fraud. Nifty eh?

As a professional working in these data science jobs, you would have your pick of the most technologically advanced startups and established companies in Estonia. That’s saying a lot for a country recognised as the world’s most digitally advanced society. 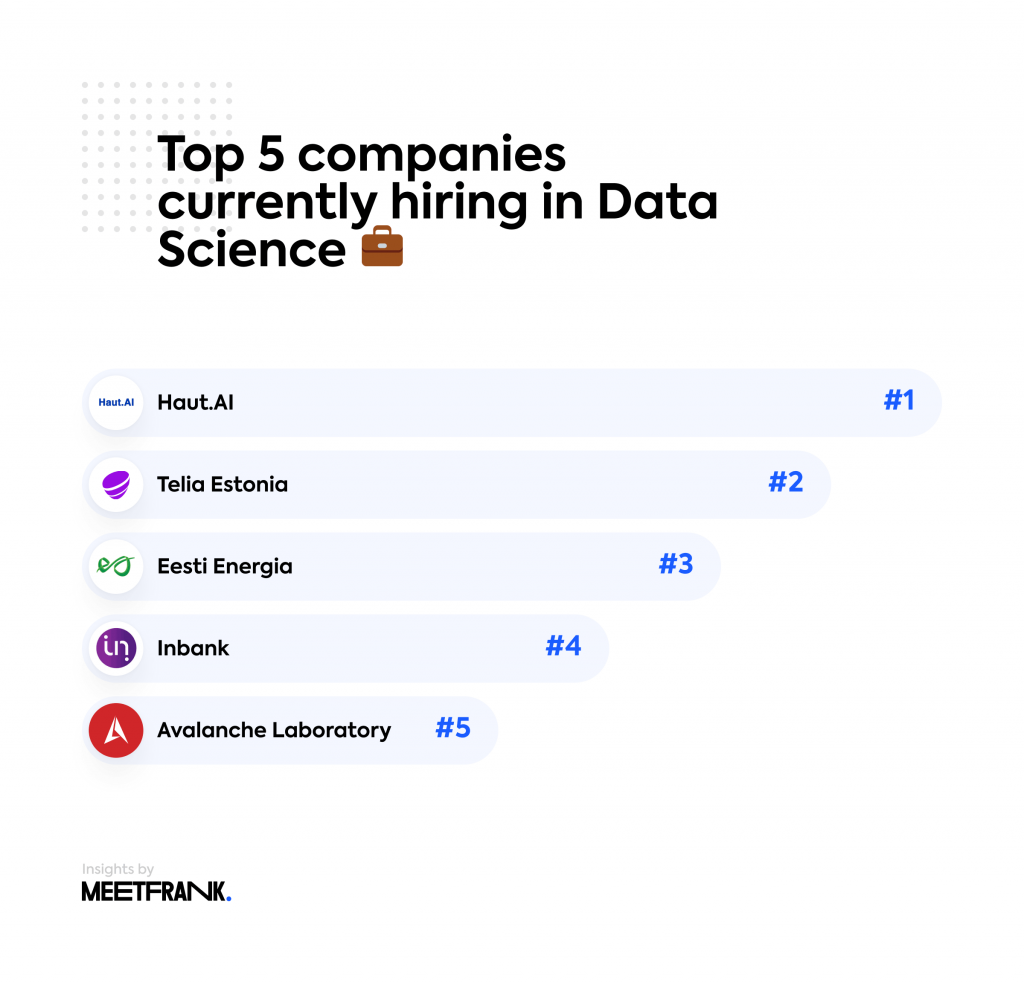 The companies that make up the top ten currently hiring for data science jobs in Estonia include Haut.AI, Telia Estonia, and Eesti Energia. Others are Inbank, Avalanche Laboratory OÜ, Softwerk OÜ, Bigbank, Alliance for Recruitment, TEHIK and your friendly neighbourhood MeetFrank.

Our MeetFrank users in Estonia also have their preferences for data science jobs in Estonia. According to our data, most users want to work for startups, in Fintech and from remote locations jobs. 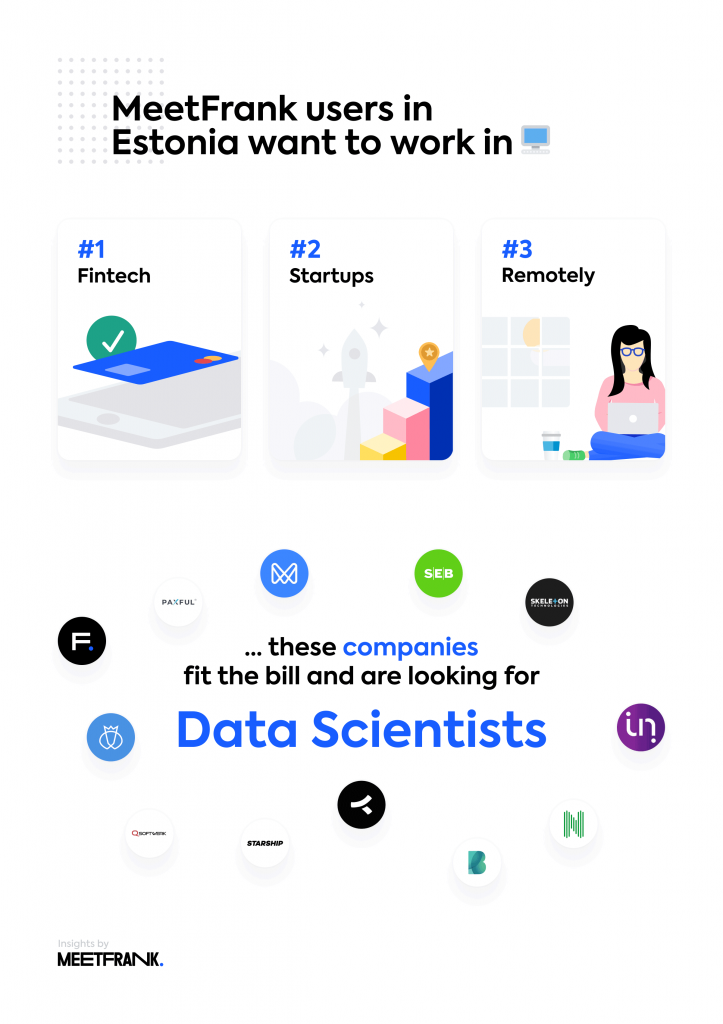 How much are companies in Estonia paying for data science jobs?

Our data on average salaries for data science jobs in the first half 2019 indicates that average minimum salaries were €1,496. The average maximum was €3,049 while the highest salary offer received was €5,000. 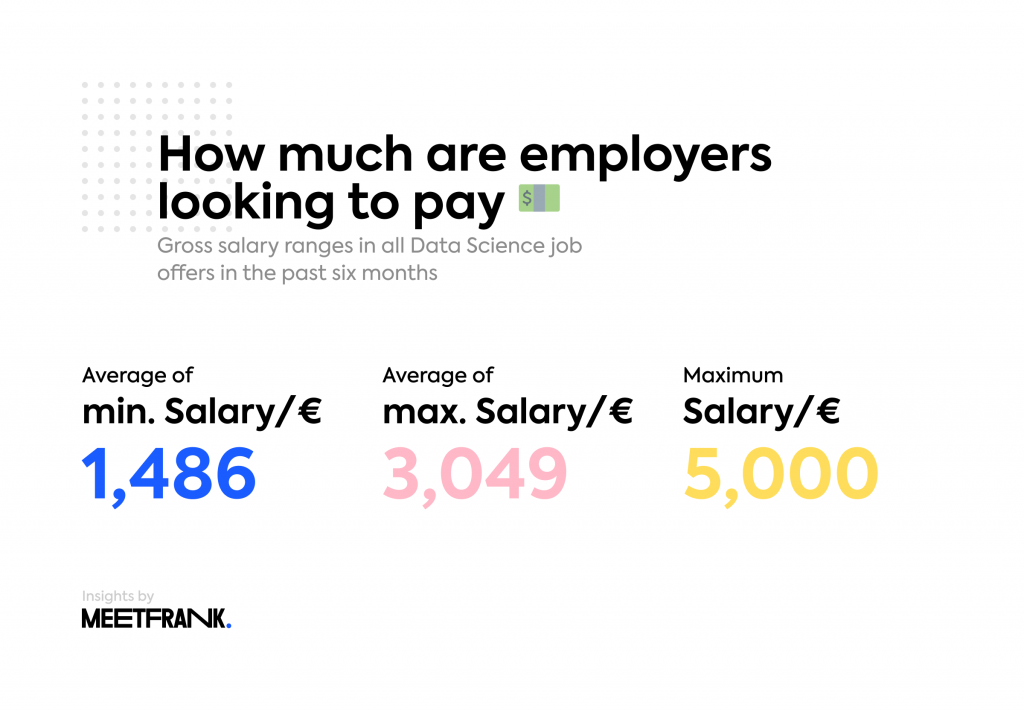 Professionals in executive roles earned the most during the period, as can be expected, with an average monthly pay of €4,100. Entry candidates started out at a tidy €2,390 while mid-level professionals earned much higher with an average pay of €3,123 per month. 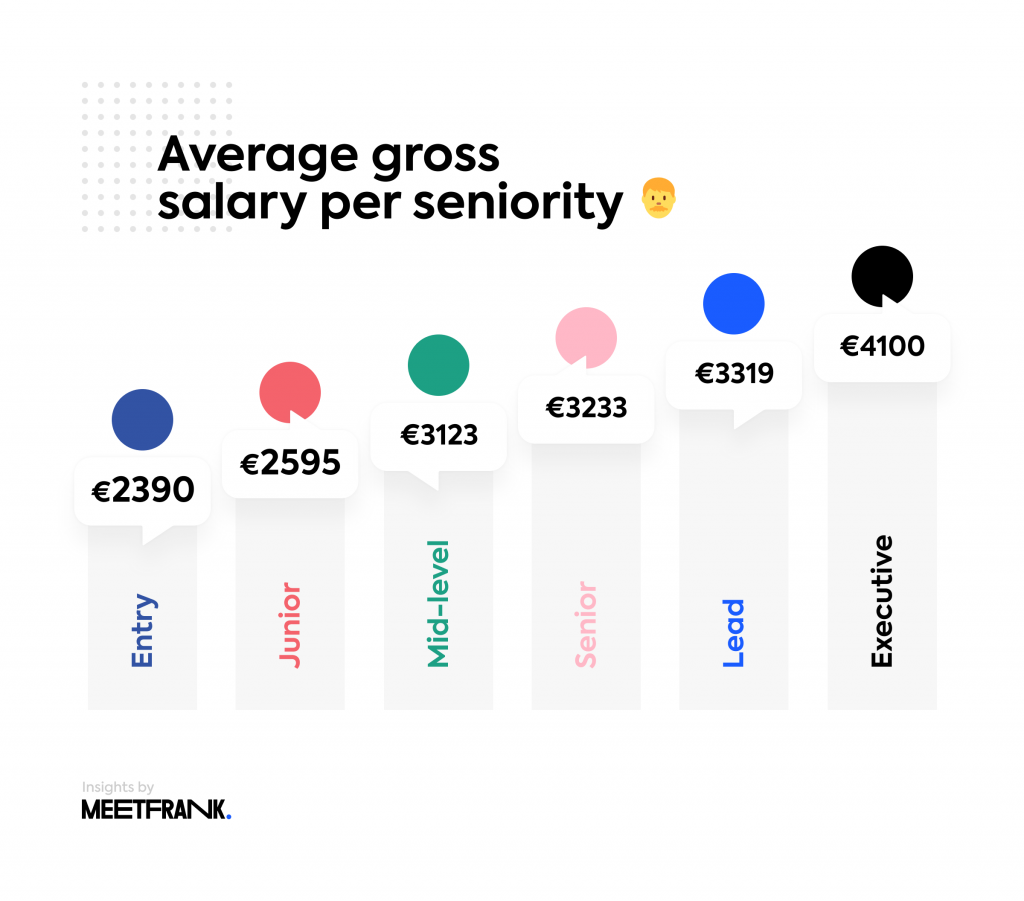 Our data on averages from month to month showed that the highest average salaries per month were €3,350, recorded in February. The lowest was €1,893, recorded in July 2019.

Smash your earning ceiling with a skills upgrade 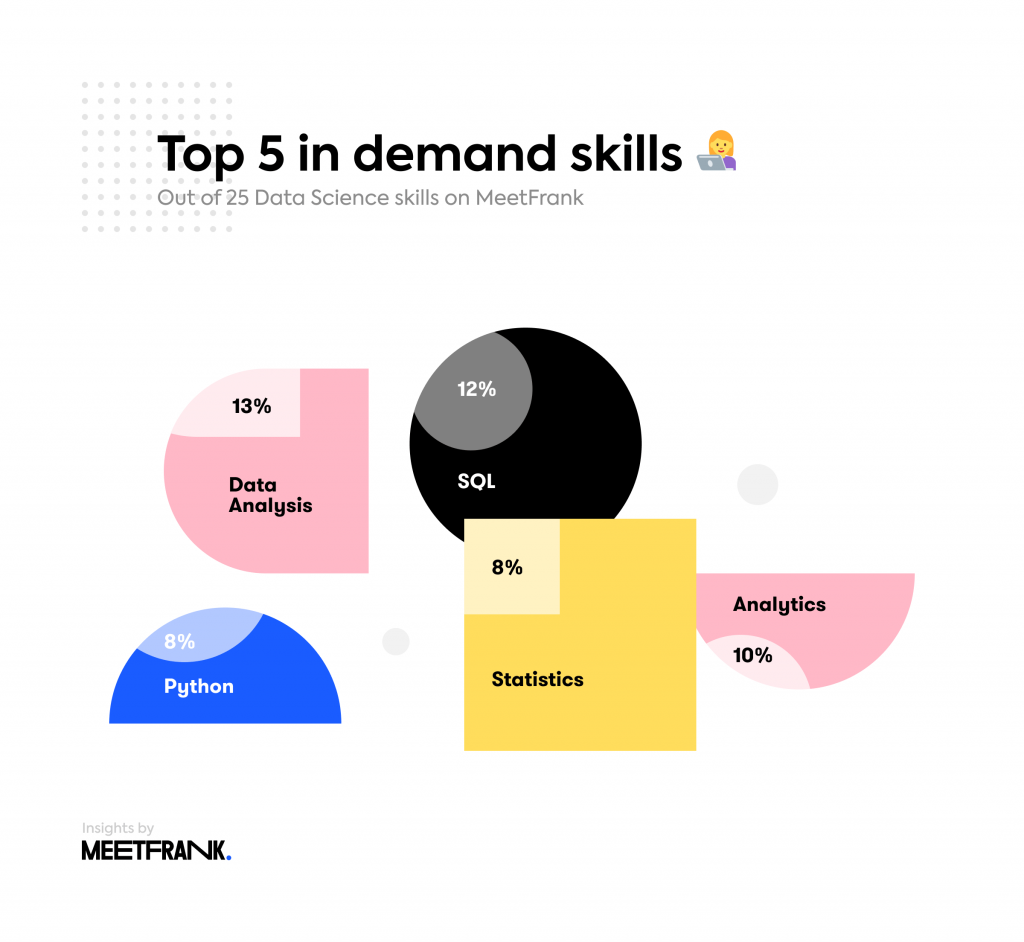 Analytics, Python and Statistics made up the rest of the top five, being required in 10%, 8% and 8% of offers respectively.

For data scientists that have their sights set on earning very well, as they should, we tracked the combined skills needed to earn that high. According to MeetFrank data, Analytics, Data Analysis and SQL were the best combination of skills to earn pretty well. 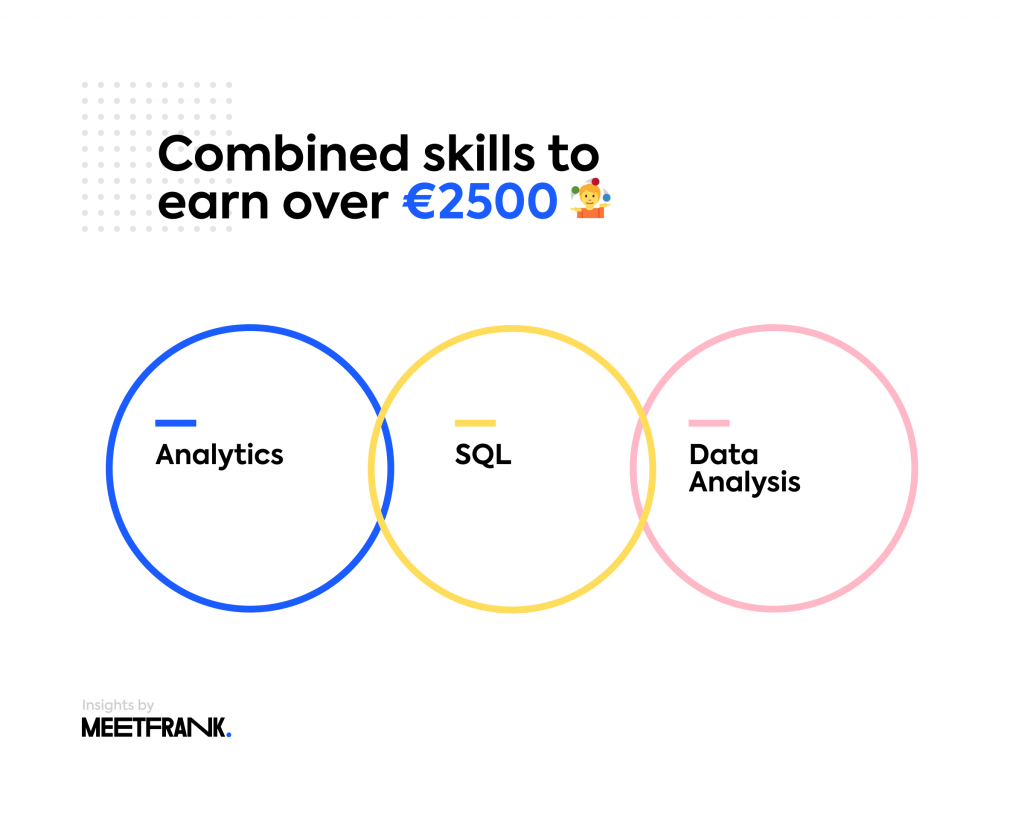 Regardless of whether you are a candidate looking for the best data science jobs in Estonia, or a recruiter looking for top talent, MeetFrank can make things easier for you.

We provide data and insights that lets talent find the companies that want to hire them, and we help recruiters find the talent that makes sense for them.

Try out the MeetFrank app for Apple or Android if you’re looking to get into these jobs or give us a call to see how MeetFrank works if you’re a recruiter.