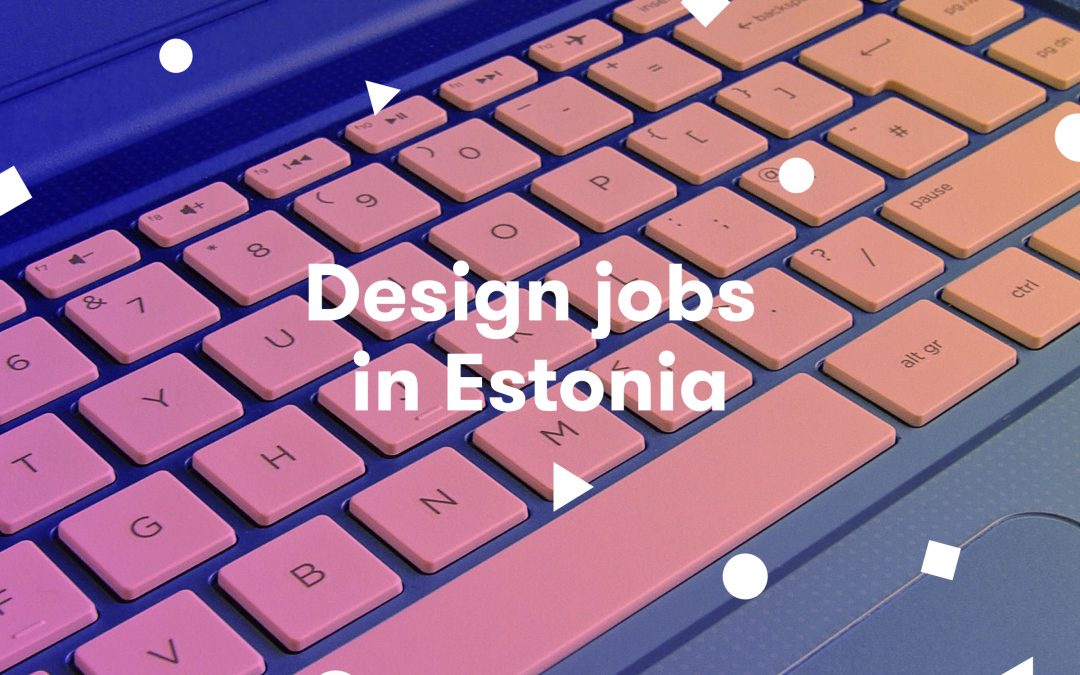 You can probably find worse ways to spend your career than in designer jobs in Estonia.

No matter where you are in the world or what part of the digital economy you occupy, there’s one fact that’s a constant: nobody will enjoy what you’ve built if it’s not appealing. This is why designer jobs in Estonia are the in thing.

Add to that the fact that Estonia is considered the most advanced digital society in the world, according to Wired, and you probably will never find a better spot for design jobs than Estonia.

If you’re looking to get in on these jobs, we have the stats and data that’ll warm your heart. Drawing on data for January to July 2019 sourced from MeetFrank, we’ll explain why designers in Estonia are amongst the highest paid in the country and other stats you need to know.

Better than average salary for workers in Estonia’s signature industry 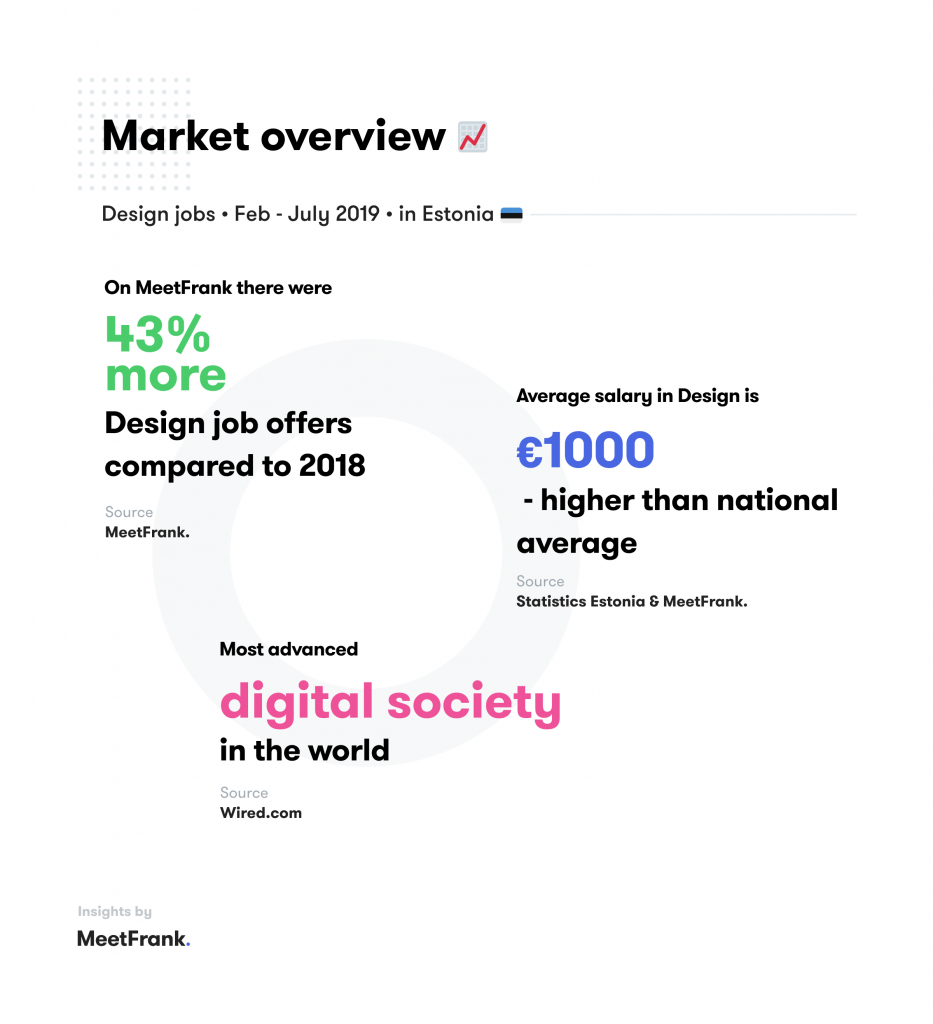 Estonia is a country founded on the digital economy. Agile, futuristic and incredibly modern, the country has adopted IT and R&D as a national policy and is blazing the trail in Europe.

Estonia’s digital capabilities have developed incredibly, such that they are now among its biggest exports. More than 130 countries around the world have adapted its solutions to one degree or another, creating an industry worth more than €3.6 billion.

It is fair to say that Estonia’s IT sector has become its signature industry. Designers occupy an important place in this sector. When you consider the crucial part they play in making IT solutions interactive and attractive for consumers, it’s not hard to see why.

It takes users only 0.05 seconds to form an opinion about a website. To put that into context, consider that humans blink at least once every 4 seconds. How long does a blink last? Only 1/10 of a second. It takes half that time for a user to decide whether they like what they’re seeing. That’s why the first look they get has to be perfect.

Workers in Estonia’s IT and designing sector are amongst the highest paid in the country. Official data from Statistics Estonia indicates that average salaries in the country were €1,419, as at the 2nd quarter of 2019.

For the IT sector though, that figure was €2,390 per month. Almost double the national average, and the highest during the quarter. Working off data collated from offers made on our employment platform, MeetFrank, we found similar statistics for designer jobs in Estonia. 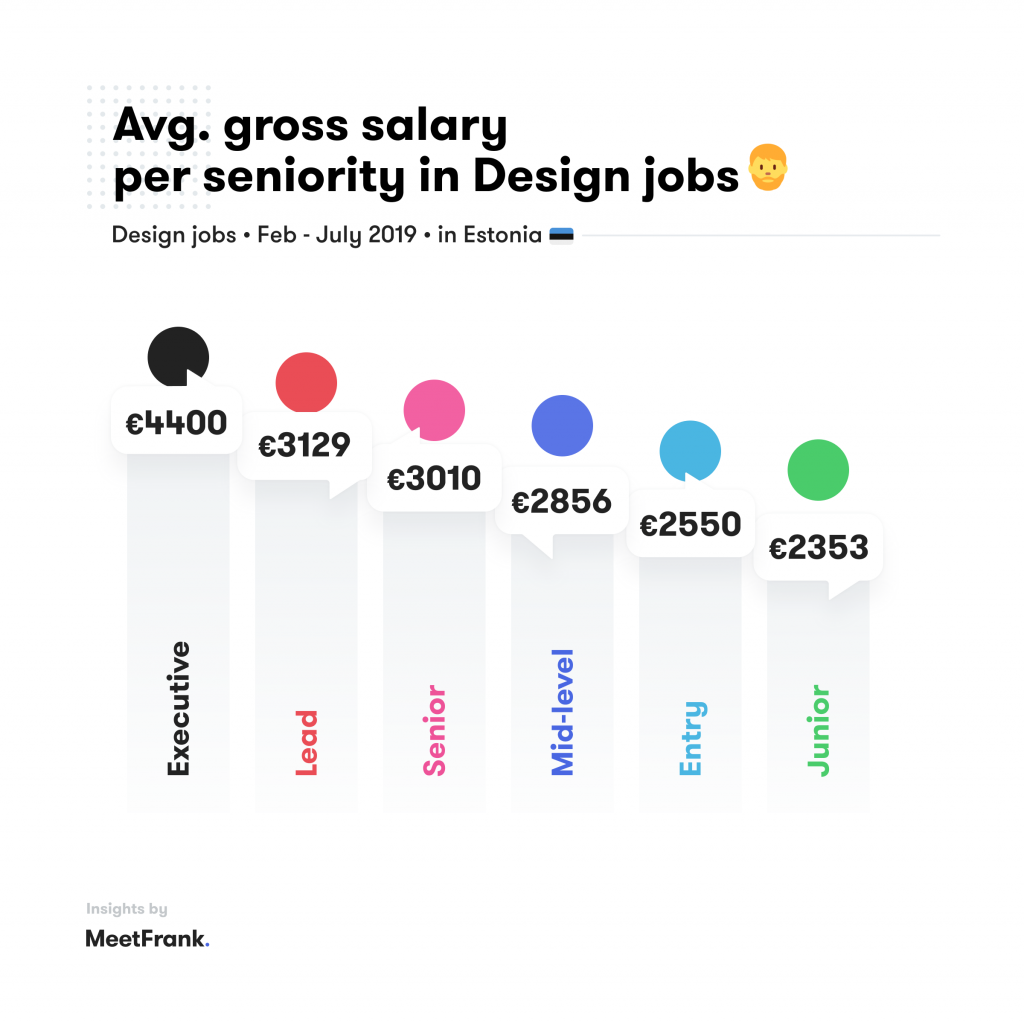 For instance, on average salaries per seniority, we found that entry level designers earned an average monthly salary of €2,550. For employees on the lowest rung of designer jobs in Estonia, that’s not a bad start at all. 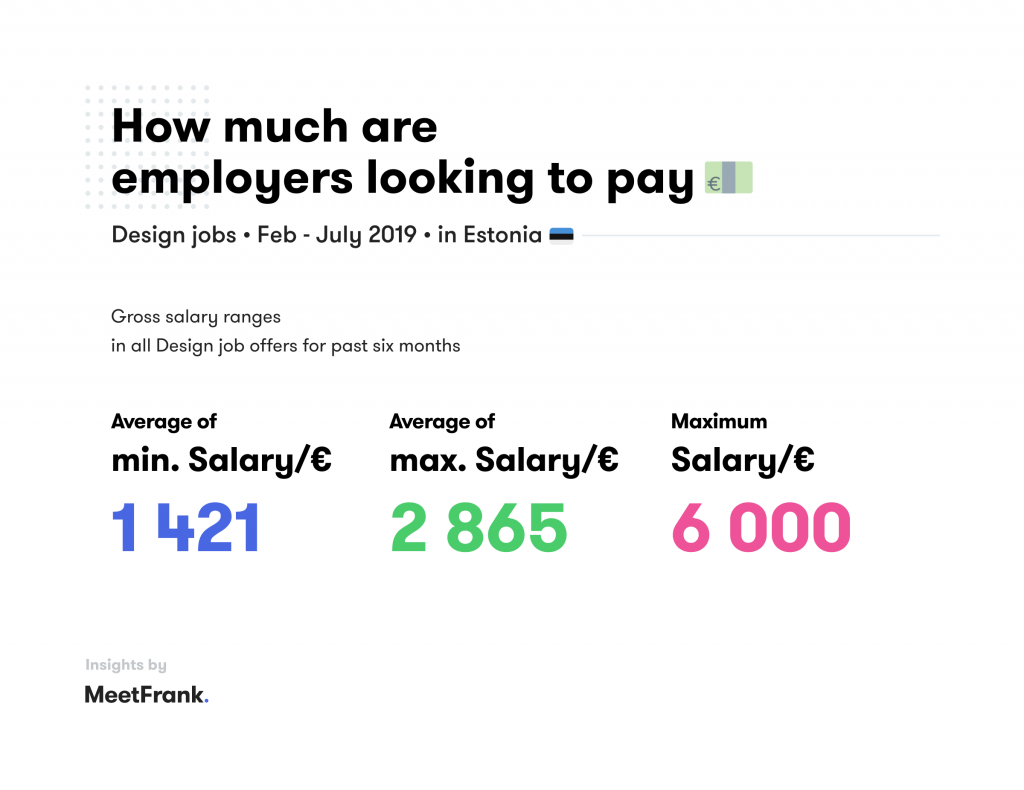 Our data showed the average of minimum salaries was €1,421 (basically national average), while the average maximum was €2,856. The highest salary recorded on the platform during the period was €6,000.

Although the average salaries recorded per month from January to July fluctuated a bit, they held steady between €1,500 and €2,600, confirming that web designing in Estonia brings in at least above average salary.

Designer jobs in Estonia: What are the skills you need to stand out?

Designers are superstars in the field of IT. Due to the role they play in simplifying and beautifying tech/digital solutions, their work is invaluable.

Imagine for a moment how the world of tech and the digital economy would look without designers. This webpage would probably be just a monochrome page with no pictures and only shades of black and white. All the text would appear in one solid block and you’ll probably need to see an optician by the time you’re done.

Your iPhone would weigh two pounds, come in a thick rectangle with no rounded edges and a voice assistant that speaks like R2D2 from Star Wars (no Siri because, what’s a Siri?).

Everything that a designer does helps make tech exciting, fresh and quite simply fun. That’s why you need a healthy dose of creativity and the right skills to justify the great pay you’ll be getting on designer jobs in Estonia. 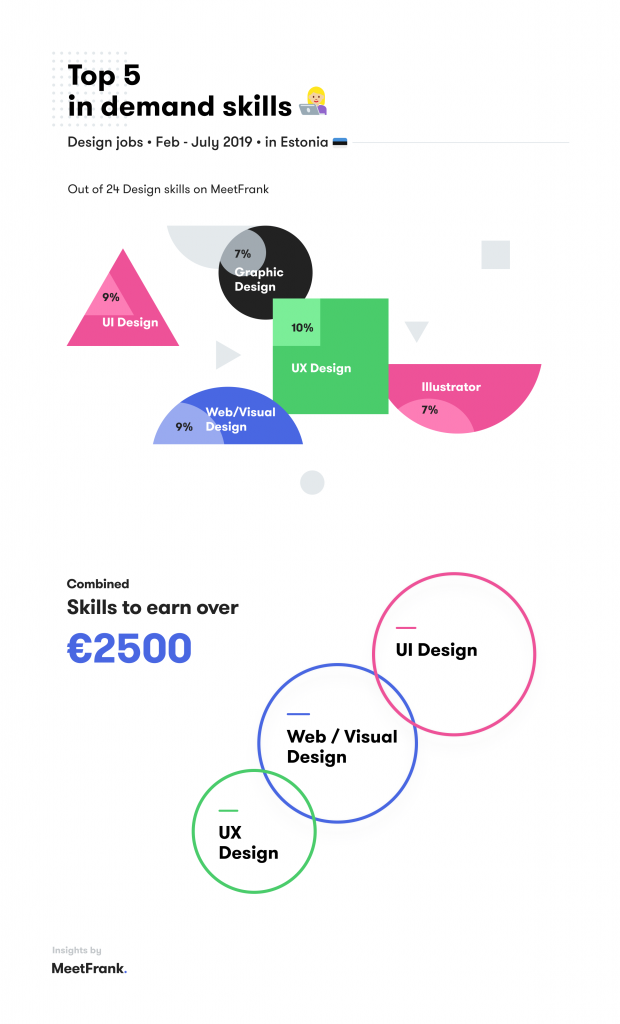 From 24 tracked skills, we collated the top 5 skills that employers demand in their hotshot designers. UX design was the hottest skill in the Estonian market during the period, with 10% of the demand.

UI design and web/visual design were joint second, being required 9% of the time respectively. Graphic design and illustrator skills each took up 7% of the demand.

What’s the right mix of skills to exponentially increase your earning potential – and hiring options? According to our data, skills in UI design, UX design and web/visual design will give you the best shot at earning over €2,500 per month.

What are the hiring trends for designer jobs in Estonia?

Offers on MeetFrank for designer jobs in Estonia increased by 43% in the first 6 months of 2019, compared to July to December 2018.

Our data from the period between January to July 2019 showed that mid-level designers were in highest demand. Offers for senior designers were second with demand for lead designers closely following.

There was much less demand for entry level designers and executives, while the demand for junior designers was fair. Those are the trends from the perspective of employers though. What about candidates, what are their interests? 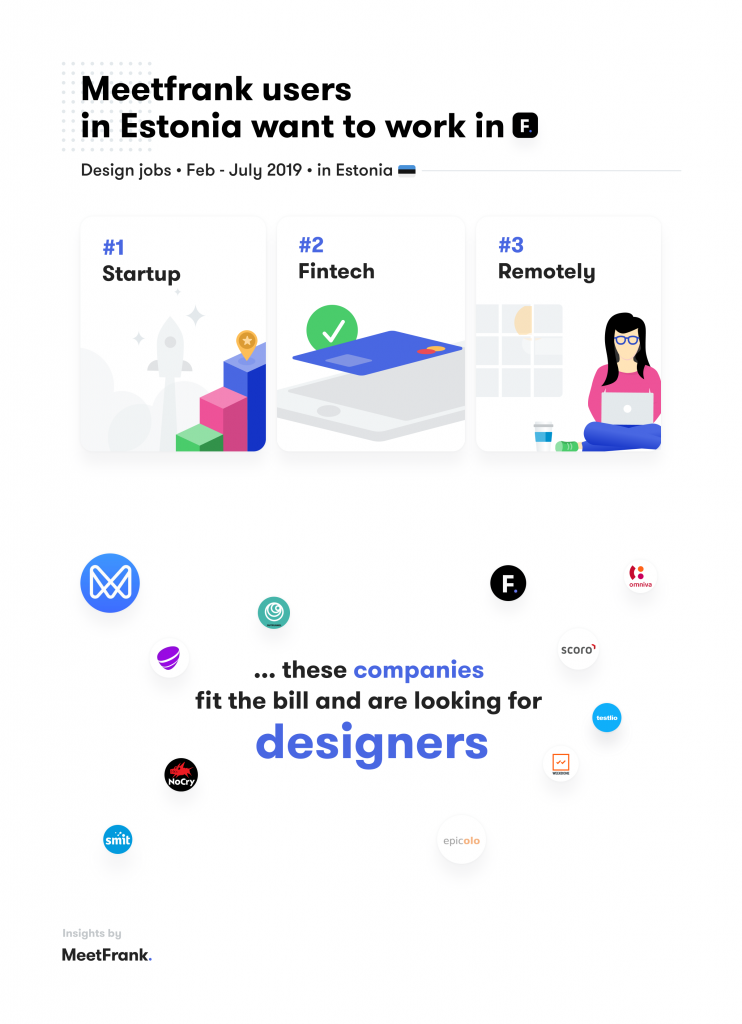 We found that most MeetFrank users want to work for a startup, in Fintech and in organizations that offer remote work.

Several companies fit this bill too. They include MeetFrank (won’t you love to work for us), Monese, Testlio, Weekdone, Telia, Outfunnel, SMIT, Scoro, Nocry, Epicolo and Omniva. 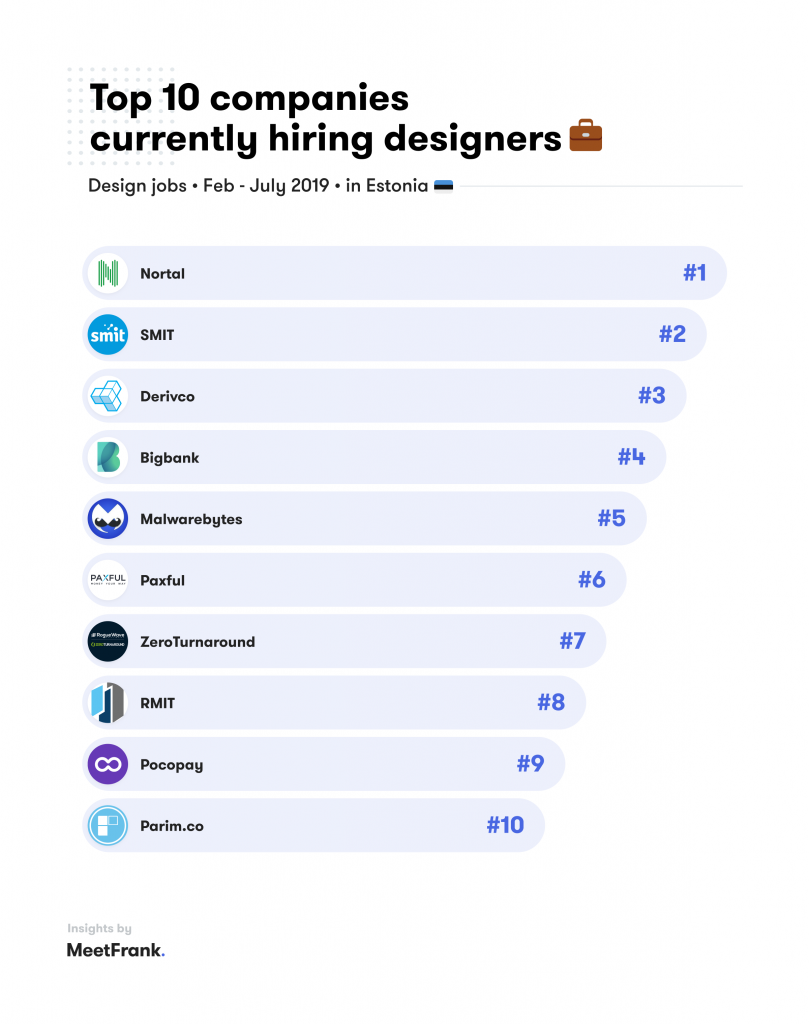 It’s a fine time to get on board with companies hiring for designer jobs in Estonia. We hope we have been able to provide you with the insights you need to make the best decision possible.

If you feel there’s a need for more insights, then you can check out the MeetFrank app on Apple and Google playstores.

MeetFrank is an employment solution that provides benefits for recruiters and talent alike. Companies looking to add some needed agility and cost-efficiency to their recruitment process can use MeetFrank to save valuable time and money.

Using the platform is pretty simple too. To get started with MeetFrank or just to see how it works, schedule a demo call here and we’ll get in touch with you.