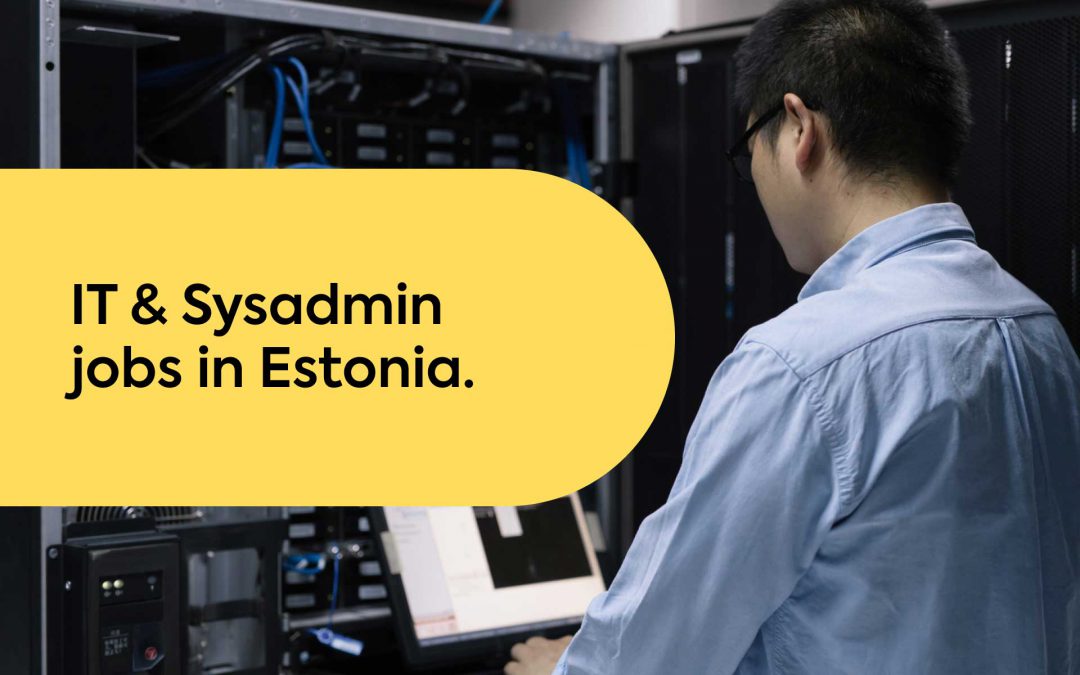 It’s no longer news that Estonia is widely regarded as a paradigm for what a digitally enabled society should look like.

In fact, the nation’s proficiency in ICT is so highly regarded, that its IT tools are trusted by more than 128 countries around the world. This has contributed to Estonia’s status as “the world’s most digitally enabled nation”.

There’s a lot of data behind these facts though. Why exactly are IT jobs the most sought after in Estonia? What makes them the best paid in the country? And most important, what do you need to stake a claim for these jobs?

Relying on insights gathered from the MeetFrank app, we’ll answer all these questions and more in this article.

Estonia is a magnet for IT jobs

When it started its drive towards committing to IT as a national strategy in the mid-1990s, the Estonian government could hardly have anticipated its success. About 25 years later, the country has risen to become an IT force in the EU and worldwide.

IT is woven into the fabric of Estonian society and government. Information technology forms a critical part of school studies, from primary school onwards, and the country’s tertiary institutions routinely churn out experts in several aspects of IT.

The country is recognised as #3 in Europe, in share of ICT specialists employed in the country. Its workforce is extremely skilled and multi-lingual, with expertise in major computer languages, data analytics, UX and cyber security.

Naturally, this deep expertise has made Estonia a hotbed for IT and digital initiatives. The country is home to NATO’s Cooperative Cyber Defence Centre of Excellence and companies such as Telia have started trialing 5G in the country.

IT behemoths such as Microsoft, CGI, Fujitsu, Kuehne+Nagel and Arvato have made a long-term home in Estonia. And massive homegrown companies such as Transferwise, Fortumo, Playtech and Pipedrive are pushing the boundaries of IT as we know it.

IT is essentially a natural resource in the country, and this, coupled with the government’s staunch support for IT policies has made the country a digital Mecca.

What’s the bottom line? You’re unlikely to find any other country in Europe that has such a potential for the best IT jobs as Estonia. That’s why IT jobs in Estonia are highly sought after within the country, from around the EU and around the world.

Employers are massively hiring for IT jobs in Estonia

Considering the bone deep significance and government encouragement of IT in Estonia, it’s natural to expect that IT jobs won’t come easy in the country. After all, with the high-level support that IT enjoys in the government and the focus placed on IT in education, Estonia should be drowning in IT experts.

However, nothing could be further from the truth. Perhaps, it is a mark of the great opportunities in Estonia that the country is not over-saturated in IT talent. In fact, as at April 2018, Estonia’s Minister of Enterprise and Information Technology was quoted as saying that the country’s ICT sector was lacking “about seven thousand professionals”.

He further stated that “[t]he labour demand of Estonian companies is so high that there are not enough Estonians interested in working the digital field to recruit”. What this means is talent can essentially have their pick of IT jobs in Estonia.

MeetFrank data also confirms the hiring activity of IT companies in Estonia. Within the period between January and July 2019, the most job offers were made to senior IT professionals.

An almost similar amount of offers was made to mid-level talent, with offers for lead and junior talent rounding up most of the demand. The least offers were made to junior talent and candidates for executive positions. 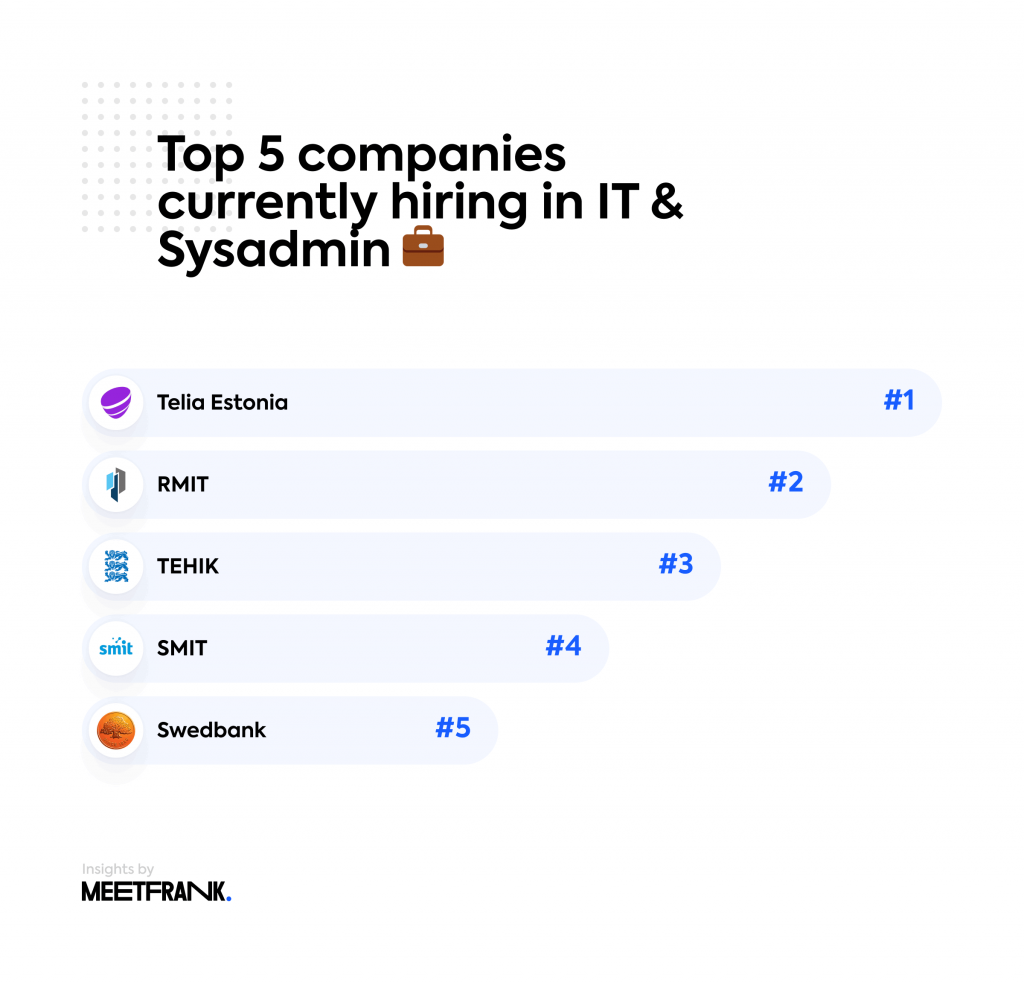 The top ten companies leading the hiring for IT and systems admin professionals include telecommunications giant, Telia Estonia, and banking giant, Swedbank. Others in the top ten include RMIT, TEHIK, SMIT, Inbank, Nortal, Erply, Avalanche Laboratory and Turnit. 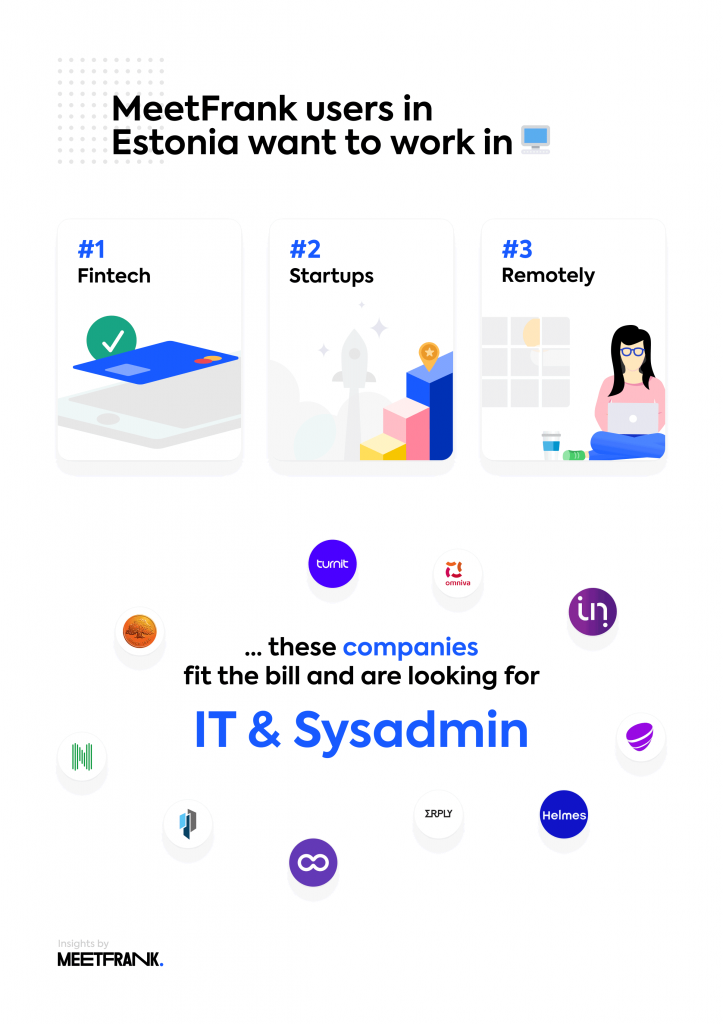 IT talent in Estonia are also making their work preferences known on MeetFrank. Most want to work for Fintech companies, startups and from remote locations. Several companies fit this profile and also happen to be hiring IT and systems admin professionals right now.

IT jobs in Estonia are well paid

With the well of opportunities that IT jobs in Estonia provide talent, it goes without saying that the profession is quite lucrative. 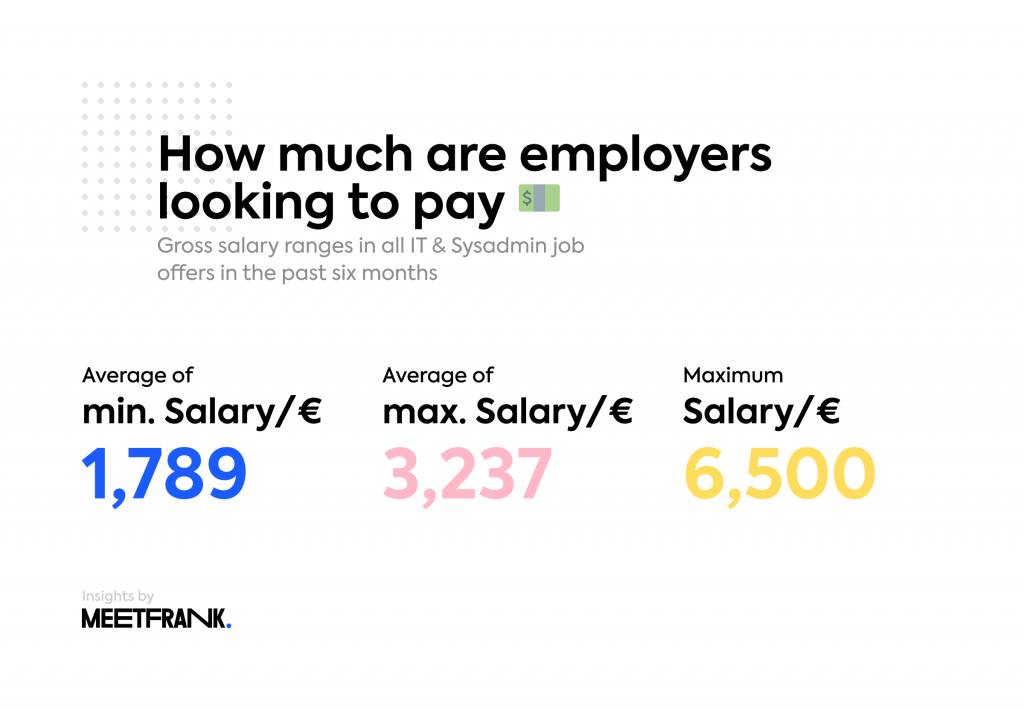 MeetFrank data on IT and systems admin jobs also confirms this data. Overall salaries for the first half of 2019 were pegged at a minimum average of €1,789 and a maximum average of €3,237. The highest salary earned during the period was €6,500. 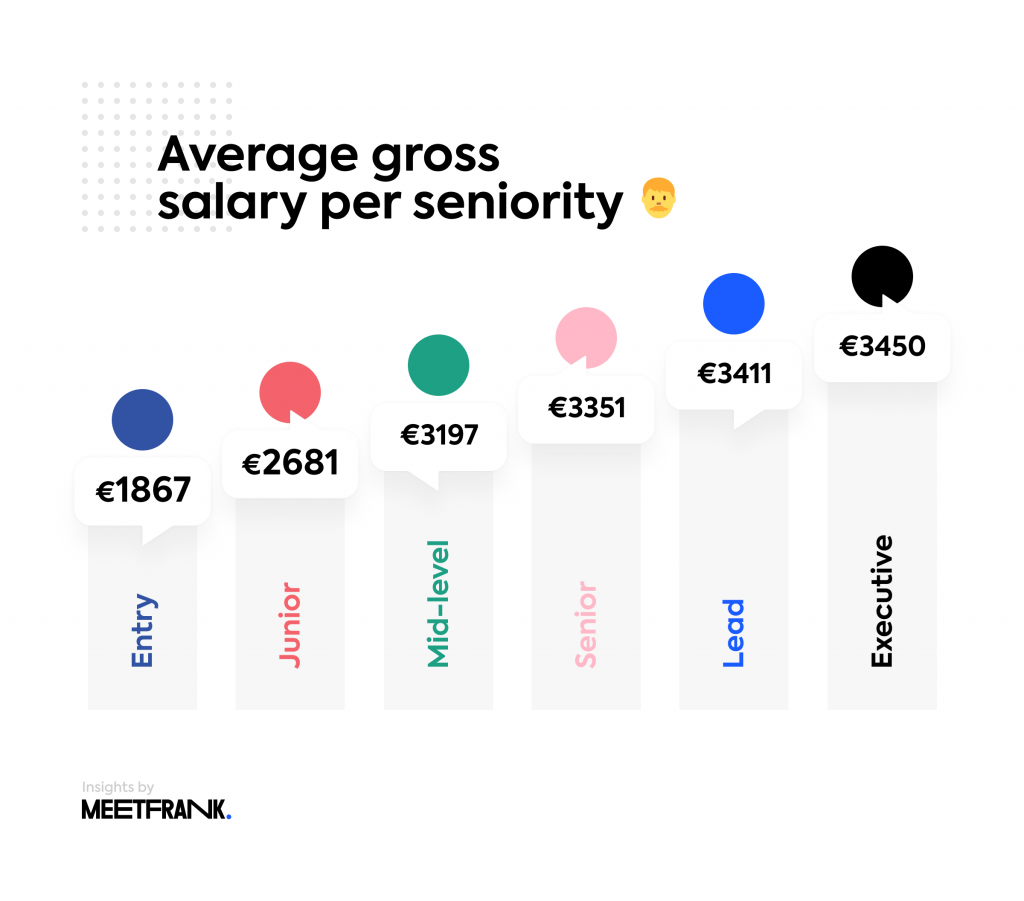 The averages from month to month are also consistent with national figures. The averages generally held between a high of €2,838 in June and a low of €2,180 in March.

Do you have the skills to succeed in IT jobs in Estonia?

IT jobs are very skill-intensive. To thrive in these jobs, talent must not only possess very good skills, they must also possess healthy doses of the right skills. From the job offers made on MeetFrank, we tracked the skills that employers were keen to find in talent. 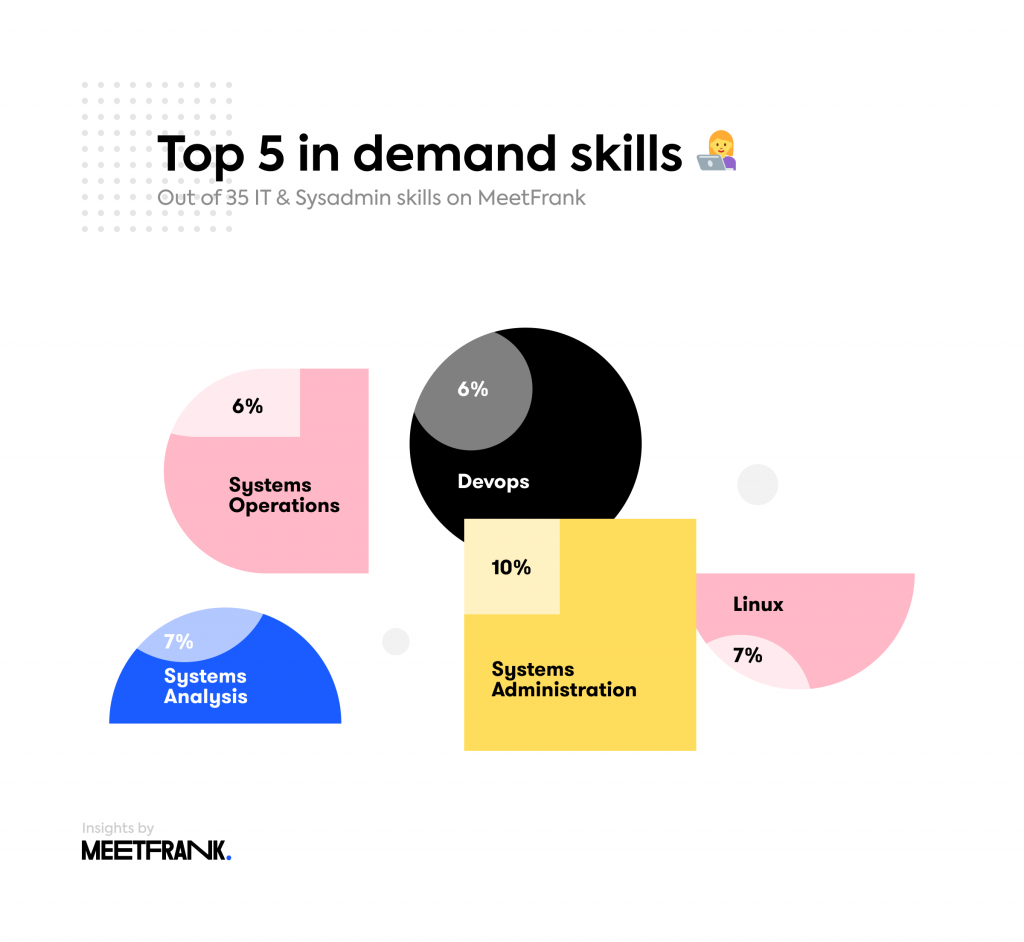 Of the 35 tracked skills, we pulled out the top 5. Taking up approximately 10% of offers, systems administration was the most sought after skill for IT and systems admin jobs in Estonia.

Linux and Systems Analysis followed in second, being required in 7% of job offers each, while DevOps and Systems Operations were joint third, with 6% each. 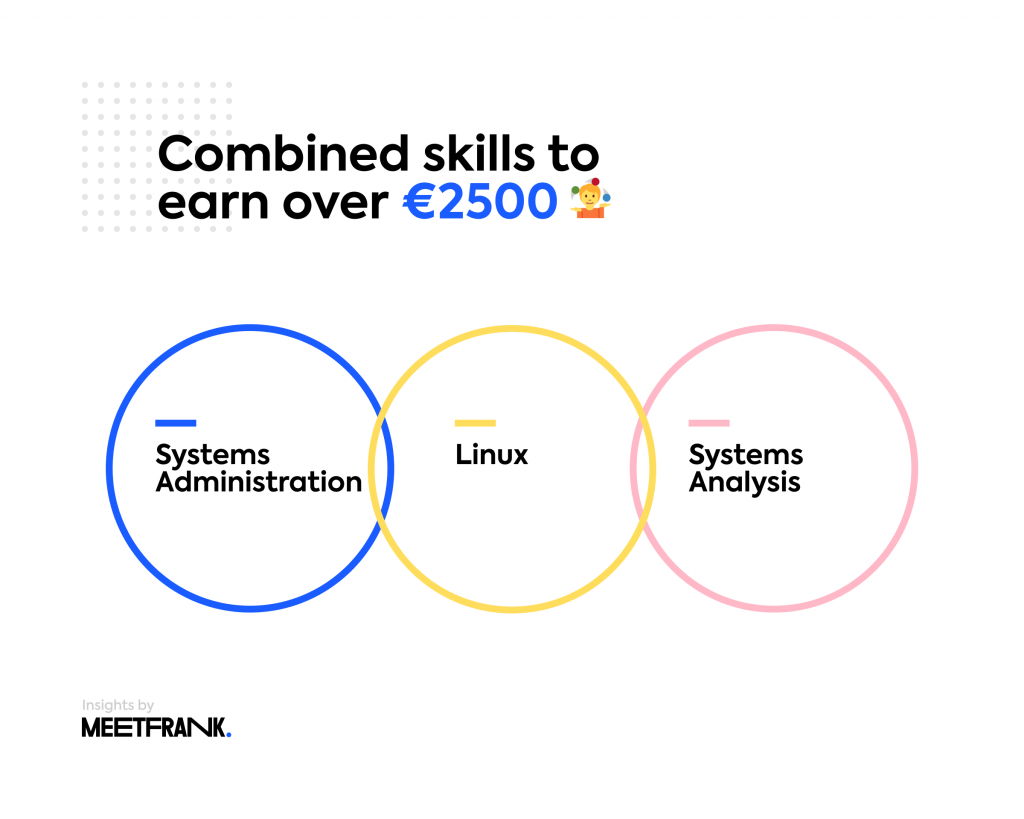 Unsurprisingly, the skills that talent would need to earn very high, at least above €2,500, are the same skills in the top two: Systems Administration, Linux and Systems Analysis.

Find all the info you need on MeetFrank

As the data reproduced here shows, talent just may hold the advantage in the market for IT jobs in Estonia. Talent is just a tad scarce in the market and salary trends are on the up and up. Not a bad market for talent, in all.

Information of this nature can help qualified candidates make intelligent decisions about job offers and opportunities in the Estonian IT job market. And that’s not even the tip of the iceberg. Check out our app for Apple and Android to find even more information about who wants to hire you and what they have to offer.

MeetFrank is also perfect for companies that want to get a pulse of the market, so they can know what the perfect candidate looks like. Recruiters don’t need to sort through thousands of CVs when they can find the right talent with a few clicks. Reach out to us to see how MeetFrank works for companies.