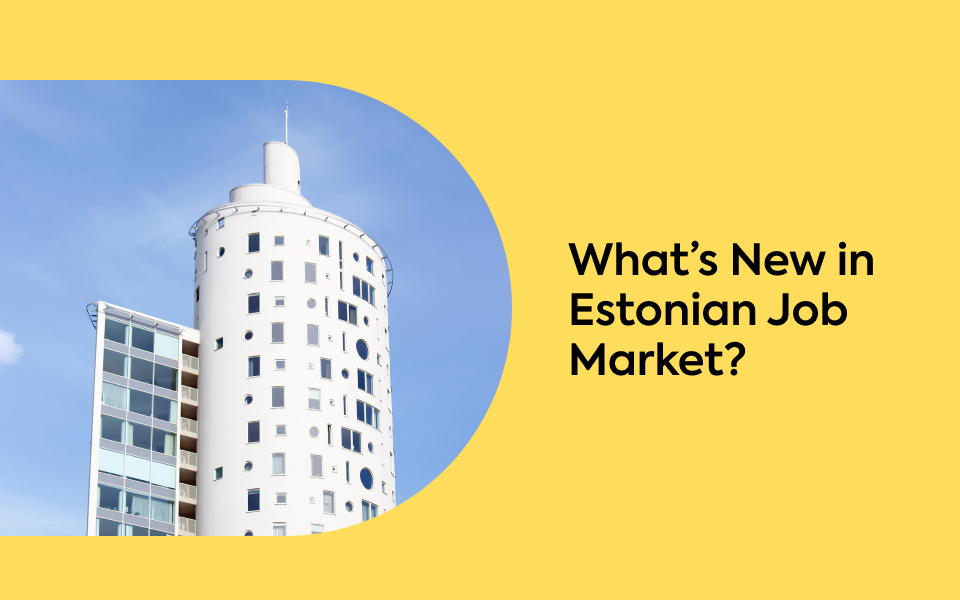 This article is based on data from MeetFrank Job Market Insights. For additional and per-track reports, visit this page.

Home to many pioneering companies such as Skype, TransferWise, Pipedrive, and Bolt, Estonia has lately been challenged by the impact of coronavirus, like the rest of the world. Let’s see what the second week of May has brought. 🌟

Before getting started, here is an overview from last week’s report ➡️ May started a bit foggy for the Estonian job market, which saw a decrease in the number of job openings twice in a row. Meanwhile, job-seekers remained active across all sectors.

Before diving into the ocean of this week’s stats, here come two friendly reminders:

👉If you’re an employer and want to hire people, you can join the Meetfrank family and contribute to increasing the number of next week’s job offerings.

👉If you’re looking for a job, ‘the’ opportunity might be waiting for you in the MeetFrank app. Download it today!

Now, let’s see what the stats from the Estonian job market show us about this week! 🔎

A week ago, we saw a 9.7% decrease in the number of active job openings as a continuing trend from the previous weeks. This week, the downward trend continues with an approximately 8% decrease.

Given the data, the ratio of the number of job openings to the number of the active job-seekers remains similar to that of the past few weeks.

Finding a job in Estonia remains fairly challenging. Also, last week brought about another round of terminations in Estonian startups – Pipedrive and Veriff laid off parts of their team. So the market is going to get even more competitive. 😟

On the other hand, if you are working in the construction or IT & Sysadmin sectors, it will be ‘very easy’ for you to find a job in Estonia nowadays. So, now is the time to update your resume and send it out on new journeys! 🚀 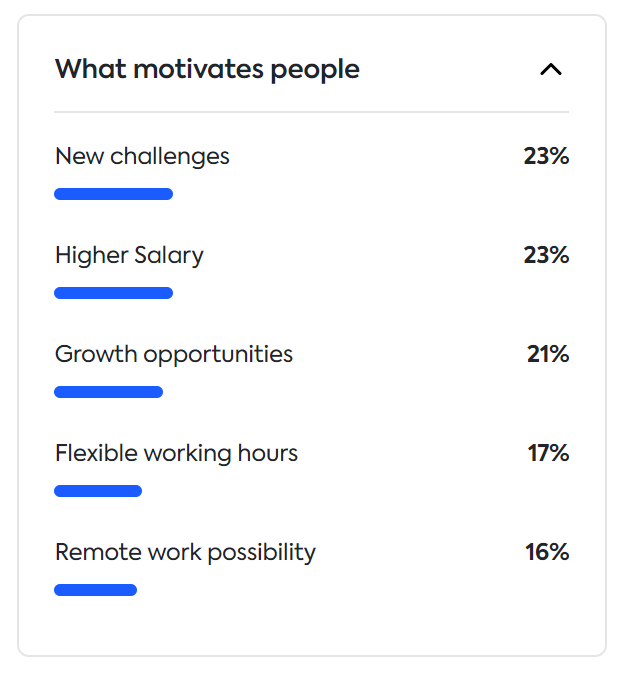 Who said that salary is the most important criterion when looking for a job? It seems the job-seekers in Estonia are also challenge lovers and look forward to more growth opportunities as well as higher salaries.

We hope you got the message, dear employers. 🤓

It’s also important to keep in mind that the Estonian government has recently announced emergency economic packages for companies and specific industries. In addition to that, we’re hearing talk of normalisation more than ever. So, let’s keep our heads high and hope for the best for the rest of the month. 🙃

Weekly special chart: TOP 15 Companies with the most applications in 2020

Every week, we zoom in on a special chart and discuss it from different angles. Now, it’s the turn of the Top 15 companies with the most applications in 2020.

At first glance, it’s a pretty colourful list including sectors from ride-sharing to SaaS, food-delivery to finance, and recruitment to banking. By the way, have you seen who’s in 3rd place? 😊 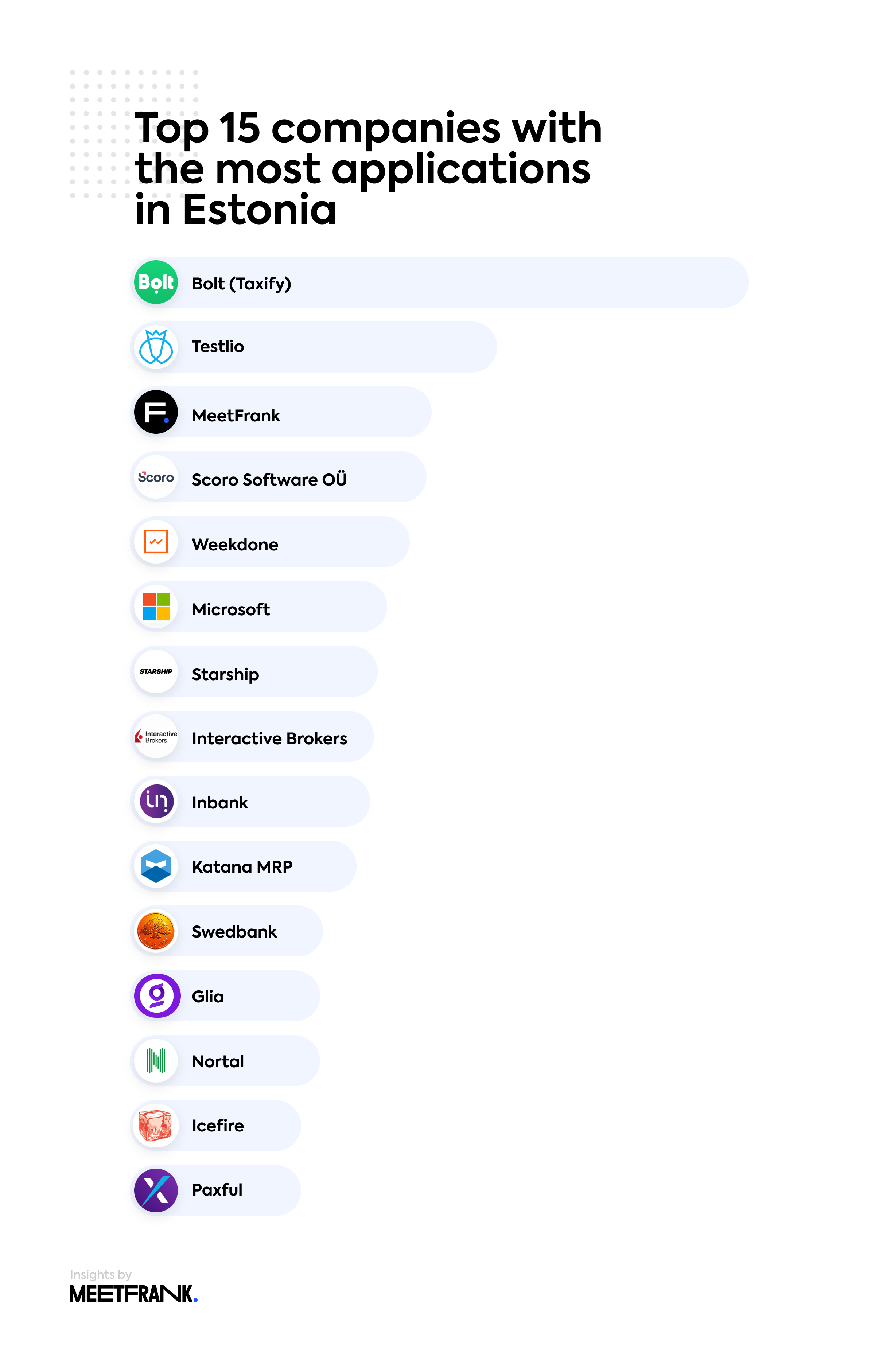 Since the beginning of 2020, the top 6 companies in Estonia which have attracted the most applications have been Bolt, Testlio, (drum roll, please) MeetFrank, Scoro Software, Weekdone, and Microsoft . 🥁 They are followed by companies in the banking, finance, software, and technology industries.

It seems mostly SaaS, software, mobile application, and tech-related companies in general have been sparking interest since the beginning of 2020. As Bolt, ranking first in the list, has recently launched its grocery delivery services in Estonia, food delivery can be accepted as a front-runner industry, in addition to ride-sharing.

The data shows that relatively young but already successful companies such as Bolt and MeetFrank (yay!) have succeeded in attracting more talent than the global giants.

While the big hitters are still the center of attention, there is a growing interest in young and fresh Estonian companies. 🎆

When it comes to the number of job openings, there has been a downward trend since April due to the current situation worldwide. From the chart below, we can see that the numbers haven’t changed for the last 3 weeks. 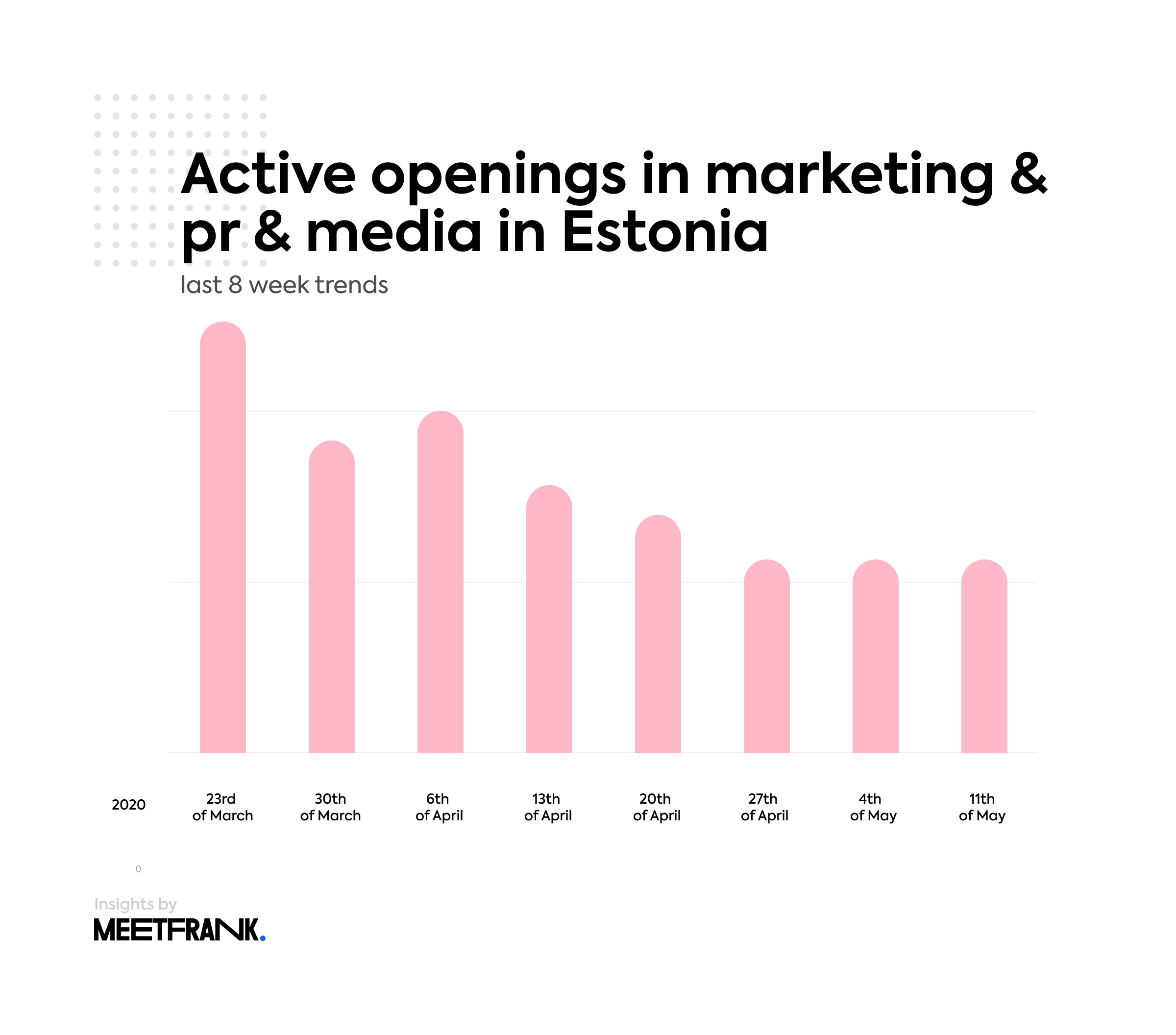 April saw the highest leap in the number of job applications. There has been an increase last week as well, which might be related to the recent layoffs in Estonia. 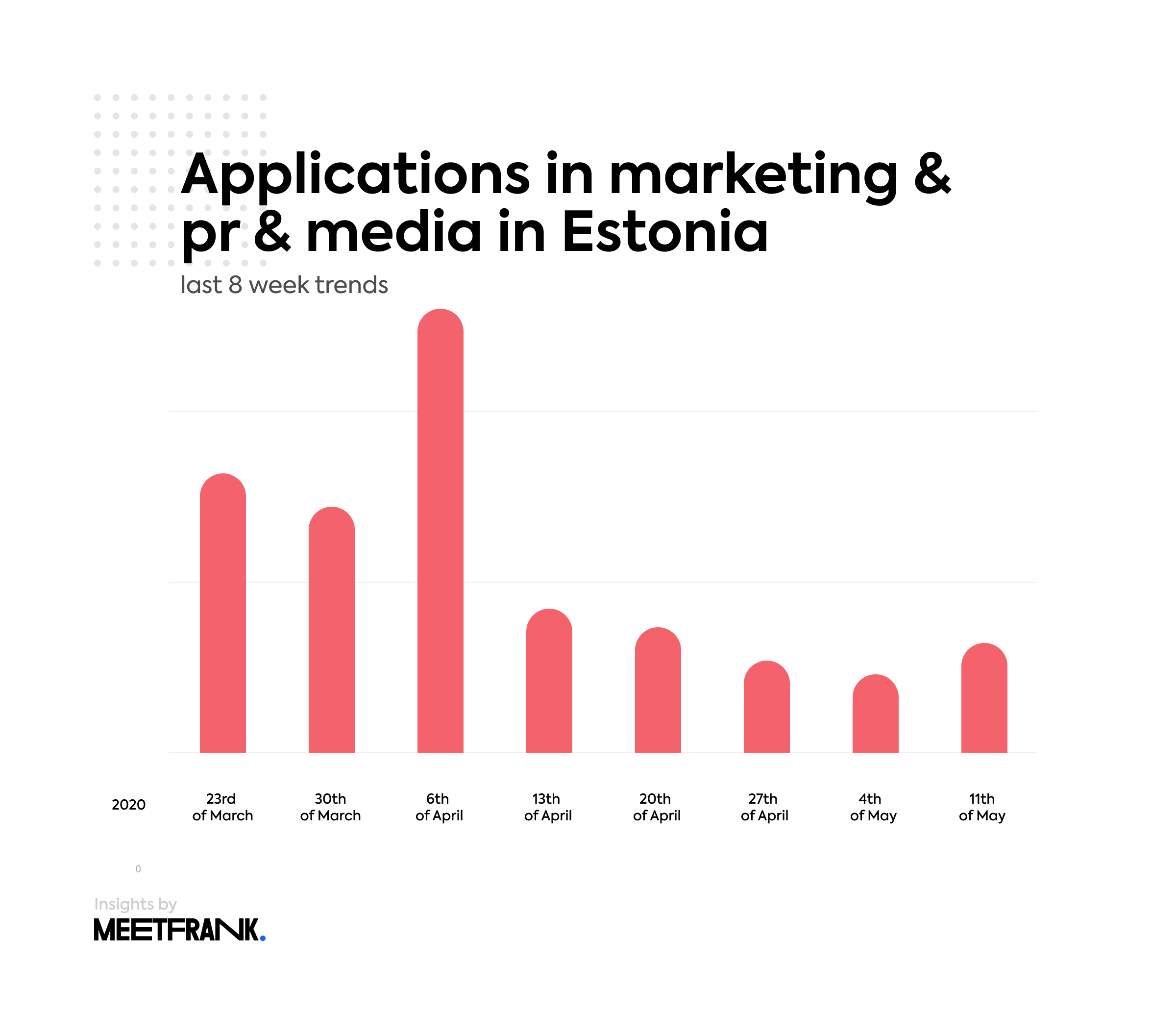 At present, the Marketing & PR & Media sector in Estonia is not experiencing its best days.

Out of more than 3,000 members of the talent pool in Estonia, 15.1% of them are actively seeking a job, which makes finding a job in this industry challenging. 🤔

The numbers show that high competition in the sector seems to have lowered the salary expectations of active job seekers until May. In contrast, companies increased their job offers to find the best talent until two weeks ago. 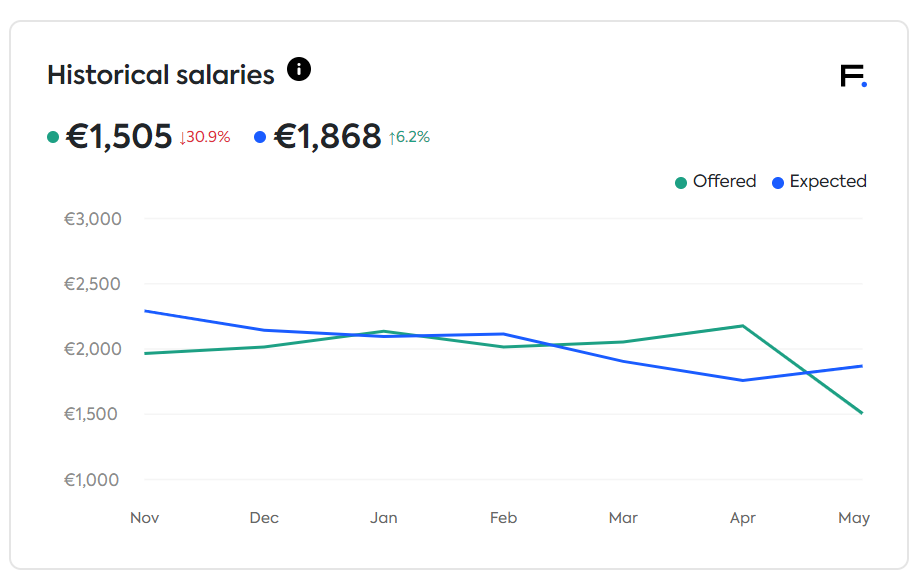 For the last 8 months, the expected and offered salaries have been involved in a complicated story. 🤔 At first, they went in different directions, met each other in January and February, and parted ways with an ever-increasing gap at the end of April. Recently, there has been a sharp fall in the offered salaries and a slight increase in the expected salaries. 🎢

It seems that the crisis is affecting expectations and offerings in different ways, leaving a question mark for whether their paths will cross again or not in the upcoming weeks. 👀

Looking for a role in Marketing & PR & Media and feeling even more motivated after hearing about the offered salaries? 😉 Here are the most recent openings in the industry:

Wondering which perks these companies offer to the lucky candidates? The Oscar goes to team events which companies in Estonia are very good at organising. 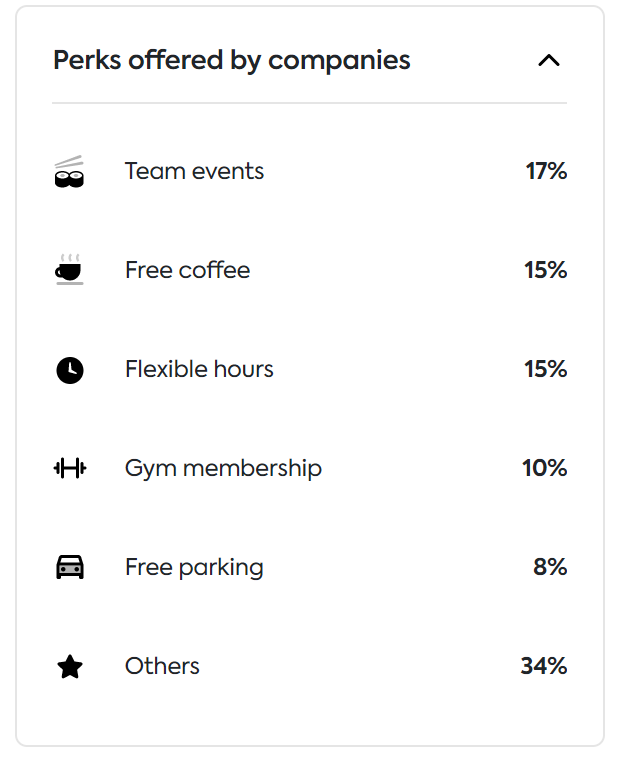 Apparently, free coffee is also a popular perk provided by employers. This makes perfect sense as they’d love to keep their teams up, fresh and alert for new ideas. ☕

👏The most popular job opening in Marketing & PR & Media has been the ‘Social Media Specialist’ role at Checkspot OÜ in the last 30 days.

Welcome to the MeetFrank family!

Let’s finish with some good news! This week, we welcomed Sharecloud OÜ, BCS Itera AS, and Reinvent Baltics to the MeetFrank family. 🎊

And here are the latest job openings from the Estonian job market. Have a look and see if any of them might be ‘the’ one!