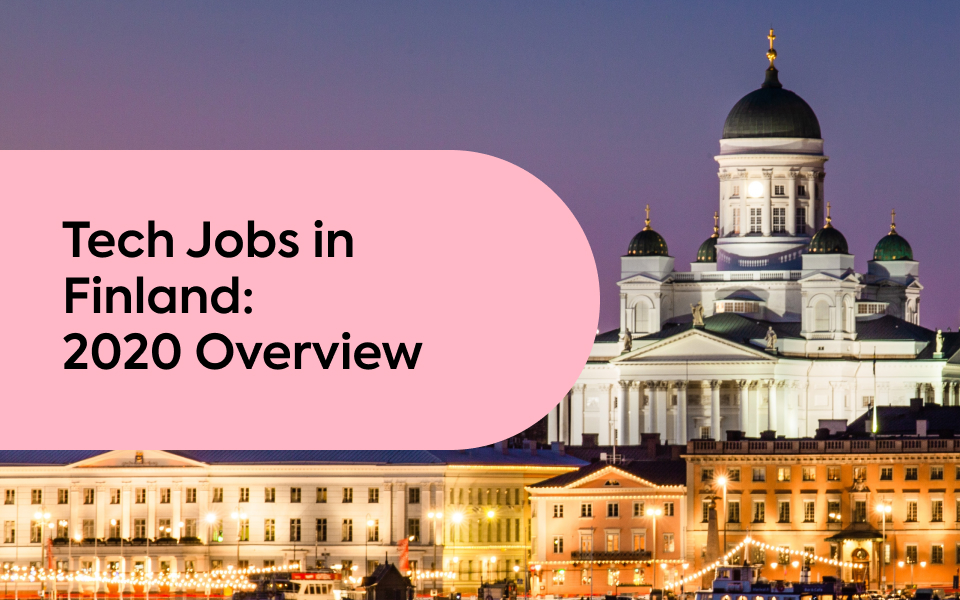 When thinking of technology and Finland, probably the first things that come to mind are the historic tech giant Nokia or the gaming sector comets Rovio and Supercell.

From all the signs we’ve encountered that a lot more is brewing in the land of a thousand lakes! Here are some of the highlights of what we’ve learned:

The Finnish tech sector in numbers 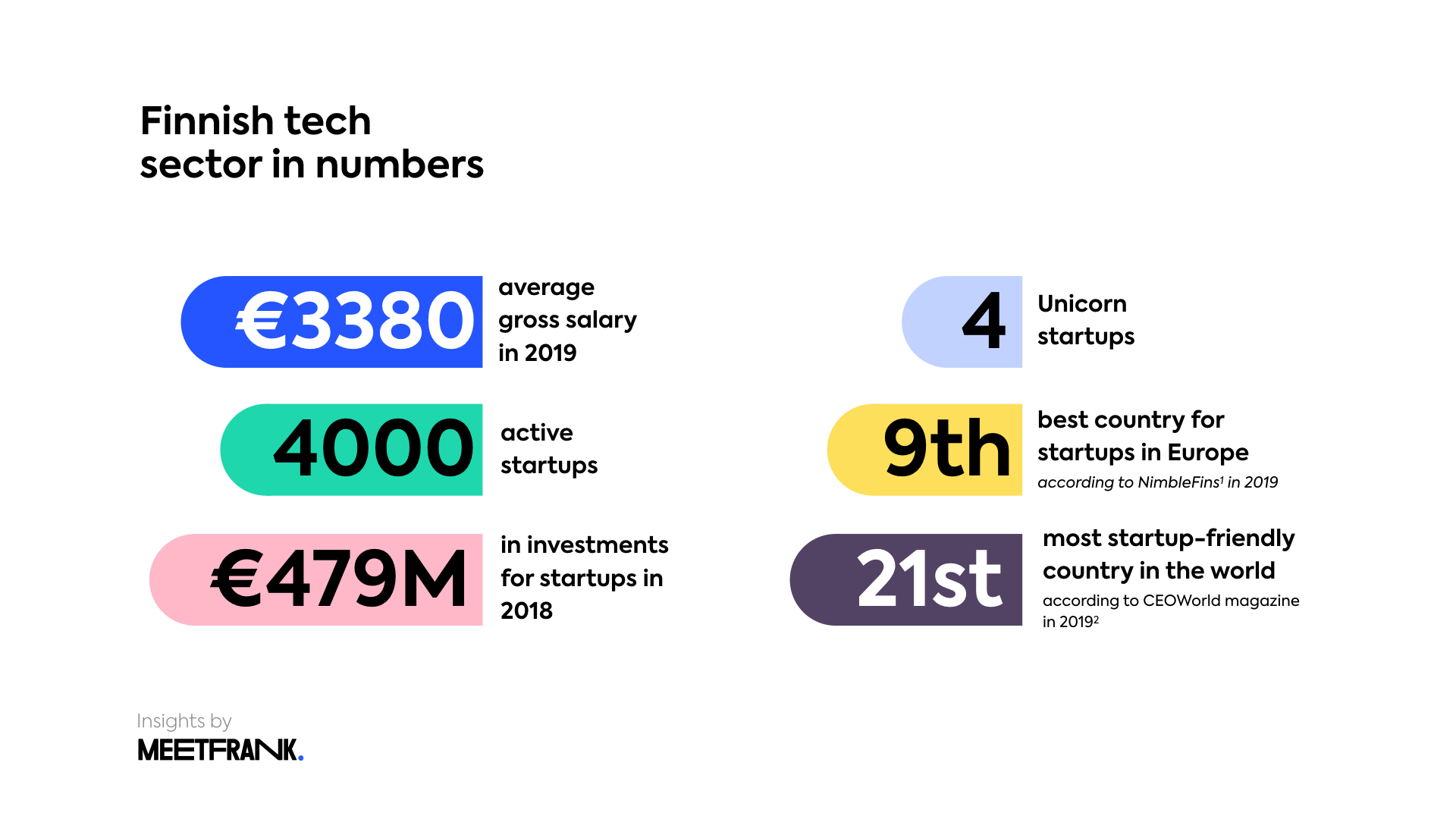 When Nokia, one of the biggest mobile phone producers during the 2000’s, sold its phone production brand to Microsoft and later failed, it was a big blow to the Finnish economy, but even more to their pride.

However, the layoff that followed, created a ripple effect and launched the success stories of Rovio and Supercell, the two gaming companies that became behemoths, employing the same people who lost their jobs in Nokia.

Fast forward to present day and we can see that the Finnish economy is at an even better place, as foreign investments are pouring in, the startup scene is booming and high tech production companies like HMD Global and Uros have taken over the torch.

Who are employers looking for in the Finnish job market? 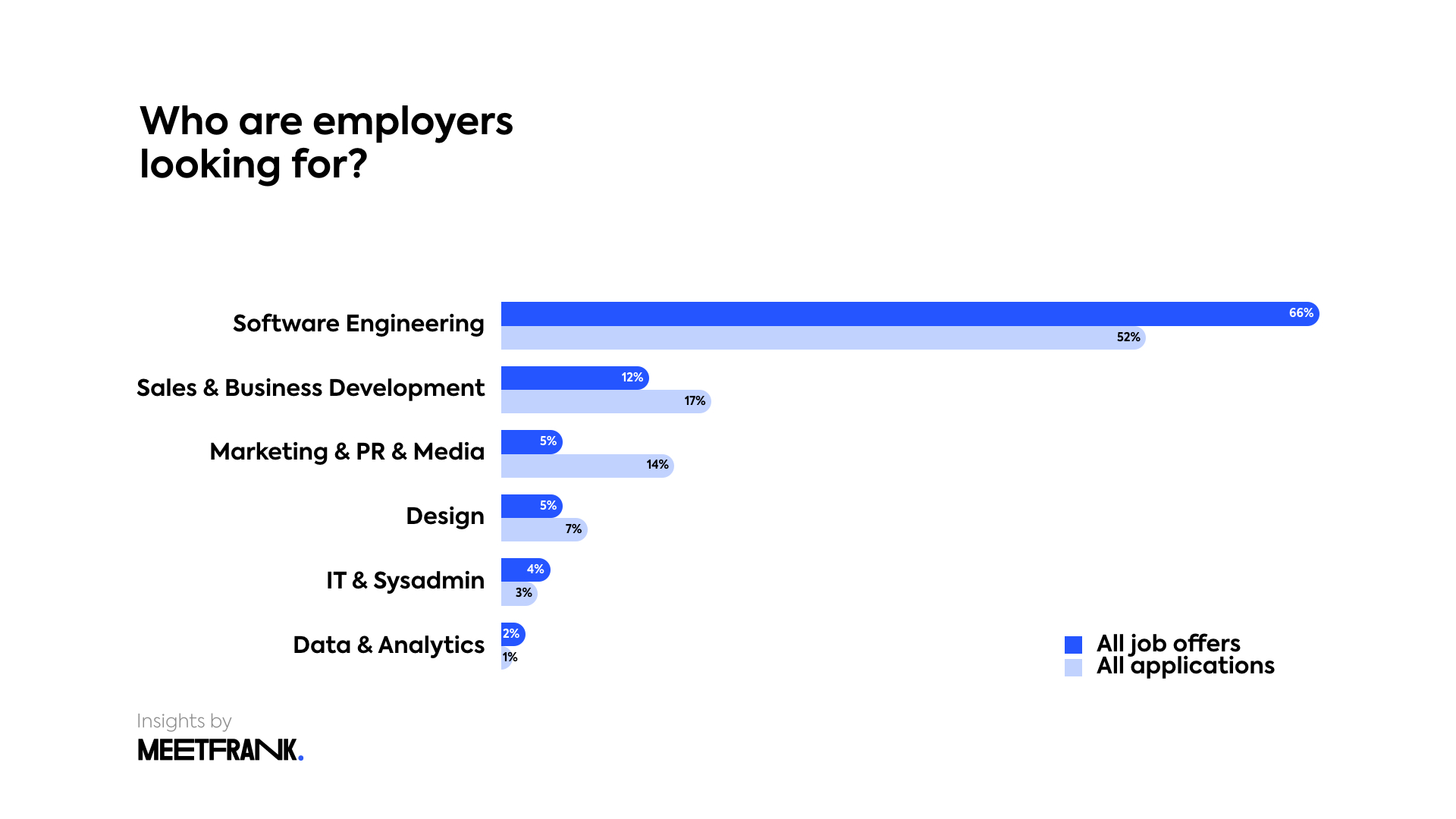 In the European tech sector currently, the most in-demand workers are the software engineers and Finland is no exception as 66% of all the work offers are in that field. As the ratio of all applications for software engineering jobs is considerably lower – 52% – it can be said that software engineers are enjoying quite a low level of competition compared to others.

It is exactly the opposite for the next three jobs in terms of job openings as the ratio of offers and applications is leaning towards a greater share of applications for sales & business development (17% vs 12%), marketing & PR (14% vs 5%)  and design (7% vs 5%), meaning that the competition is higher in these fields. 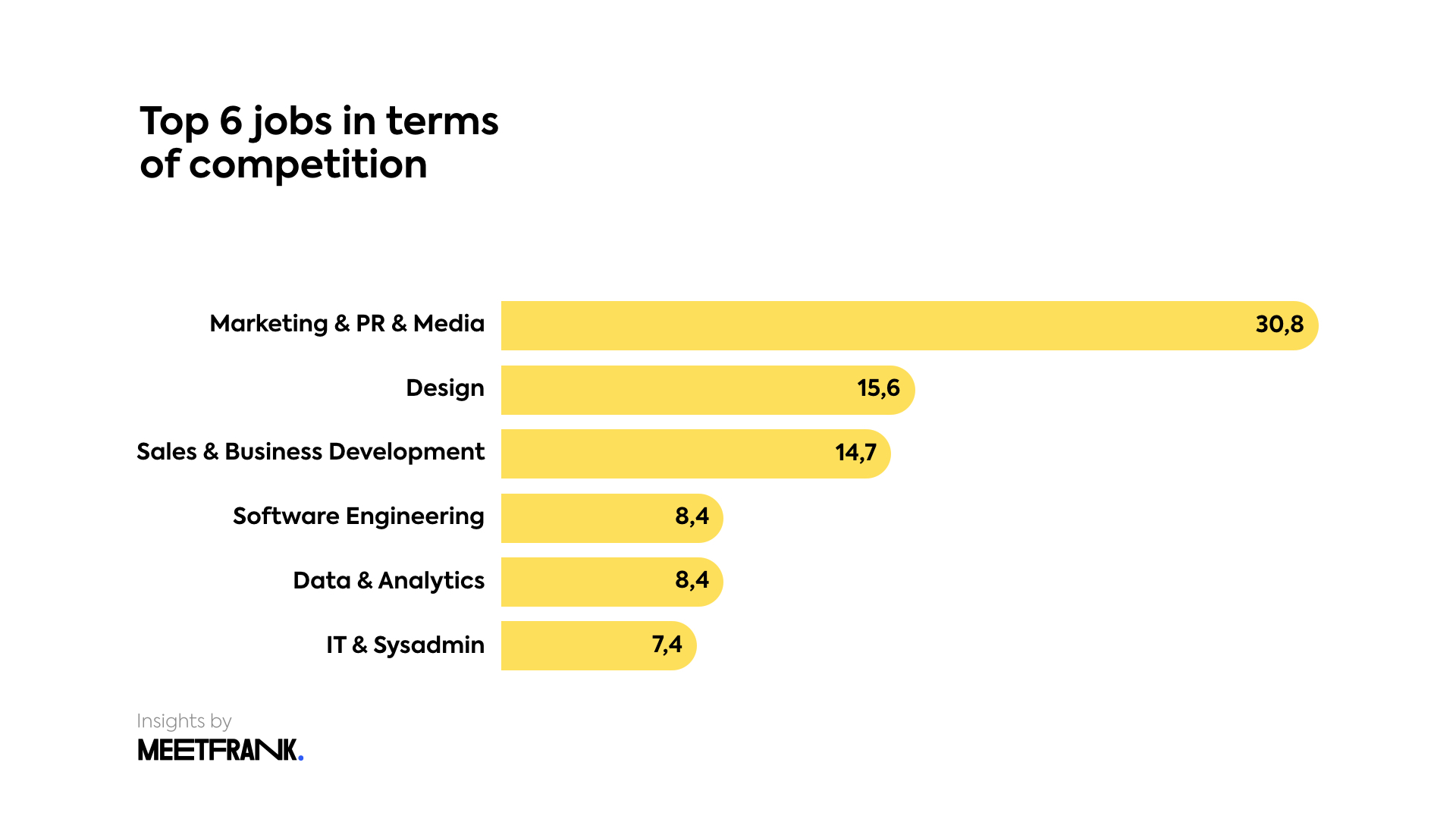 Job seekers of the more technical jobs can enjoy a relatively low level of competition as software engineering, data & analytics and IT & sysadmin all had around 7-8 applicants per job offer.

This also means that employers will have to go the extra mile to attract the top tech talent as the demand for them is high.

Although Finland follows a similar pattern with the rest of Europe – higher competition in the creative and lower in the technical fields – the average level of competitiveness for jobs is much lower than the Europe average, and so in all fields, we have data on. The biggest difference is for design jobs, as Finland’s competition is almost three times lower than the European average – 41 vs 15.6 people.

Salary offers of 6 most popular jobs 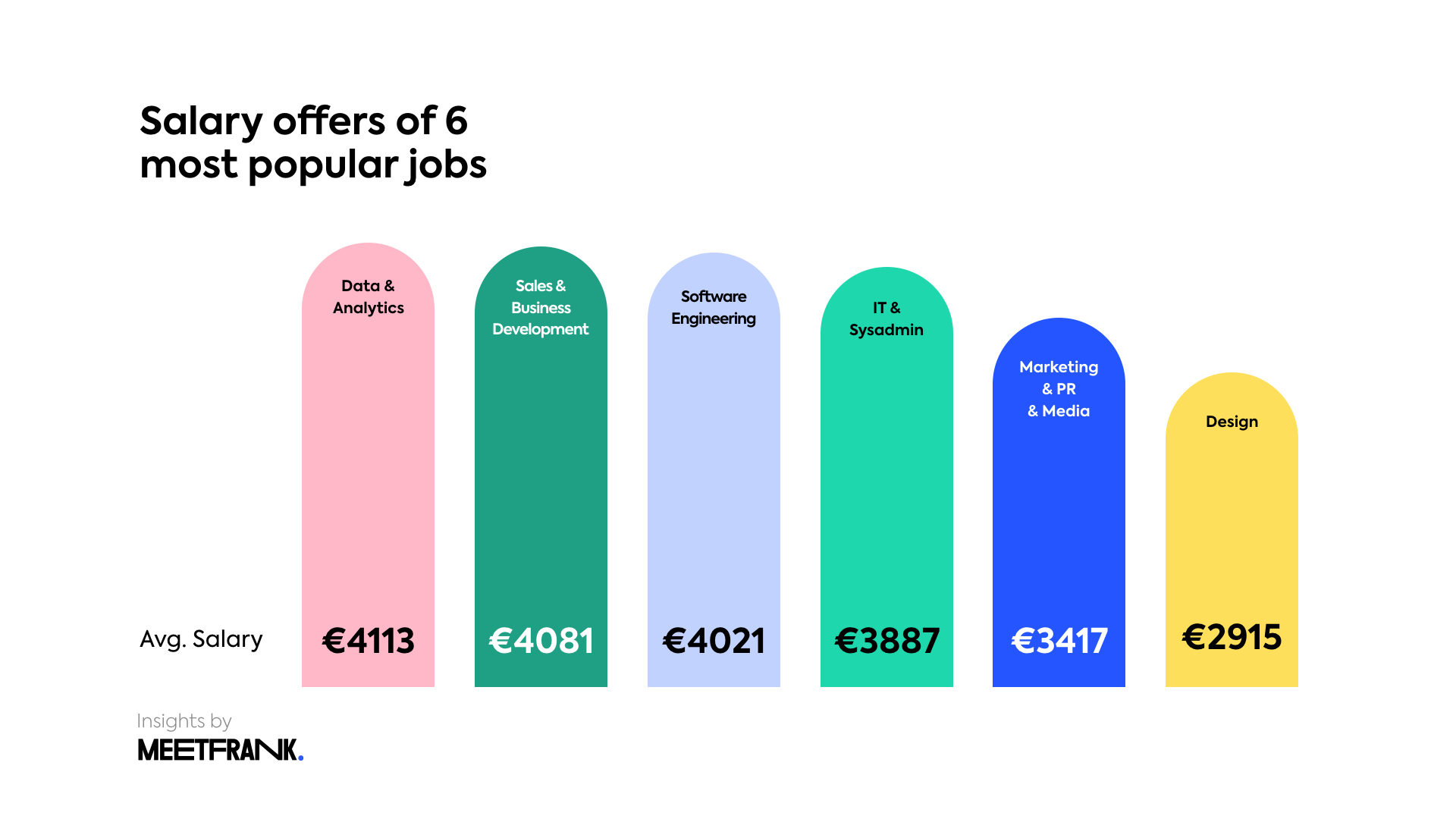 When looking at the average salaries of the 6 most popular jobs, Finland ranks way above the European average. The pattern is similar though: tech jobs, which, compared to creative jobs, enjoy a lower rate of competition when applying and a significantly higher payment.

Data & Analytics is the most well-paid job with a staggering €4113 average gross salary, followed by software engineering (€4021 gross) and sales & business development (€4081 gross), the only non-technical job among the better-paid ones, with IT & sysadmin not far behind (€3887 gross).

Marketing & PR and design, two of the fields with the biggest competition, are among the least paid jobs here. 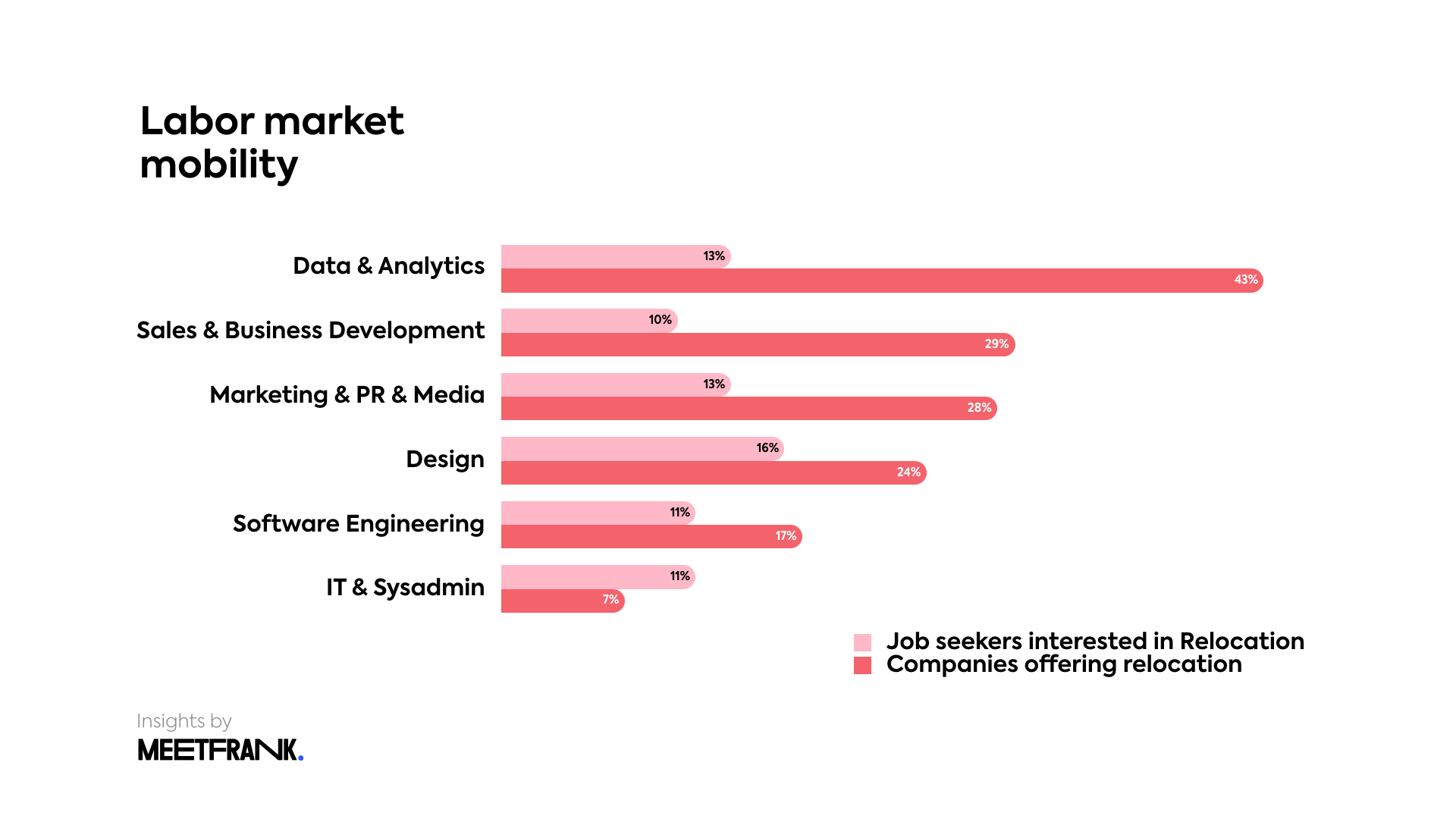 Although Finnish employers receive, on average, significantly fewer applications than the European average, the companies are nevertheless more hesitant in seeking labour elsewhere.
Looks like Finland is really missing some data & analytics specialists at the moment – it’s the job with the highest payment and a low rate of applications, so it makes only sense that its the job with biggest % of relocation offers (43%).

Finnish work seekers, on the contrary, are slightly more interested in the relocation option than the EU average, with 16% of designers and 13% of data & analytics and marketing & PR job seekers up for the potential change of country of residence.

Top 5 countries with applications to relocate to work in Finland 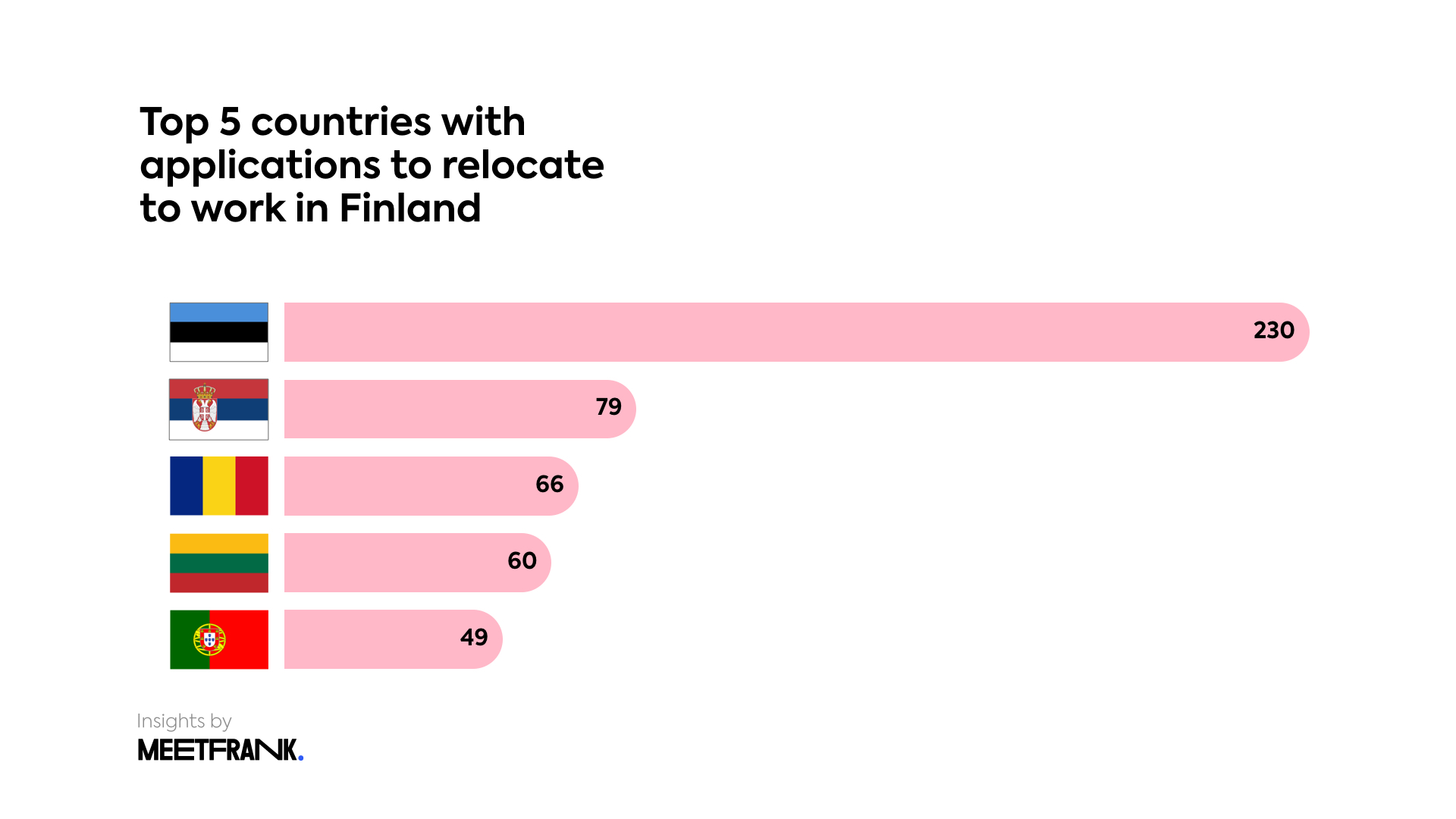 Finland’s southern neighbours are the most interested with relocating there, as around 6% of all applications for jobs in Finland are done by Estonians.

Applicants based in Serbia follow, with a number of applications that’s over three times smaller, along with Romanians and Lithuanians, all making up around 2% of the total of % of applications made for Finnish jobs. 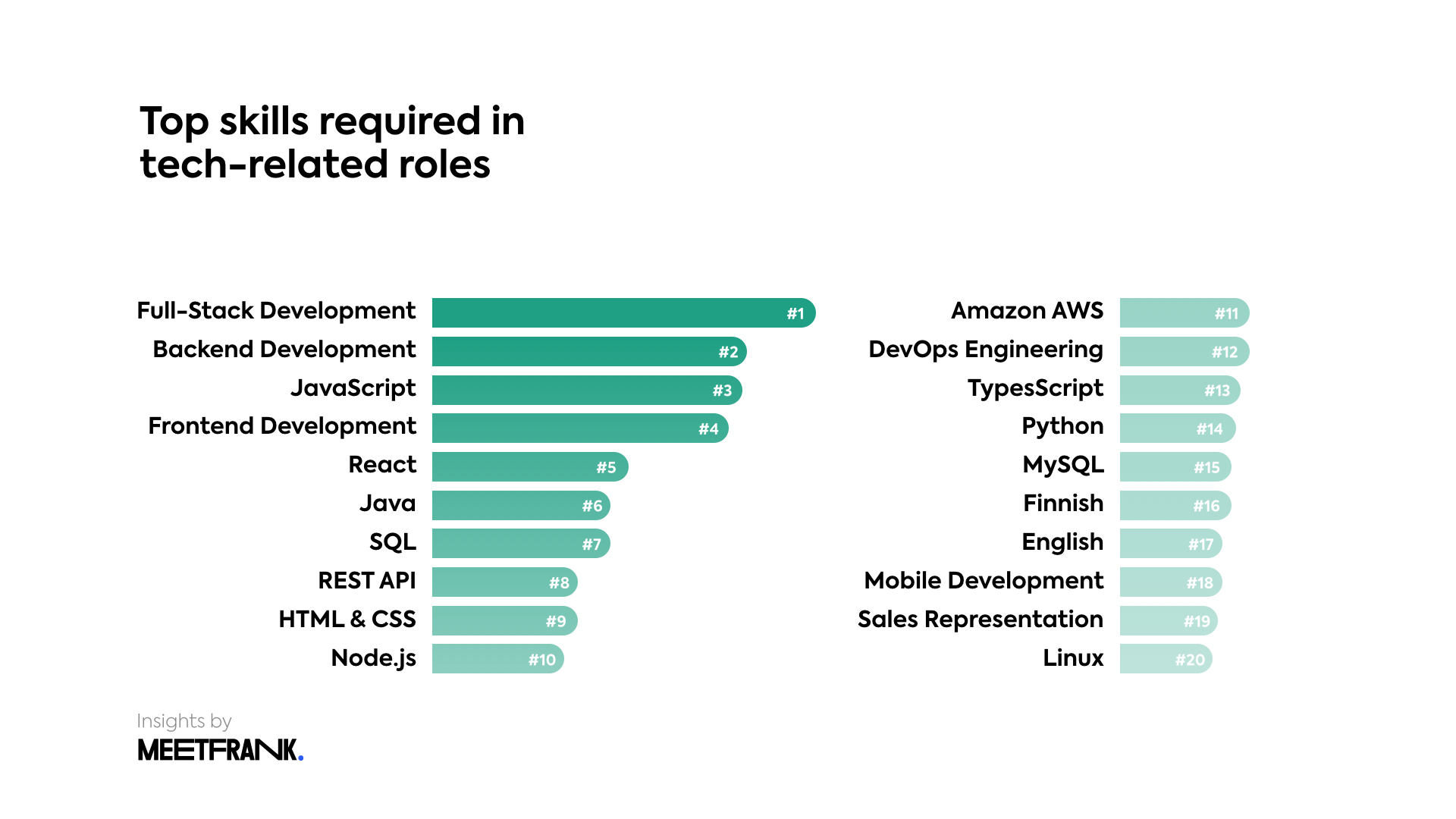 With software engineers being the most wanted workers, it doesn’t come as too big of a surprise that the most sough-after skills in Finland are currently full-stack, backend and frontend development, alongside with JavaScript. 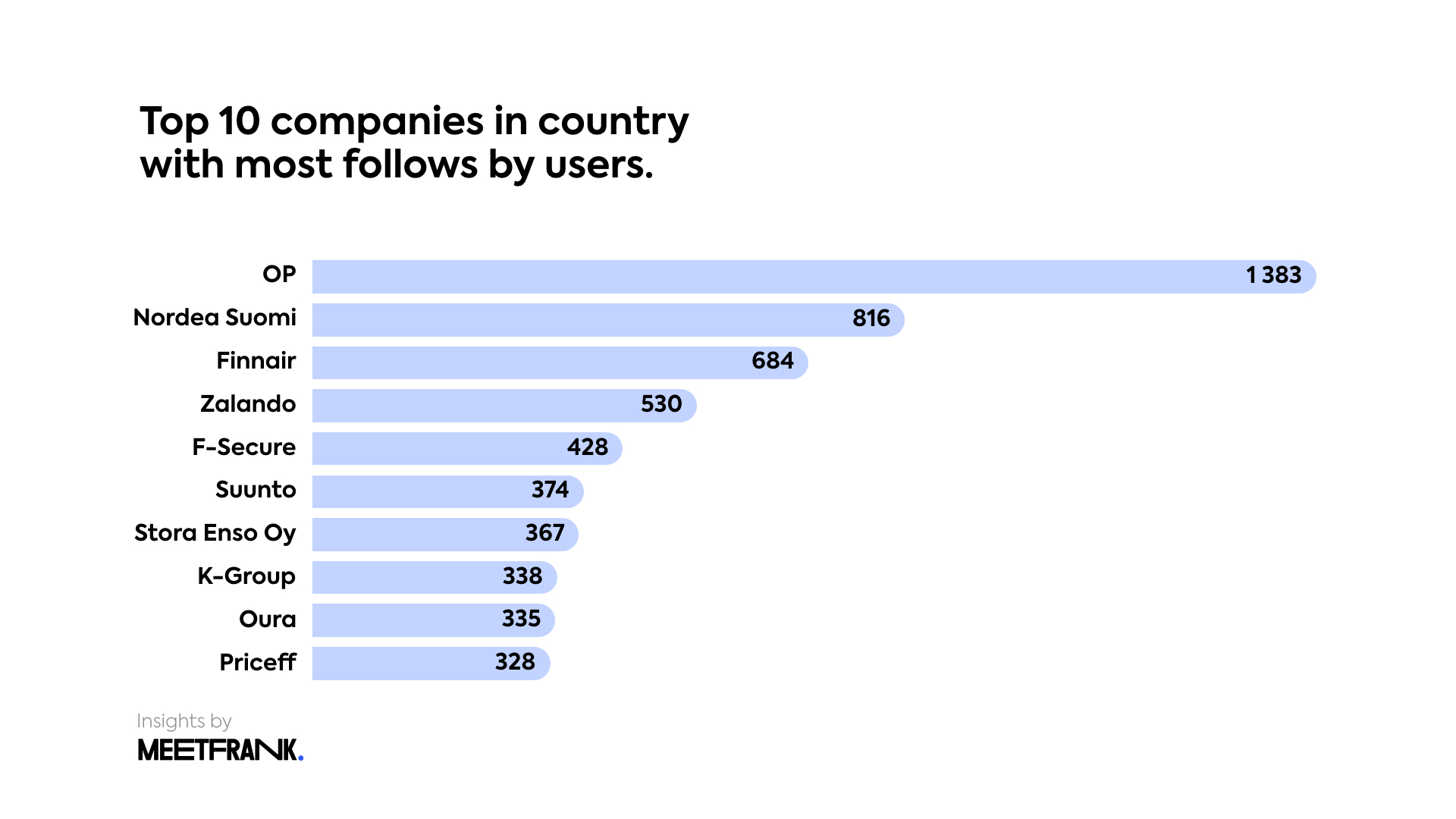 Among the most popular Finnish companies* that MeetFrank users have voted they’d like to work for is OP, a group operating in the banking, investment and insurance services. It is followed by the Nordic banking conglomerate Nordea’s local branch, Finnair and the online retail platform Zalando. Another retailer in top is K-Group / Kesko – a grocery chain that is striving to become the world’s most sustainable grocery trade company.

So, why work in Finland?

Finland is showing many signs of being on the way to becoming a European tech powerhouse, with some globally established high-tech companies, mixed with an exciting bunch of startups.

The salaries in Finland rank among the highest in Europe in the tech sector, while the competition for the jobs there is lower than the EU average.

A lot of the companies put an effort to become sustainable and the country ranks the highest in the world when it comes to living standards. What’s not to like? 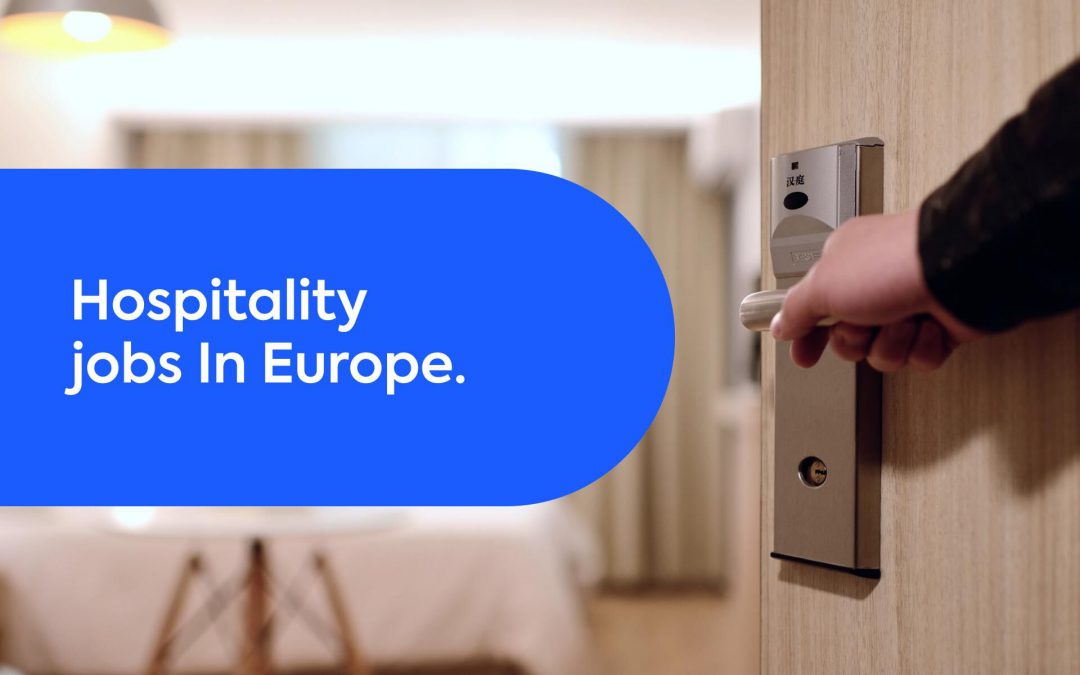 The fuss of the restaurant is like the background melody that never stops. The soft clanking of cutlery, the warm buzz of conversation, champagne bottles going pop. Waiters skilfully sneak around the tables. Barista grinds and brews the best drink ever existing in the world – coffee, and the smell drifts away. Bussers hastily carry away wiped clean plates without a notice. A hostess cheers new guests and walks them to the available table with the best view. A manager lurks and passionately observes how things are going. The kitchen has its romance. The chef is polishing up his masterpiece, while cooks follow the recipes with pinpoint accuracy.

Good news. Hospitality jobs are on their way. Each one of these and many other positions will appear in the MeetFrank app. We are growing non-stop so do employment opportunities. The time has come, so please welcome a new Hospitality industry many of our users have been waiting for. Europe strongly holds its position as the top tourist destination. It means more jobs in the Hospitality industry than ever before.

Now I`ll throw some numbers that explain why MeetFrank takes this industry onboard and why you should care. 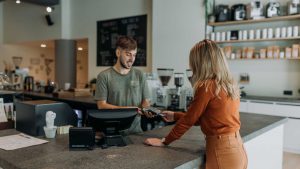 The figures show that Hospitality is one of Finland’s most dynamic industries.

Helsinki Times reports that the turnover generated by this industry amounts to €15 billion and contributes to 2.6 % of Finland’s GDP. The revenue comes mainly from foreign visitors, the number of which keeps rising and is 8.3 million.

The number of nights spent by tourists has increased by 1.3 %, reaching an impressive figure of 6.8 million. The travel industry in Finland is steadily growing, and we see positive growth potential in the long run.

The Hospitality industry currently employs around 150,000 people but is always craving for more. The Finnish Hospitality industry is facing a major deficit of talent, and companies experience difficulties in finding employees with matching skills. It slows down the growth of the industry. 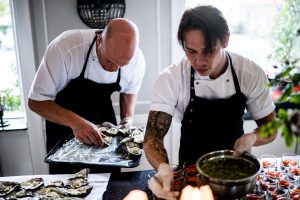 More than 5.2% positive change in foreign visitors arrivals shows that more tourists are coming and stay for longer.

The number of nights spent by tourists has increased by 4.4 % compared to 2018, reaching 4.9 million.

The Bank of Estonia estimates the proportion of expenses made by foreign visitors in the export of travel services to be almost 1.2 billion euros.

These numbers suggest that foreign visitors are a great opportunity for the Estonian market to boost the Hospitality Industry even more. 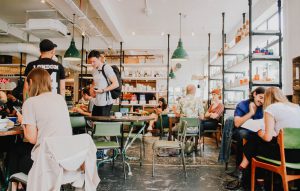 In Latvia, the hospitality industry is a fast-growing sector of the economy. Geographic location, rich cultural and historical heritage, as well as growth-oriented workforce, facilitate the growth. Those, who have been there, know what I am talking about. 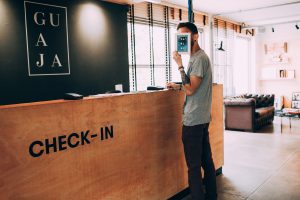 2018 was the most successful year for Lithuania with regards to tourist inflow. The number reached 3.6 m tourists that visited Lithuania.

The hospitality industry has its focus on the most successful foreign markets that bring the € in. Lithuania experienced rapid growth in the number of tourists coming from Germany and Japan.

The successful 2019 raises great expectations for 2020. The goal in the hospitality industry will try to support and maintain the increasing inflows of tourists.

What`s in it for you? 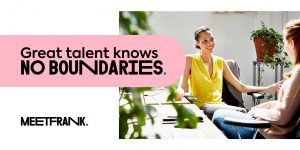 The hospitality industry sustains 16,6 million jobs in Europe, which means 1 in every 13 jobs. No more numbers, I promise. The markets experience a high demand for talents due to the upward trend in the Hospitality Industry. There is a positive correlation between the inflow of tourists and the growth trend in the Hospitality industry. The more days tourists spend in the country, the more work has to be done to provide them a service. At the same time, companies are unable to find the best talent fit and need extra hands.

MeetFrank is here to ease it up with the new relocation feature that aims at filling the gap in companies when finding the best match employees. You as a skilled talent being in high demand will be able to see opportunities abroad and connect directly with companies in the Hospitality industry and not only. We believe that talent is borderless. In today’s age, it doesn’t always matter where you are based. You are free to choose your best career path based on aspirations, not location. And even better, in many cases, jobs can be completely remote.

Check how it works here.

Give yourself a head start on the Hospitality job market with MeetFrank daily digest that you can find in the app.